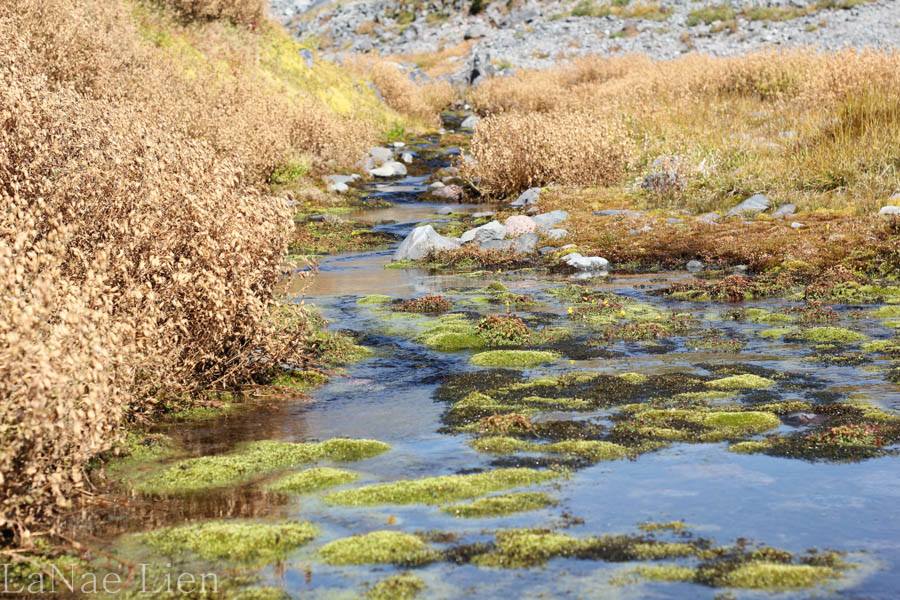 There is one specific hiking fear/paranoia that worms its way into my brain like an insidious fog every time we’re out on a trail. Bear.  I’m kind of surprised we’ve not yet stumbled across one.  The husband and I are pretty quiet hikers, preferring the solitude of our thoughts and nature to incessant yammering.  We also seek out less-traveled trails, or try to hit popular trails in the off-season.

My bear paranoia was heightened on a hike we took in Sedona, AZ a few years ago.  I have been known to pour over hiking books and websites to find “just the perfect hike.”  We’ve found some pretty perfect ones.  The hike that I chose on that particular day was different than those we had hiked on previous days.  Rather than hiking on top of the red rocks, through washes, across valleys, this hike traveled up a relatively narrow canyon filled with trees.  The red rock towered above us. When we arrived at the trail head we were met by this: 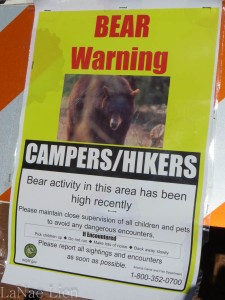 Insert nervous laughter here.  The husband?  Not the least bit concerned.  There was some discussion about if we should proceed with the hike.  I reluctantly agreed.  Heightened paranoia.  Particularly when I became aware that we were truly in a canyon.  I was the noisiest I’ve ever been on a hike.  I picked up a stick and tap-tap-tapped my way through rocks.  I babbled about nothing.  I think, at one point, the husband actually asked why I was so talkative.  I believe I stammered the word, “Bear.”

I am happy to report that no bear were seen that day (to my very obvious relief). 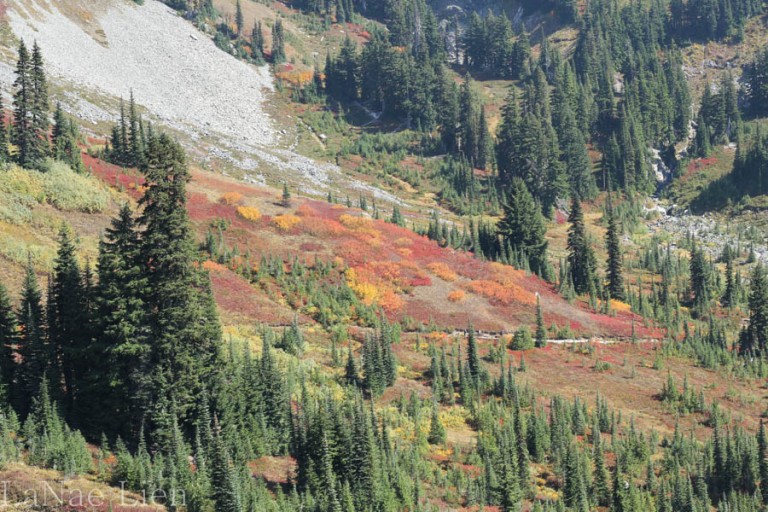 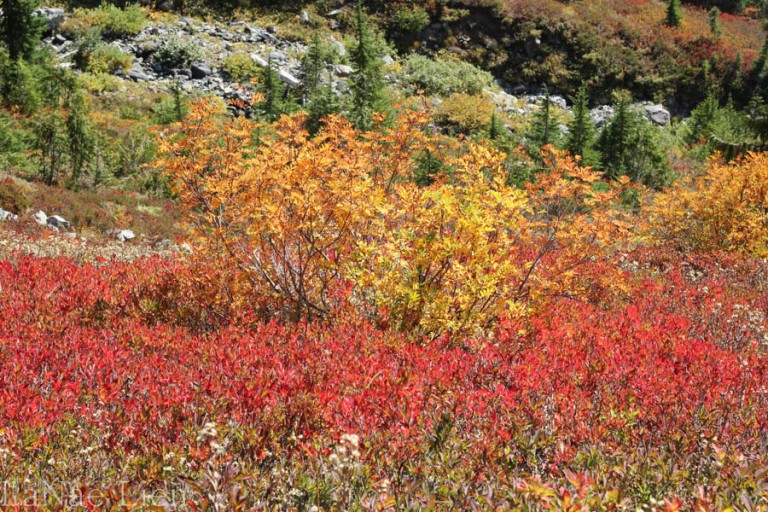 I tell you this because bears were on my mind when I set out for a hike at Mt. Rainier this last weekend.  The husband and I had long ago made reservations to stay overnight at Paradise Lodge at Mt. Rainier.  The goal?  To catch sunset and sunrise on the beautiful mountain.  And to hike. 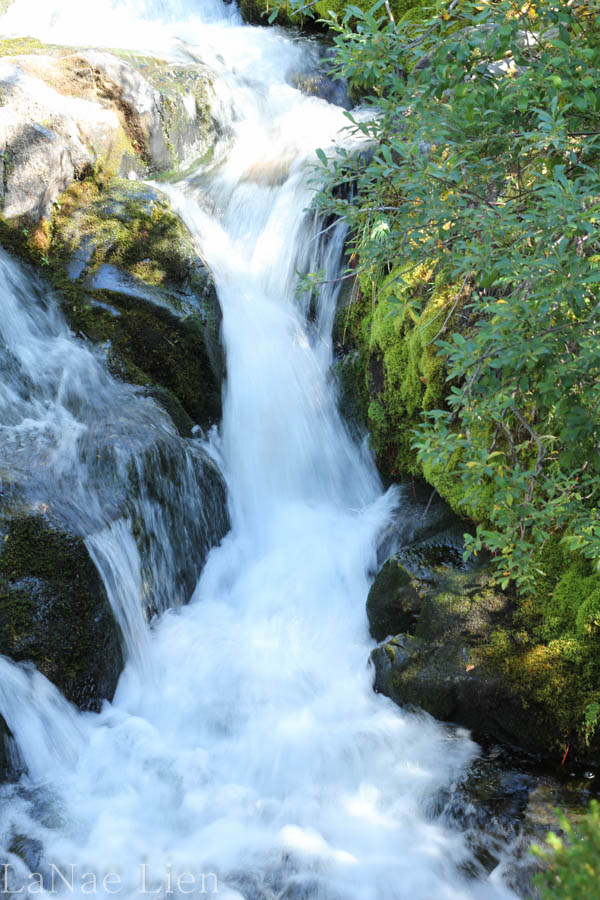 A wrench was thrown in the hiking when the husband developed back pain a couple of weeks ago.  When I wrote this entry a few days ago I said the following:

“It has not waned and has actually settled into his rib cage area.  A girlfriend and I did some Google searches and we, with all of our medical training, concluded that he has pleurisy.  He has a doctors appointment tomorrow (Tuesday).  I’ll let you know if Dr. LaNae was correct.”

Let’s fast forward to present.  We’re currently sitting in a hospital room.  Day two.  Dr. LaNae was incorrect.  The husband has pulmonary embolisms in both lungs.  My go-to phrase these days seems to be “scary shit”.  He had testing on Tuesday and was sent to the ER and then admitted.  He’s on blood thinner now and things are looking up.  We’re waiting for the Doctor this morning in expectation that he’ll be released today.  He may be on blood thinner for life or for 3-6 months, we don’t know, yet.  It’s been an unwelcome adventure that I’m not going to go in exhaustive detail about.  Let’s just sum it up by stating that he’s too young for this scary shit. 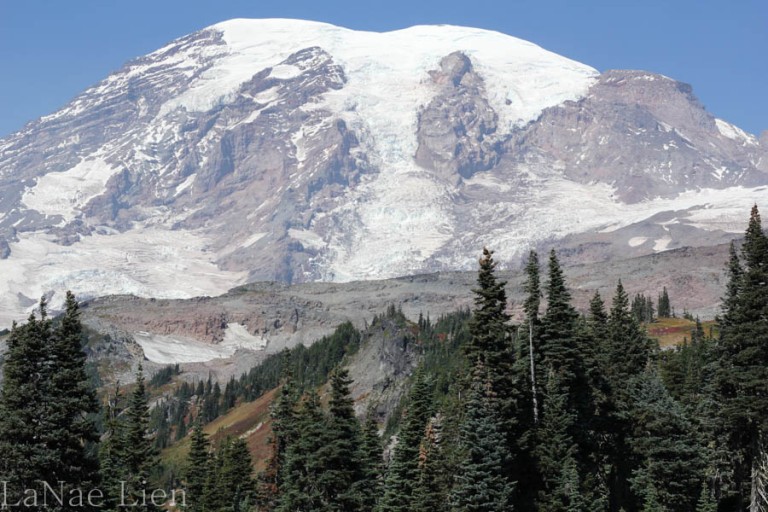 Anyways, it was pretty obvious last Saturday that the husband was not going to be able to hike.  Makes perfect sense now. But, it was a gorgeous (and I do mean gorgeous) fall day and he encouraged me to go.  Hike all by my lonesome?  I’ve not done that before.  I decided to do Skyline trail, which loops just above Paradise.  It’s a pretty easy 5.5 miles of very well-traveled trail, which gave me some comfort since I was solo.  Plus, I figured well-traveled meant less chance of being eaten by a bear.  You think I jest. 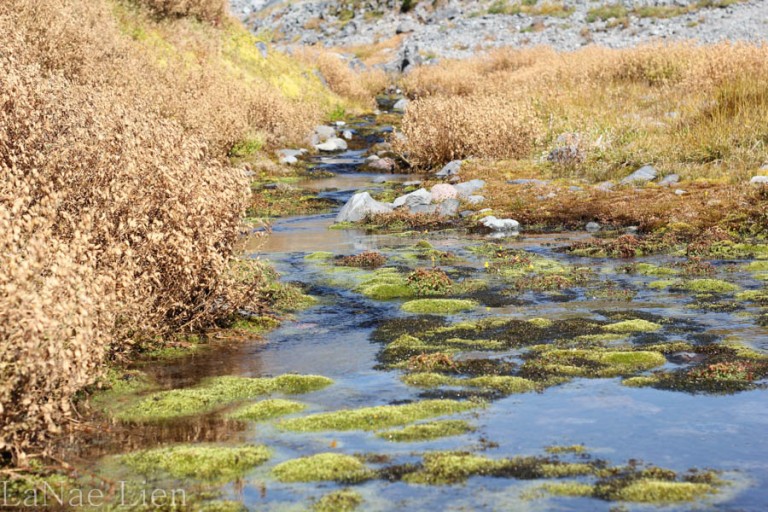 We arrived at Paradise around 11:30.  The lot was overflowing, but we had reserved parking as guests of the lodge. Whoo-hoo!  We checked our car in (our room wouldn’t be available until later) then pulled up a bench outside the lodge to have a bite of lunch.  It was just us….and a few hundred of our closest friends.  Sunny weekend in September?  The mountain was full.  C’mon, man!  The kids have gone back to school!  Isn’t everyone supposed to go home?  Actually, there were a lot of foreigners there (we heard more languages being spoken than we could identify). 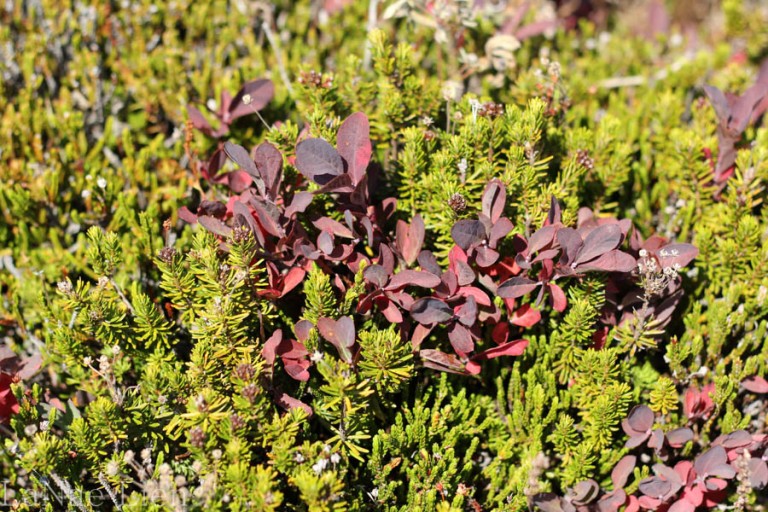 After lunch I got myself organized, strapped on my pack, kissed the husband (who looked rather sad) and headed up the hill.

There were two things I didn’t have to worry about:  hiking solo.  And bears.  Because it was just me…and a few hundred other people.  I can count on one hand the number of times that I had the trail to myself.  And none of those times lasted more than a couple of minutes.

Hiking on a well-traveled trail like Skyline is always a good opportunity to people watch.  You see everything from people with shiny new packs and hiking boots, carrying enough goods to summit Everest (or, at the very least, Rainier) to people with a  only 12 ounce bottle of water in their hand and flip flops on their feet.  I don’t know which scare me more.  That’s a lie.  The ones who are completely ill-prepared are the ones that worry me.  There was also a good mix of people like me on the trail (and quite a few solo hikers, too).  It was easy to pick them out.

There’s an interesting character trait of hikers that I appreciate:  they say, “Hello,” as they pass you.  They’re also willing to yield, but that’s a whole other story.  They’re also not stomping around off-trail destroying delicate meadows.

Anyways, back to the, “Hello.”  I started off saying, “Hello,” to everyone I passed.  That was a lot of, “Hellos.”  But, after a while I realized that a great many people weren’t returning my greeting.  And, after paying a bit of attention, I started to recognize those that were likely to offer or return a, “Hello,” and those who would not.  So, I offered selective greetings.  It was a bit of a game. 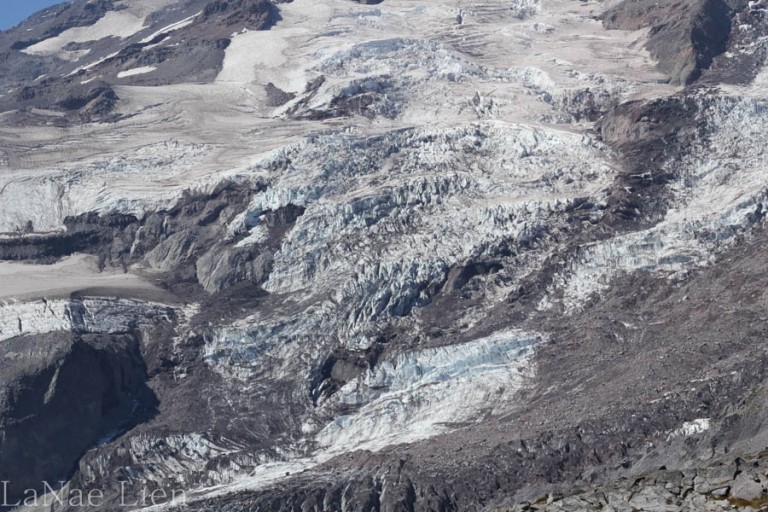 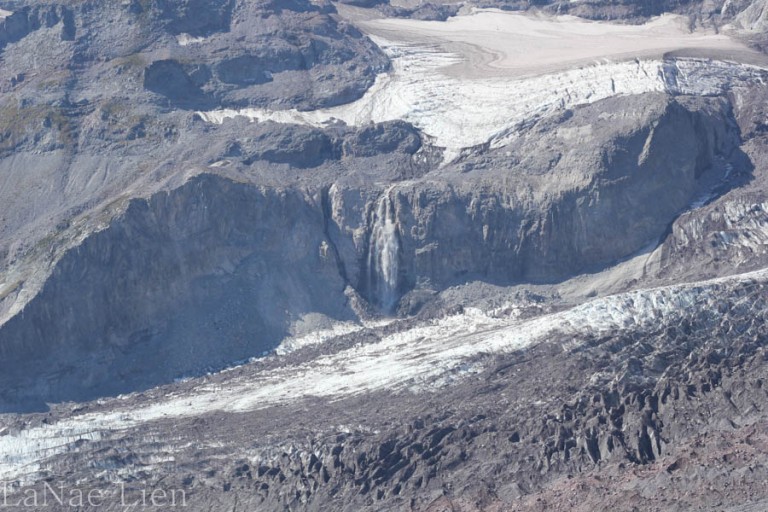 I took quite a while on the hike.  First of all, it was gorgeous.  Second of all, remember the part about there being a zillion people?  Thirdly, I was taking pictures.  Lots of pictures.  Too many pictures.  I looked like a photographic nerd.  I had my Canon 60d strapped across my chest and my Canon point-n-shoot in my pocket.  I only have a couple of lenses, as I’ve only had my camera for a few months.  I used the 50mm for pretty much the entire weekend, except for when I was zooming in on the marmots (I loves them).  Then I switched out to the 70-200.  However, with the 50mm I had a difficult time capturing the entire mountain.  I think I need a wide-angle lens.  Not that I know what number is associated with such a lens.  All in good time.

I returned to the lodge a little before 4 pm.  The husband had checked into our itty-bitty room (which I’ll tell you about later) and was resting.  I took a quick shower so I would no longer smell myself and we cracked open a large Rogue Hazelnut Brown.  The perfect beverage to wash the trail dust out of my throat. 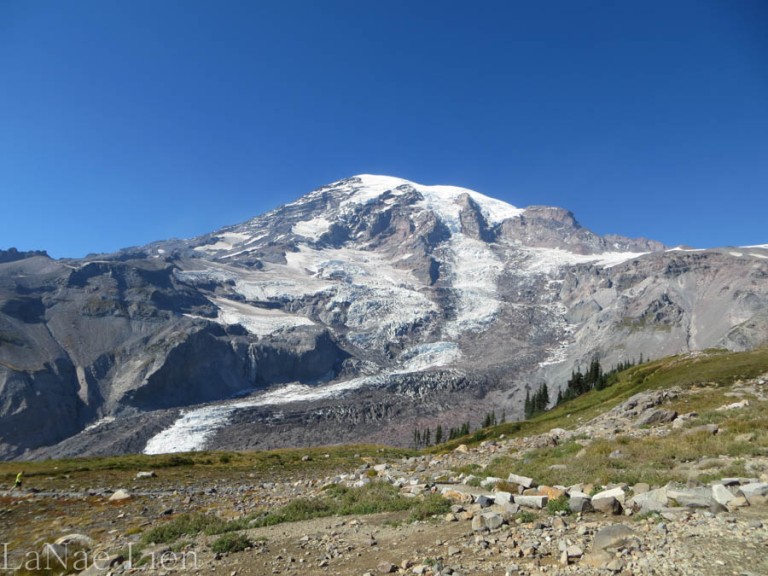 Still to share:  the lodge, the sunset, the sunrise.

13 thoughts on “A Hike on a Thoroughfare”