The New Year started out with a bang around here.  Literally.  As we gathered our things together in preparation for a hike I slipped and fell on the four stairs leading down into the family room.  Right on the tailbone. Happy New Year!  But, the show must go on, so I shook it off and we headed for the trail.  I discovered that it only hurt with every step I took. Particularly when skidding around on icy/snowy surfaces.  No big deal. This morning it only hurts if I stoop, twist, stand or sit.  No big deal.

Last week we unintentionally discovered snow while hiking.  This week it was deliberate.  I’ve long wanted to hike to Lena Lake, up the Hamma Hamma river in the Olympic National Forest.  But, I’ve been put off by the reports on WTA about this very popular and highly traveled trail.  Tales of hoards of people littering on the trail and noisily camping along the shores were off-putting to the husband and I.  We’re quiet hikers, are respectful about staying on designated trails and follow the tenet Leave No Trace.

Slight digression:  I do have to make a confession.

We try not to feed the wildlife.  Any wildlife…from chipmunk to bird. I know they love the Cheetos, but the Cheetos are not good for them. However, yesterday at the lake shore we were visited by Gray Jays, aka Camp Robbers.  We had a bag of almonds, dried cherries, white chocolate chips and sunflower seeds that I had tossed together for the hike.  They sucked me in and I found myself digging through the bag for the sunflower seeds.  I fed them no chocolate or sweetened dried fruit.  So, yes, I perpetuated their begging tendencies (it should be noted that the pictures below happened before they were fed).  My apologies to those who hiked in behind us. 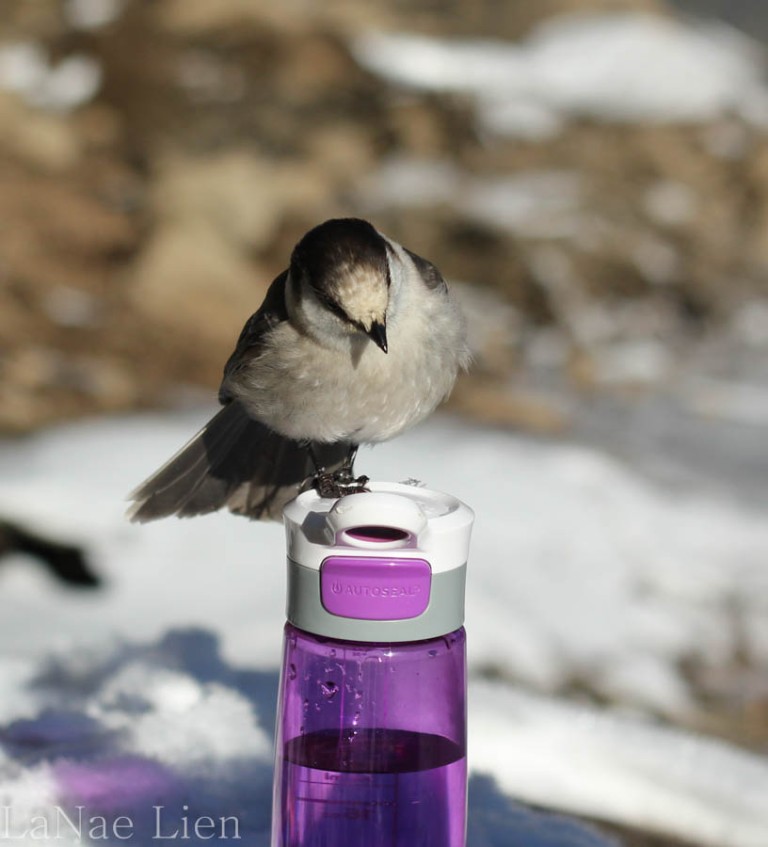 Anyways, back to what made us choose this hike.

I knew that we would never hike to Lena Lake in the summer.  It simply wasn’t on my radar.  But, when I was looking for something short and within an hour or so from home I happened upon recent trip reports that indicated that the number of hikers on this trail are radically fewer this time of year.  Makes sense.

The highest point of the hike is 2000 feet and we knew, based upon last weekend’s snowy experience at 1800 feet, that it was likely we’d be in snow for most of the hike.  However, trip reports assured us the trail had been well-traveled and was packed snow.  They forgot about the ice.

We headed out around 9 and arrived at the trailhead a little after 10.  We strapped ourselves into our packs and headed up the trail.  The first mile or so was patchy snow and ice.  Mostly ice.  The trail was well-traveled, but the result was icy-slick trail surfaces as that foot traffic slushed things up a bit and then  it freezing solid.

Because we don’t regularly hike in the snow we don’t have crampons. They would have been really helpful yesterday and I found myself experiencing crampon envy as we crossed paths with those who had them. 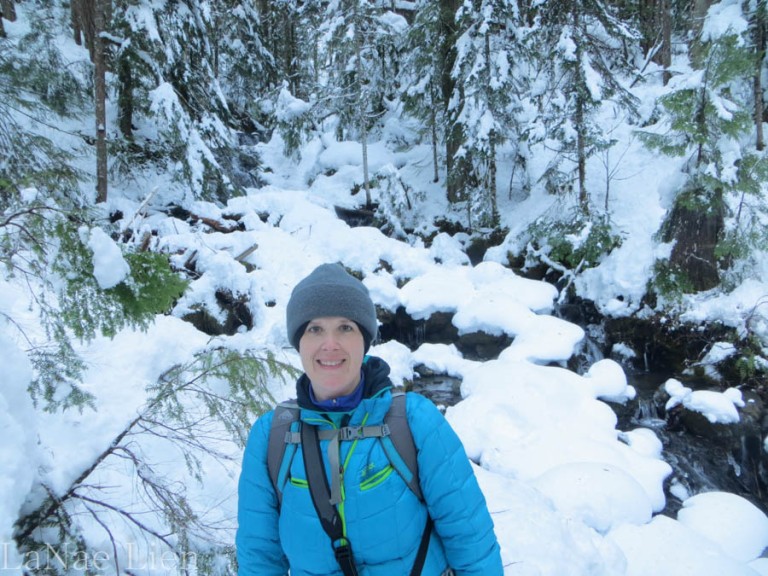 The patchy snow and ice gave way to deeper snow (still with the ice) the higher we climbed.  It was beautiful.  A winter wonderland.  We ran into other hikers, but it was sporadic enough to allow us to enjoy the silence of the snow.

And the sun?  Beautiful.  In fact, we couldn’t have had better weather.  The sky was so blue it looked fake.  It was one of those sparkly, perfect days that warms me to the idea of snow.  Though I told the husband that I really liked that we could enjoy snow for the day and then drive home to no snow.  Simply not a snow girl.

And the icicles?  Prolific.  I love icicles.  I took way too many pictures of icicles, but I’ll only share a couple.  Maybe a few. 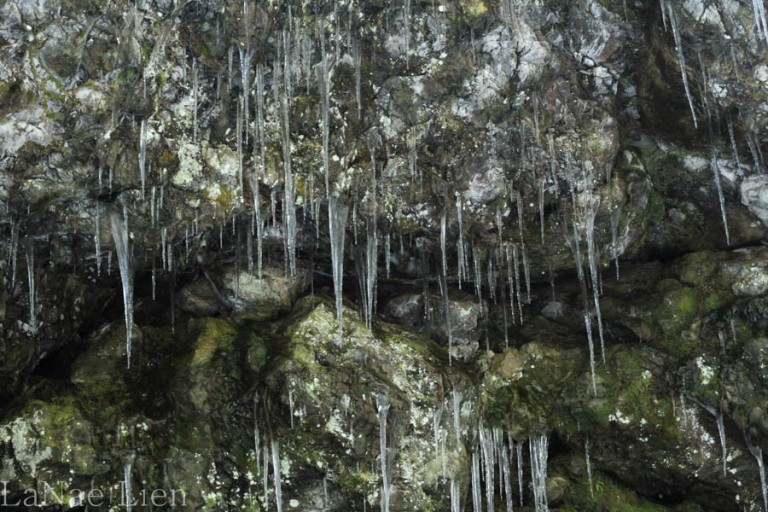 We arrived at a viewpoint above the lake and were rewarded with breathtaking views.  I shared pictures of the circles in this week’s photo challenge.

We paused on the bluff for a few minutes, then headed on down the trail in hopes that it would drop to the lake.  It did, and large rocks along the edge provided a great place to enjoy lunch and drink in the beauty.  Before lunch I crawled along the edge taking pictures of hoarfrost.  I love hoarfrost.  It’s just so…cool…looking. 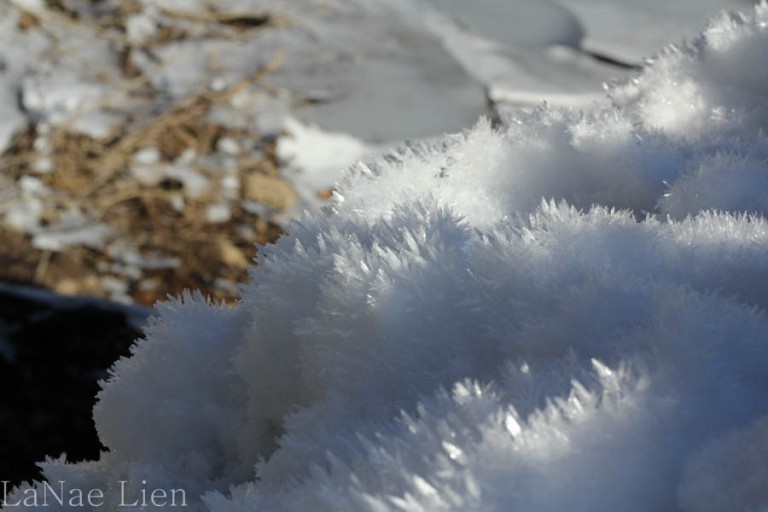 We sat at the edge of the lake eating our sandwiches and I pulled out our “hiking in the snow” treat:  a thermos of hot chocolate.  Never has hot chocolate tasted so good. 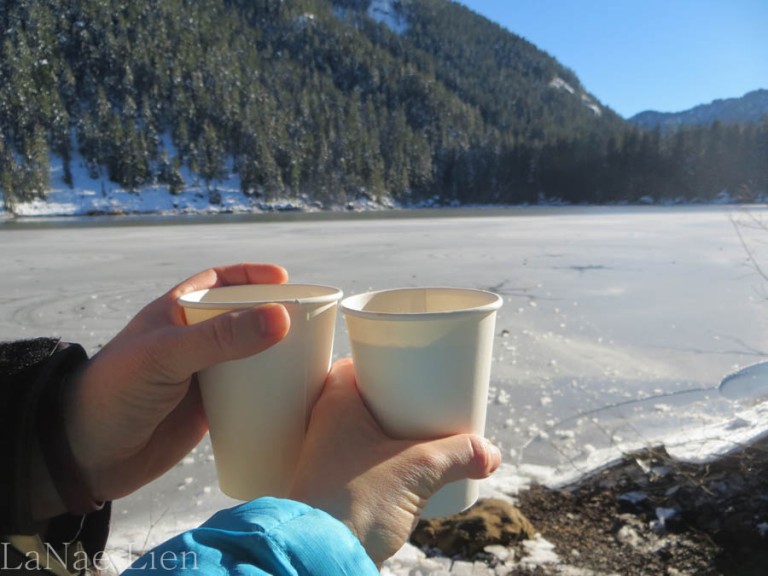 We lingered for a bit longer, then headed down the trail.  I swear it was slicker going back than coming up.  Which is likely as things had warmed up a snidge.  Trees were raining showers of snow at whim, resulting in some ducking and dodging.  But, all-in-all, a successful hike and a great way to start of the new year.

And, as we dropped back down to Hood Canal, we were rewarded with a view of the sun setting on Her Majesty: 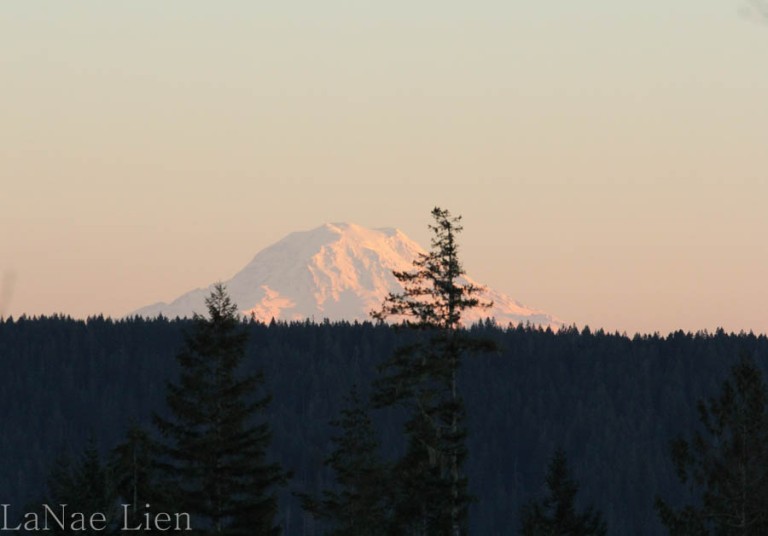 8 thoughts on “A Deliberately Snowy Hike”