Much of the day has looked something like this:  go to garage, apply a coat of brushed nickel paint to light fixtures, return to kitchen, pausing to dig CJ’s toy-of-choice (today it’s a crinkle ball) out from under the couch.  Repeat.  Are there a such thing as bumpers for couches?  There should be.

We’re having a couple of friends out for dinner tonight.  I intended to do a pretty easy meal:  Beecher’s mac-n-cheese, roasted brussel sprouts and butternut squash with dried cranberries and dijon vinaigrette and brown butter pumpkin cupcakes with caramel cream cheese frosting.  Turns out even simple can be complicated.

I failed to read the cupcake recipe before I started.  Rookie mistake.  First I had to brown the butter for the cupcakes. Browning butter takes time and patience.  One false step and you have too-brown butter.  Here it is “in process” on the left and the finished product on the right.  Nutty, buttery goodness.

I have to admit, I don’t bake much.  Don’t get me wrong, I know how to throw down a pie, a crisp, and a cobbler.  And, not to sound all braggy, but I’m known for my cheesecake.  I think the primary reason I don’t bake more is because it’s just the two of us.  And we like our sweets.  So, if I started churning cookies and pies and other goodies out of the kitchen on a weekly basis…well….we’d chunk up in a hurry.

As a result of not being a regular baker, there are some ingredients that I don’t use very often.  One of them?  Nutmeg. Not the stuff in the bottle.  The real deal.  Whole nutmeg.  In fact, I’ve never baked with whole nutmeg.  But, I’ve wanted to, so I bought some at Penzey’s in Seattle earlier this summer.  Today I pulled out my micro-planer and ran it across the nutmeg. It grated beautifully, smelled wonderful, and it turns out that the inside of a whole nutmeg has a really cool pattern.

Now I’m going to have to make hot winter boozy drinks that can be topped with freshly grated nutmeg (Tom and Jerry, anyone?  Eggnog?)

The brown butter slowed the process down because I had to let it cool before I could add it to the batter.  And, again, I was applying coats of paint, to my attention was divided.

I thought I had overcome all hurdles once the cupcakes were in the oven.  And then I read the frosting recipe.  I had to make a simple caramel.  Which isn’t a big deal, but, again, it takes time.

I was starting to question my dessert choice.  Until I tasted batter remnants from the mixing bowl.  The pumpkin was very mild, but the brown butter elevated this modest pumpkin cupcake to an entirely new level.  After making the frosting and tasting it I was completely sold. The combination of caramel and cream cheese icing is…divine.

I’ve not tasted the finished product, yet, so I’ll simply have to commit to updating this after I have done so.  I suspect it’s going to be swoon-worthy.  Especially with a scoop of french vanilla ice cream on the side.

I topped the cupcakes with pumpkin spiced pumpkin seeds from Trader Joe’s.  Think toffee covered pecans.  Something along those lines.  There are plenty of extra seeds and frosting should anyone feel compelled to add more at the table.

If you’re interested in the complete recipe I invite you to hop over to Tracey’s Culinary Adventures.

After finishing the cupcakes I turned my attention to what I had originally thought would be the show-stealer of the evening, as it usually is.  However, I think the cupcakes may give Beecher’s mac-n-cheese a run for its money tonight.  In our home we refer to this recipe as “grown up” mac-n-cheese.  The addition of garlic powder and ground chipotle brings this classic to a whole new level.  Well, that and the fact that the cheese is amazing.

I’m so thankful for amazing cheese.  I come from Oregon, land of Tillamook.  Some of the best cheese ever.  Don’t even try to argue with me on this.  You are wrong.

Washington, or, rather, Western Washington, has Beecher’s.  I don’t know that you can really compare Beecher’s to Tillamook because their production levels are so vastly different.  Beecher’s is better referred to as an “artisan” cheese.  You can read their story here.  And if I’m offering the history of Beecher’s then I’d better give you the option of checking out Tillamook too.

Beecher’s has a location at Pike’s Place Market and at Seatac airport.  When we flew to Sun Valley we had time for lunch before climbing on the plane, so I got to indulge in creamy, cheesy deliciousness.

For those of us in Western Washington Costco sells Beecher’s Flagship Cheddar in large chunks: 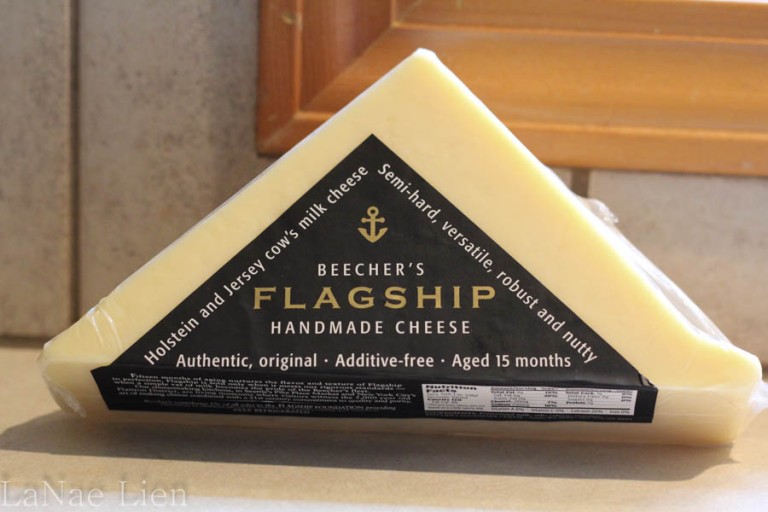 It is not inexpensive, but one large chunk makes a double batch of mac-n-cheese to share with our friends with enough cheese leftover for a single batch for us sometime down the road.

Actually, the friends we’re having over tonight are the ones who introduced us to homemade Beecher’s mac-n-cheese.  I will be forever grateful to them for that.

It’s not a complicated process, this dish.  Make a roux, add whole milk, cook until thickish, add cheese and spices, stir in penne, turn into a buttered dish.  But, as previously mentioned, do not underestimate the power of this simple dish.  Once you Beecher you will never go back.

The picture, unfortunately for you, is of the uncooked dish.  I will probably have consumed a couple of glasses of wine by the time the finished product comes out of the oven and that, coupled with the fact that I don’t want to delay dinner for our guests because I’m taking pictures, means this is your lot.  It’s still drool-worthy.

Here’s the recipe.  Again, I have doubled it for a main dish for four.  And I’m hoping there will be enough leftover for the husband and I to have tomorrow evening as a side.  Oh, and look, you can buy their cheese online.  If you don’t life in the great state of Washington I highly recommend that you do so.  So you, too, can experience the glory of this mac-n-cheese.

Oh, and I am making a vegetable dish, too.  The roasted brussel sprouts and butternut squash I referenced above.  I’ve not prepped it, yet, but here is the recipe.  I’ll leave you with a picture of the giant stalk of brussel sprouts I bought today.  It’s easily a couple of feet long and has some heft to it.  It could be wielded as a club if such a weapon was needed.