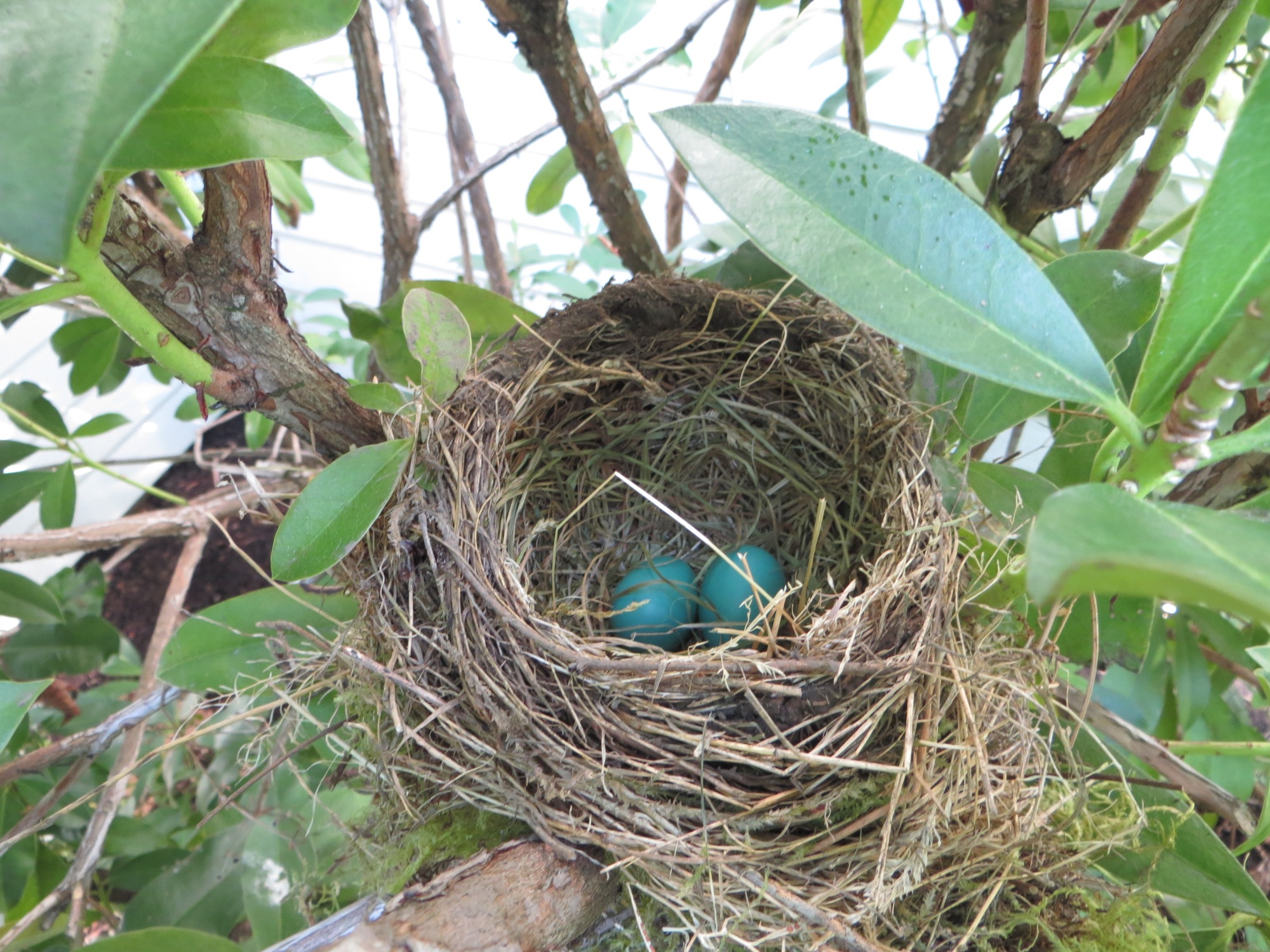 One of the things that I love about our property is the local wildlife.  Last weekend we laughed over a little bunny who hopped back and forth across the patio too many times to count.  I almost had a new pet.  I think the hummingbirds now recognize me as the “lady who fills the feeder” and they seem to follow me around the yard some days.  I love the twin spotted fawns that pass through with their mama.  Though I don’t appreciate that they taste everything (my tiger lilies are currently looking a bit gnawed on).

I was delighted to discover that a robin had again built a nest and laid eggs in a large rhododendron on the side of our house (there were a nest and babies in the same rhodie last summer).  A couple of weeks ago I was out watering plants in the back and when I went to turn on the water both robins went nuts.  I peeked in the rhodie and, sure enough, there was a nest.  It was a bit high, so I pulled out a short ladder (that really ticked them off) and looked inside.  Two Tiffany blue eggs! 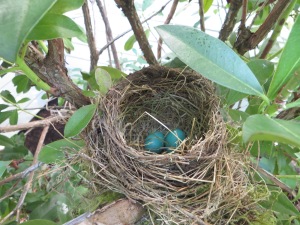 By the next day there were three eggs (apparently a robin will lay an egg a day, usually totaling 4). 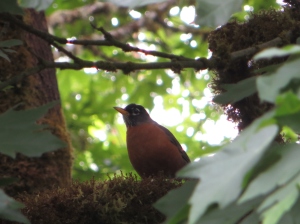 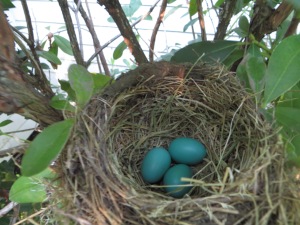 I started going out every evening to take pictures as I wanted to catch the entire event, from egg to flight.  I went out daily for 4 or 5 days until one evening when I approached the nest I knew something was wrong.  The male and female were no where to be seen.  I didn’t get scolded. With a sinking heart I pulled out the ladder, looked in the nest….empty.  I noticed a couple of shells hanging off the bottom of the nest.  I was heartbroken.  No babies.  I came inside and did a little research and discovered that it’s extraordinarily common for birds to raid each other’s nests (cannibalism at its best), eating both eggs and baby birds.  Well, that sucks. The nest remains empty.  I’m hopeful that she’ll try again a bit later in the summer. Though if I was a robin I wouldn’t want to return to the scene of the crime.

Over the last few weeks I’ve noticed that almost every time I go out on the front porch to water my plants I am greeted by a cute little black and brown bird, sometimes two of them.  They cheep-cheep-cheep at me and perch on the rain gutter or on the edge of the sidewalk or in the Japanese Maple.  I’ve thought they were flirting with me and cheep-cheep-cheep back at them.  I’ve looked forward to going out and watering so I could visit with the cute little black and brown birds.

Last night I went out to water and they were there, again.  I began watering a hanging basket and all of a sudden something tumbled to the ground (probably a good 7 foot drop).  It was a baby bird!!  The black and brown birds were in a frenzy and I realized that all of those evenings I thought they were flirting with me they were actually threatening me…away from their nest!  I immediately dropped the hose and started backing into the house saying, “I’m sorry, I’m sorry, I didn’t know you had babies…I’m so sorry!”  I felt sick.  I’m not sure where the nest is, but I think it must be in the upper rain gutter and the baby either fell out into the hanging basket or was trying to fly and only made it to the basket.  Then, when I watered it panicked and fell out.

The husband got home and I told him what had happened.  We peeked outside and the baby had righted itself and was tucked against the front steps.  It was breathing.  It wasn’t tiny-tiny…it did have feathers.  But it was still awfully small.  I felt really bad, so I mixed myself a cocktail.  We went out a couple more times during the evening and it was still there…and the parents were aggressively protecting baby.  This morning baby was gone.  The husband said, “Maybe something got it.”  I shot him a nasty look.  Not helpful.

The parents are still out there, though not as close and in-your-face as they were last night.  I’m hopeful that means the baby got back to the nest.  Of course, that baby may be toast but there are others still in the nest.  I am a horrible person. A possible baby bird killer. 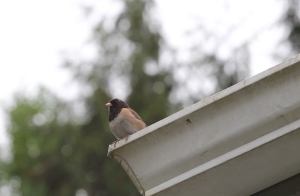 Bad time to be a bird at The Homestead.  Anyone know what kind of birds they are?