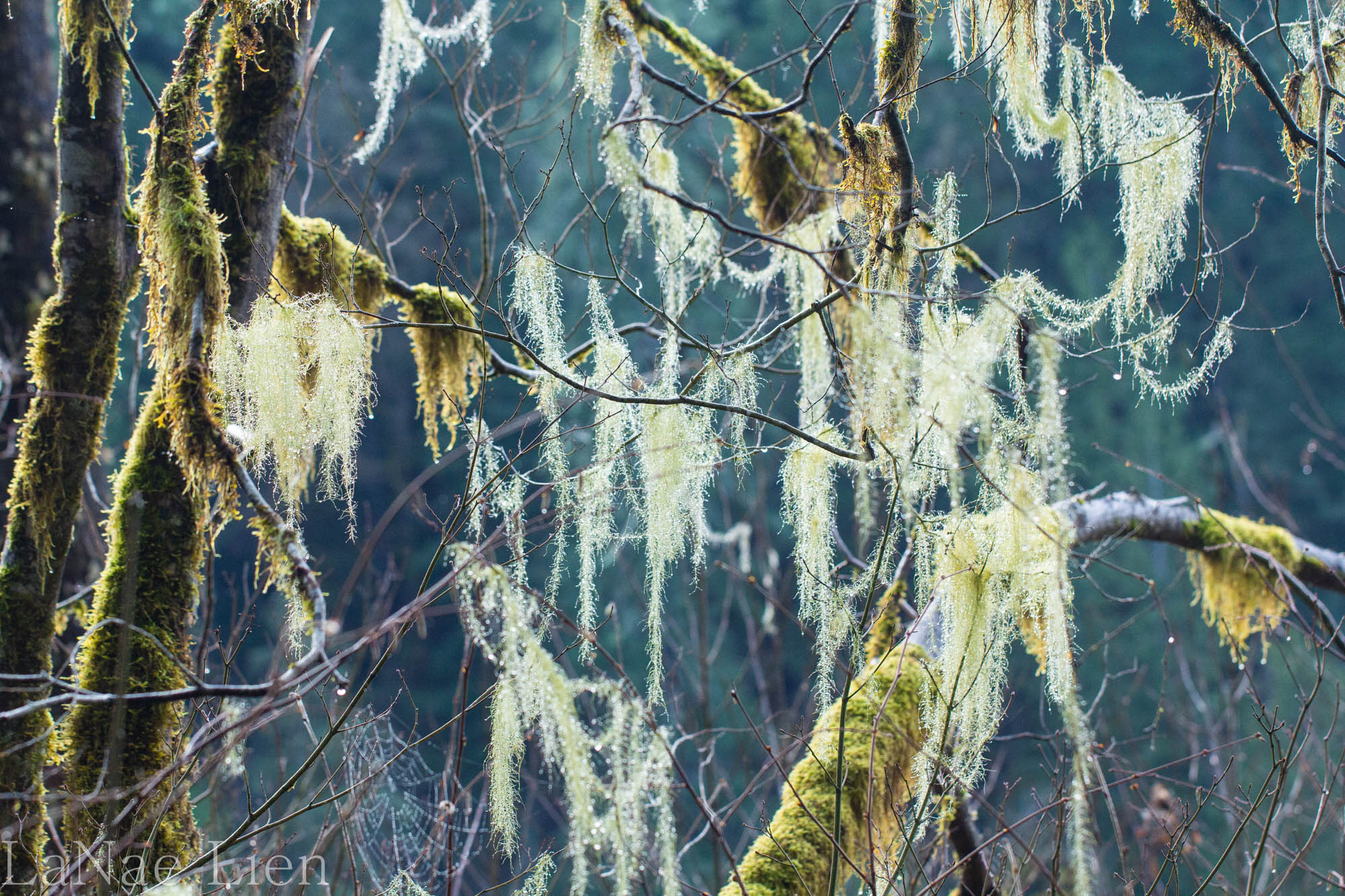 It’s become a tradition to hike on New Year’s Day.  This year the husband and I mixed things up and went on NYE, instead.  Yes, we are that wild and crazy.

We tend to stick to the lowlands in the winter.  Most of our favorite trails are covered in snow, so that’s a deterrent (from my perspective).  Also, it gets light late and dark early, which has to be taken into consideration.

The Lower South Fork Skokomish River trail is a nice winter leg stretcher.  It has very little gain (approximately 1000 feet) and most of the trail meanders within hearing distance of the Skokomish River.  There are sections where the river can be seen, and our turn-around-point is usually Camp Comfort, a hike-in camp that was wiped out by a big flood years ago. 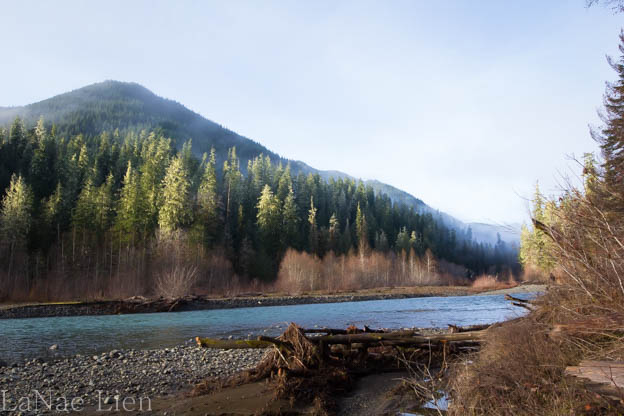 We didn’t bust our butts getting out of town on Sunday morning.  It wasn’t a race.  We reached the trailhead shortly after 9 and were on the trail by 9:30.  There was only one other car in the parking area.  Perfect. 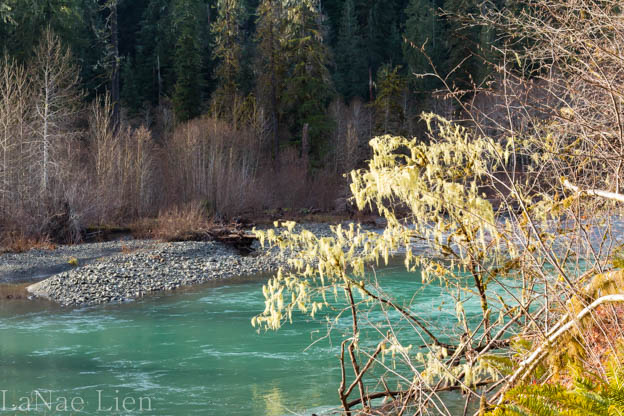 The morning was brisk and we started in some fog, but sunlight tantalized us ahead.  I was pretty certain that by the time we climbed the ridge and dropped to the river in the valley below that it would have burned off.  After all, most of our drive had been in the blazing sun.  But, the sun was a bit elusive.  We had a decent amount, but it didn’t work itself into the nooks and crannies of the valley as I had hoped. 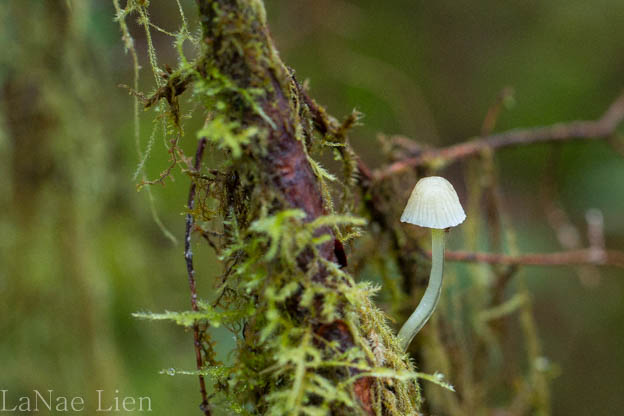 The second is a big area of wash-out with lots of erosion that changes annually.  Someone had put a couple of small logs (sticks) and a large hunk of bark across one section of the stream and we wobbled our way across.  We drew closer to the river after that, and entered…well…it was kind of like one large, swampy mud puddle that you couldn’t go around.  We again tapped into our mad-crazy balancing skills and made our way through. 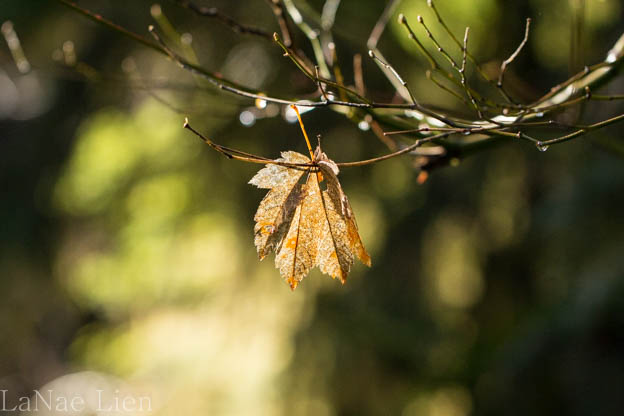 Along the way we drank in the sights.  The moss is just magical along this trail.  It drips off of trees like beaded door curtains.  It coats their bark like a luxurious gown.  It’s a million shades and textures of green.  The husband remarked that there’s something about the green in the Pacific Northwest in the winter.  And he is right.  In the summer things dry out (I know, there are those of you who think it never dries out around here) and the green is washed out.  But, in the winter our forests are fed by copious amounts of rain and they glisten in a dazzling green.

We came to another stream crossing, one that’s wider than others, but usually relatively shallow and easy to cross.  Not so this year.  There were no rocks large enough to hop across.  A cluster of trees that had fallen across it looked like a slip-and-crack-your-keister (and get wet) waiting to happen.  We wandered upstream…no go.  We stopped to discuss the situation.

We were less than a mile from Camp Comfort…probably within a half mile.  But, we had agreed that we would stop for lunch at 11:30 and turn around afterwards because of pending NYE dinner reservations.  We considered taking off boots and socks and wading, but that didn’t sound all that fun since we only have 20 minutes of hike-time left before 11:30.

We decided to follow the stream down to where it emptied into the river and have lunch there, leaving Camp Comfort for another time.  A bit easier said than done (swampy), but we eventually made our way to a bank above a tributary.  Good enough.  The husband, whose been dealing with a tweaky back, chose to pull up a wet log while I concluded that it was a standing/squatting lunch. 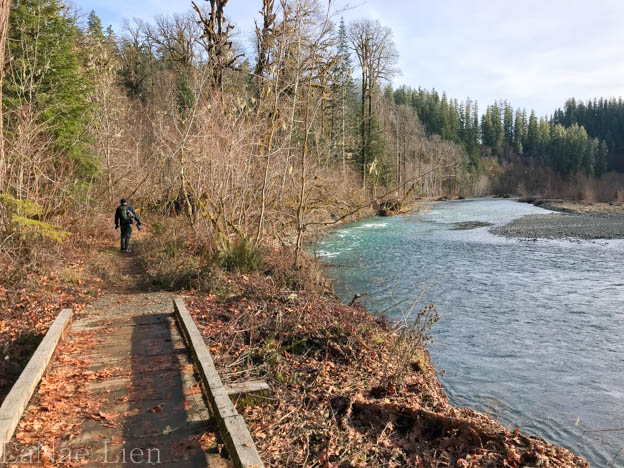 The husband pulled out sandwiches while I poured our trail warmer.  Hot cocoa.  With a little whiskey.  Happy New Year’s Eve to us.  We enjoyed our lunch, watching the river, staring at the mossy trees surrounding us.  After packing up, we paused for a selfie, then headed back up the trail. 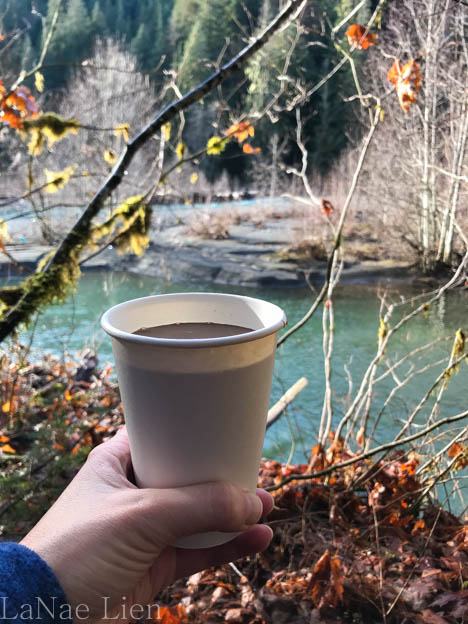 The trip back took a bit more time than the one out.  I had switched from my landscape lens to the macro, which slows me down a bit.  But, we weren’t in any huge hurry.  The trail was gorgeous, the company good, the temperature perfect.

With eight miles under our belts for our last hike of 2017, we arrived back at the truck.  We chucked packs in the back, pulled off boots and settled in for the drive home.  A good time was had by all. 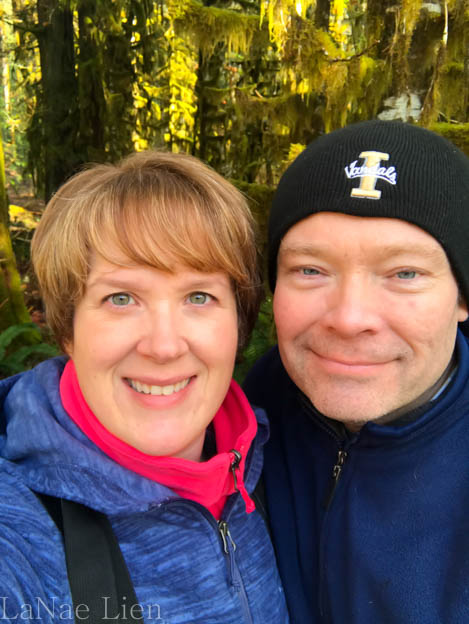 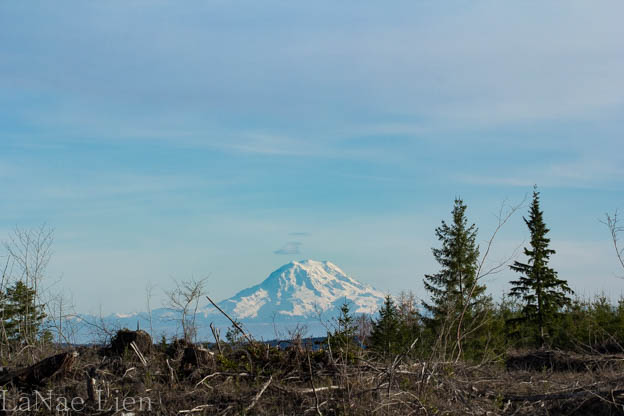