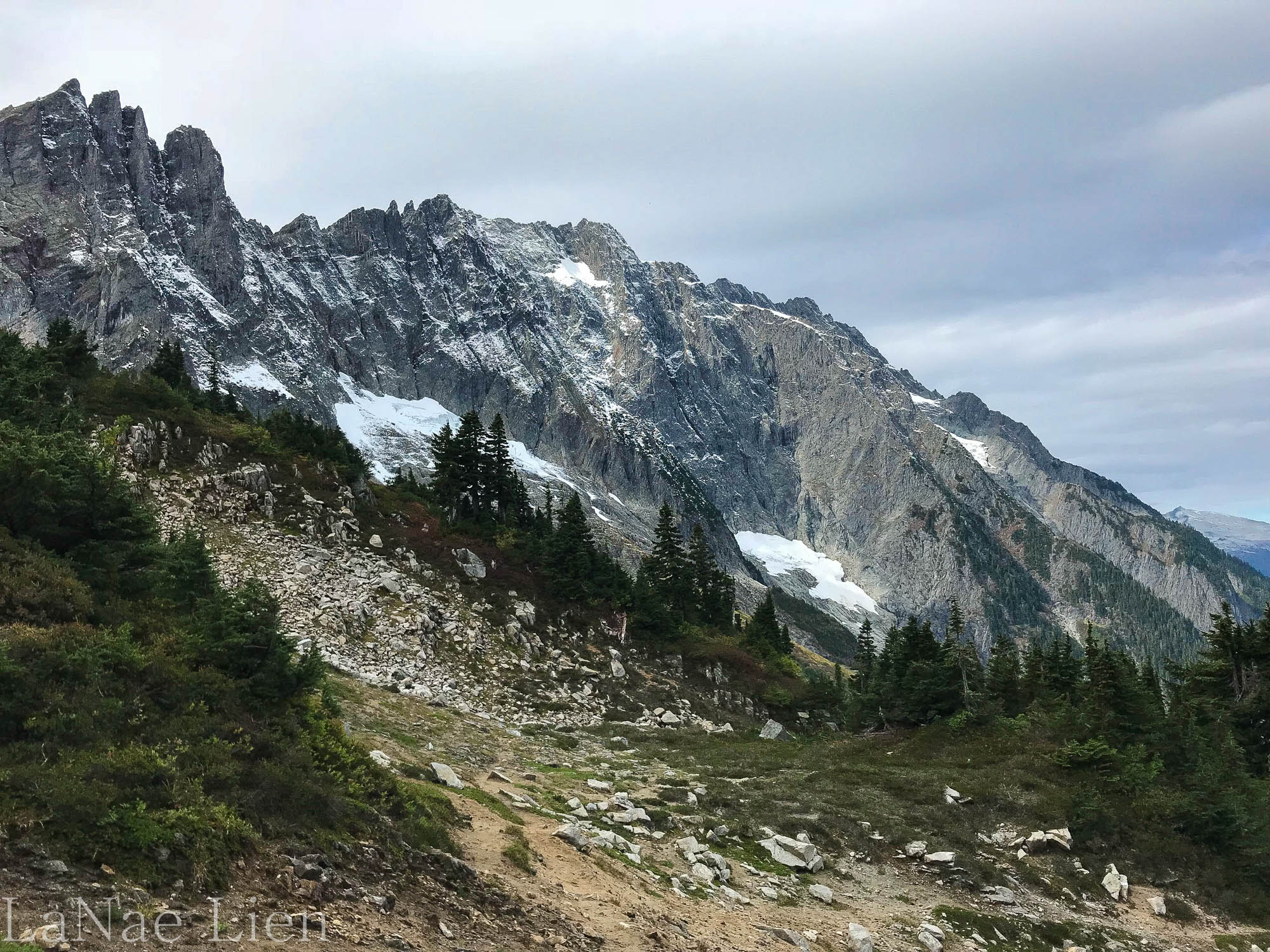 We woke up relatively early our first full day of vacation, eager to get out on the trail.  I had originally identified Heather-Maple Pass loop as our hike-of-the-day, but a conversation with the ranger at the North Cascades Visitor Center in Newhalem led us on a different path.

If we had hiked Heather-Maple Pass we would have driven approximately 50 miles on Hwy 2, terrain that we would be traveling the very next day on our day to Winthrop.  We decided that we preferred to see different territory each day, so selected to head out Cascade River Road from Marblemount to Cascade Pass.

You can actually start at Cascade Pass and hike all the way to Stehekin on the shores of Lake Chelan.  But we weren’t up for 46 miles roundtrip.  Imagine that.  In fact, we elected to not even hike up Sahale arm, which would have added about 5 miles to our hike and a pretty significant gain in elevation.  We wanted to gape, to lollygag, to drink it all in.  Thus, we elected only to hike to the pass, a little over 7 miles round-trip.

We arrived at the trailhead around 8:30 after bumping our way up a gravel road that we judged not too atrocious.  There is a gravel road up on the Carbonado side of Mount Rainier that we use as our judge for all other gravel roads.  It’s a beast.  Huge potholes, teeth-jarring washboards.  It’s a peach.  We agreed that the road to the Cascade Pass trailhead was not bad.  Though we discovered, upon our return to our motel, that we sacrificed a hubcap to the gravel road gods.  But, we blame that on the Les Schwab guy who put new tires on the car the weekend before more than we blame the gravel road.

There were already quite a few cars in the lot when we arrived, not surprising since this is one of the most popular hikes in the park.  My jaw dropped the moment we stepped out of the car.  Above us towered Johannesburg Mountain, more than 4400 feet above us.

The North Cascades have been referred to, appropriately so, as the American Alps.  They are, in a word, craggy.  They contain some of the steepest peaks in the contiguous US, rising between 4000 and 6000 feet above their bases.  The tallest mountain in the park is Goode Mountain at 9220 feet.  Let’s give you a little context:  Mount Rainier stands at 14,411 feet and Mount Hood at 11,250 feet.  This random mountain, deep in the recesses of the North Cascades, is only 2030 feet shorter than Mount Hood.  You’ve likely heard of Mount Hood…ever hear of Goode Mountain?  Craggy.

And, there are two other mountains within the range that also pass the 9000 foot mark, Buckner Mountain and Black Peak.  I won’t bother to name the ones that “only” stand between 8 and 9000 feet, lest I make your eyes cross.  Let’s just say that the North Cascades are an impressive range.  It was love at first sight.

With tall mountains come glaciers (300 or so of them…the most in any US park outside of Alaska), which we could hear occasionally crack and groan as we made our way up the trail.  The trail started in trees.  We could occasionally see Johannesburg peeking through, but for the most part it was forest.  And switchbacks.  The most gentle switchbacks we’ve ever been one.  According to those who have counted, there are 30-some of them.  The exact number seems to be elusive.  Probably because they’re looooong, leisurely switchbacks.  It’s easy to get distracted and lose count.  We didn’t even try.

We at last broke out of the trees and the mountains grew larger around us.  I swear.  They got bigger.  We crossed a long rockfield, stopping to watch and listen to the pika call to each other.  No marmot, unfortunately.  The wind began to pick up as we made our final approach to the pass, causing our eyes to tear and our feet to move a bit faster.

The viewpoint at the pass was a nice, flat clear area with a scattering of rocks that had “picnic rock” written all over them.  Unfortunately, it was cluttered by a bunch of people.  Sigh.  We grabbed a rock and began digging out lunch.  Luckily, most of the people moved on, leaving us, two rangers and about four others.  We listened to them talk (rangers are always full of good information and stories), while dodging the “corpulent” chipmunks that call this area home.  Fed by too many people who don’t know better (or don’t care) they are definitely a chubby bunch, and are bold little beggars. 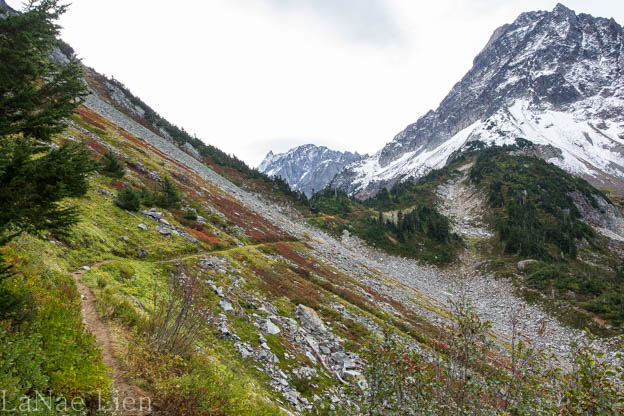 We munched our sandwiches, staring out over the gorgeous mountains before us.  It was breathtaking.  A co-worker told me that the North Cascades are one of his favorite places.  I nodded.  I have lots of favorite places.  Too many places in Mount Rainier and Mount St. Helens to count.  But, I can understand his passion for the North Cascades.  The area is completely different from any other mountain area in the great state of Washington.  So rugged.  So majestic.  It’s now one of my favorite places, too.

We also learned something as we sat visiting with a ranger.  Do you know that mountain goats are always horribly deficient in salt?  And that, as a result, some view us as human salt licks?  If you’re sweaty you’re attractive.  If you’re covered in dried sweat, yum yum.  And if you’re peeing?  Well, just be aware of your surroundings.  🙂

After winding our way back down the trail we pulled up a picnic table and enjoyed a cold beverage under the looming presence of Johannesburg.  We finally packed it in and headed back to town, pulling into a completely empty lot at the old Totem Trail Inn.  Odd.  Sunday in September.  Ours was the only car in the lot.  We got out of the car and noticed that the door of the room next to ours was ajar and the TV blaring.  I went on inside, but soon heard the husband’s voice and a female voice.  He came into the room a few minutes later, grinning.  The female owner had been in the room next door.  He suspected she had been laying on the bed watching TV. She had explained that it was her birthday the next day and that she and her husband were shutting the hotel down for the week.  We were the last guests.  The only ones staying there that night.  He also reported that it appeared, based upon the slurred words, that the party had started a little early.

It was a little creepy at the Totem Trail that night.  Dark.  Quiet.  A little Bates Motel feeling.  An experience, for sure.  But, our bellies full of Korean food from a little restaurant in Marblemount (very good Korean food) and a very tall glass of wine at the same restaurant (they filled them to the brim), we were not bothered.  We slept well, visions of soaring mountains dancing through our heads, looking forward to seeing more the next day.

One thought on “Cascade Pass”