The husband made me promise not to tell you where we hiked last Saturday.  It was that delicious.  Of course, he said it was a continuation of the promise I made last year.  I looked back (see that post here) and, well, I was attempting to be cagey by not telling you where we were, but I told you the name of the hike.  Not so secret.  Plus, there were enough cars at the trailhead to indicate that this is far from a well-kept secret hike.  We weren’t stumbling over people, which was nice, but it’s interesting that when we went there last summer we were almost the only ones on the trail.  Perhaps because we were later in the summer and the meadow was dry and brown.  This summer it was lush and covered with tiny yellow wildflowers.

We headed out of town around 7:30 on Saturday morning, arriving at the trailhead around 9:20.  Within seconds of stepping out of the truck the mosquitoes were swarming.  “Perhaps they’re just here?” I suggested hopefully to the husband.  He snorted disbelievingly.  The unfortunate truth is that if there are skeeters at the beginning of the hike, the little bloodsuckers are likely to be present the entire hike.  The husband was (wisely) dressed in long pants and long shirt.  Because it was a gorgeous day I refused to zip my pant legs back on my shorts and was in a t-shirt.  I doused myself with bug spray and announced myself ready to hit the trail. 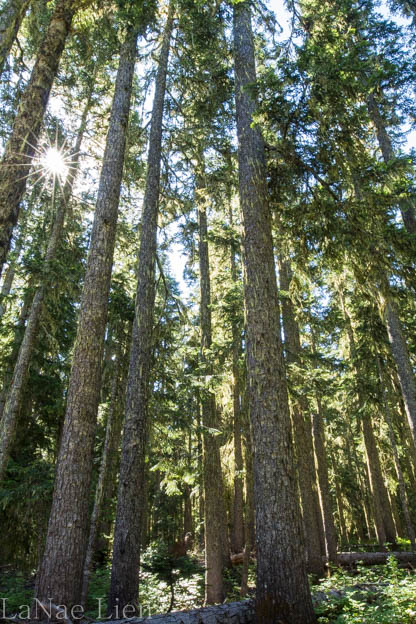 Here’s the problem with that:  what happens when you hike?  You sweat.  Which makes the bug spray slide off your body.  And the seething horde just waits for a patch of skin to be vulnerable.  As I write this I am still itching.  I did put a long-sleeved shirt on for our trek back down the trail, but by that time it was really too late.  For the last couple of days I’ve been carrying around a can of spray-on Calamine.  Damn skeeters.

Despite the bugs, it was a gorgeous morning.  The sun was out, the birds were chirping, our feet were light on the trail.  Less than two miles out we arrived at the shores of Lake Eleanor.  While there are camp spots along the lake, it was empty that morning, allowing us to drink in the beauty of the green-blue lake, the blue sky, the reflection of the trees.  After a short pause (it seems like many of our pauses were rather short as the minute we stopped the skeeters would dive-bomb us) we continued on, beginning the climb to the first meadow. 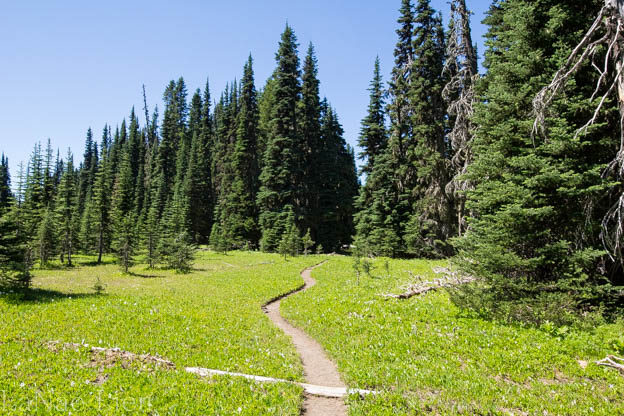 Many get to the first meadow and think it is the meadow and turn back.  It is a beautiful meadow.  It contains a small pond and there were large patches of lupine scattered throughout the greenness.  And, there is a beautiful glimpse of Mt. Rainier.  But, after you see the meadow it puts this pretty little one to shame.  We slogged through the back part of the meadow, which tends to be a bit boggy (read:  very boggy), dodging small frogs that were hopping wildly about our feet.  We returned to the forest and continued to climb, spying avalanche lily here and there, though most were already fading.  I held onto hope that there would still be some at higher elevations as I know that much of this trail was still covered in snow just a couple of weeks ago.

In relative short order we burst out of the trees into the beginning of Grand Park.  Our eyes goggled at the lush greenness and the decent amount of avalanche lily.  This first part of the meadow is dotted with groups of trees.  In their shade, the lilies were more persistent.  We moved further in, the mountain moving from hiding behind trees to standing proudly before us.  I glanced at my husband and asked, “Is it just me, or is that mountain bigger than last time we were here?”  He responded, “Sure looks bigger to me.”  There’s an obvious reason to that:  last year she had a cloud covering her top that never quite drifted away.  Oh, it would look like it was going to, but then she would pull it back.  Shy?  Coy?  Not this year.  This year there was not a cloud in the blue, blue sky and she stood out in stark, majestic contrast.  The trail rolled before us, a ribbon across the meadow.  And the flowers?  A carpet of tiny yellow wildflowers (I think they were sulphur flowers), interspersed with the occasional magenta paintbrush, clump of phlox and lupine. 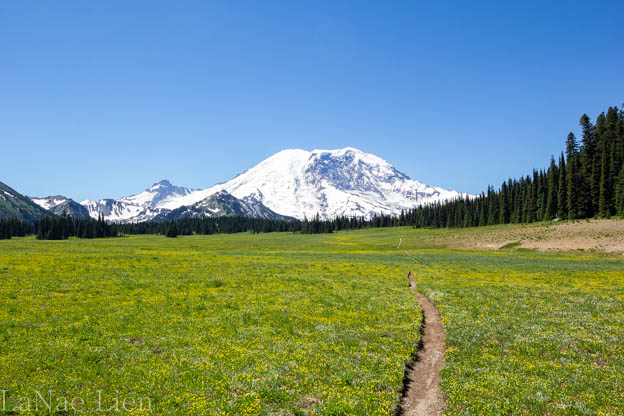 To understand just how vast this yellow-ness was you have to understand the expanse of Grand Park.  From beginning to end the meadow is about 2 miles long.  Yup.  You read that right.  Imagine that, filled with tiny yellow flowers.  Heavenly.

We walked a little over a mile in and elected to have lunch and turn around at the same spot as last year.  The only problem (such that it is) with Grand Park is that there are no Lunch Rocks.  Not even a Lunch Log.  And, since we’re very cognizant of the fragility of our National Parks (read:  stay on the trail, stupid), we do not tromp off trail in search of the “perfect” spot to eat. However, there is a wash in Grand Park that provides just enough of a dirt ledge on the edge of the trail to plunk ourselves on.  We pulled out our sandwiches and settled in to drink in the view.  And the cloud of flying demons descended upon us.  Damn skeeters.

Needless to say, lunch wasn’t quite as leisurely as we had hoped.  After a relatively short break we packed it all in and headed back down the trail, pausing here and there to look back at that gorgeous mountain.  After too many pauses in the meadow to shoot close-ups with my macro lens I finally tired of the incessant chain-saw whine in my ear and we picked up the pace.  We wound our way back to the truck, marveling at what we’d seen.  Indescribable.  Impossible to fully capture with a camera.  As it should be.

2 thoughts on “And Then There Was She”