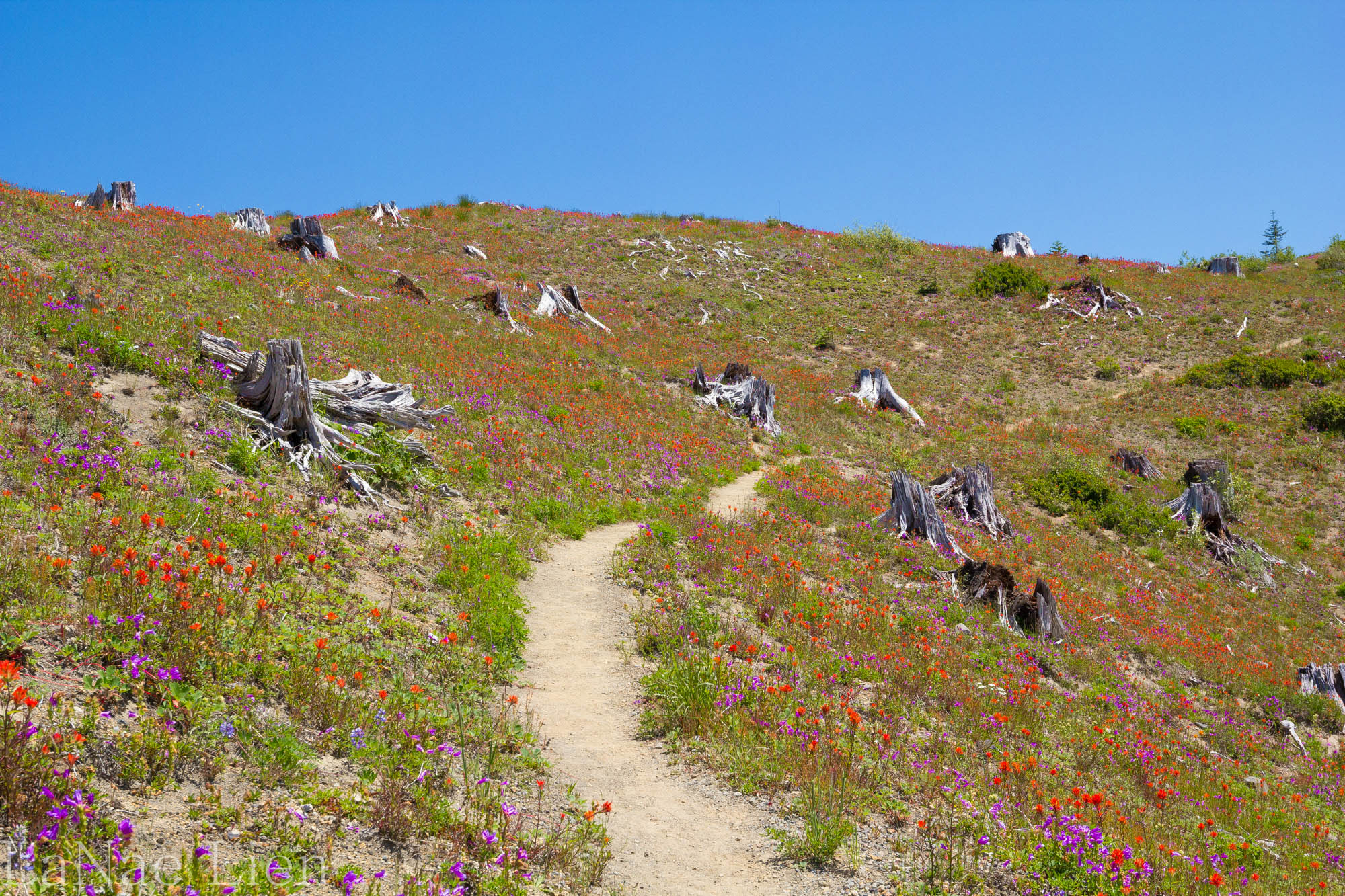 Hiking in the Pac NW has been a little challenging lately for those of us who are snow-adverse.  It’s fantastic that we had so much snow in the mountains this winter.  It also sucks that many of the trails that we would normally be getting into this time of year remain snow-covered.  I’m ready for the snow to recede and avalanche lily to blanket the countryside.

This last weekend, after reading many a trip report on the WTA website, we had an all-clear for Mount St. Helens and headed south.  Destination:  Boundary West Trail. 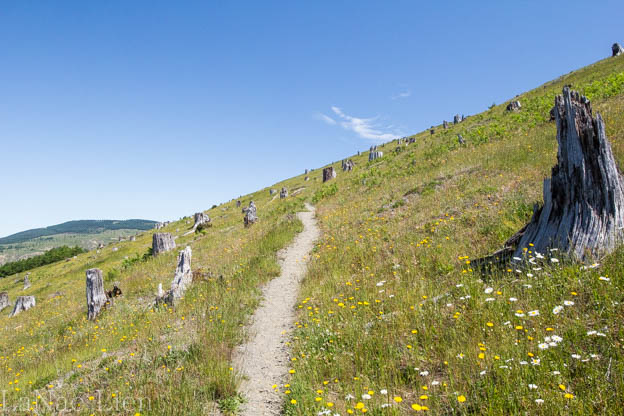 Boundary Trail winds all the heck over the Mount St. Helens area, which I find rather confusing.  It feels like there’s actually a half dozen separate trails all called the same thing.  Challenging.  We actually parked in the Hummocks Trail parking lot, just past Coldwater Lake.  ½ mile out on Hummocks we hit Boundary and headed up-hill.

The trail climbs pretty steadily out of the valley, headed towards Johnston Ridge.  It’s about 5 miles from the Hummocks trailhead to Johnston Ridge, with about a 2300 foot gain.  Enough to get the blood pumping without making me hate the trail. 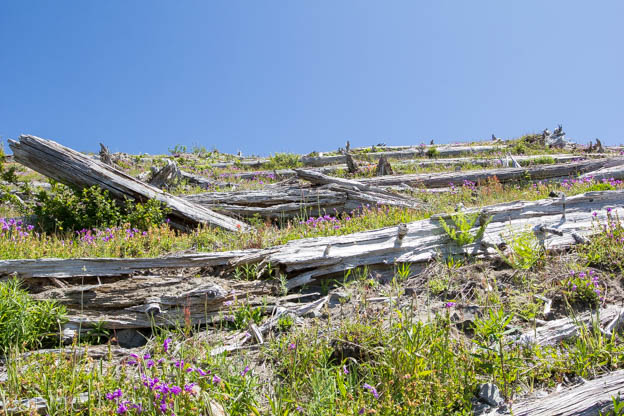 We hit the trail around 9:30 am after an hour and twenty minute drive to the trailhead.  There were few cars in the lot and it was promising to be a beautiful day.  We weren’t so sure about the weather as we drove down.  We hit mist that turned to rain around Toledo, WA.  Then, as we began to climb towards the mountain the fog engulfed the car.  Concerning.  However, by the time we hit the trail the sun was shining and the last tendrils of fog were dissipating from the hills and hummocks surrounding us. 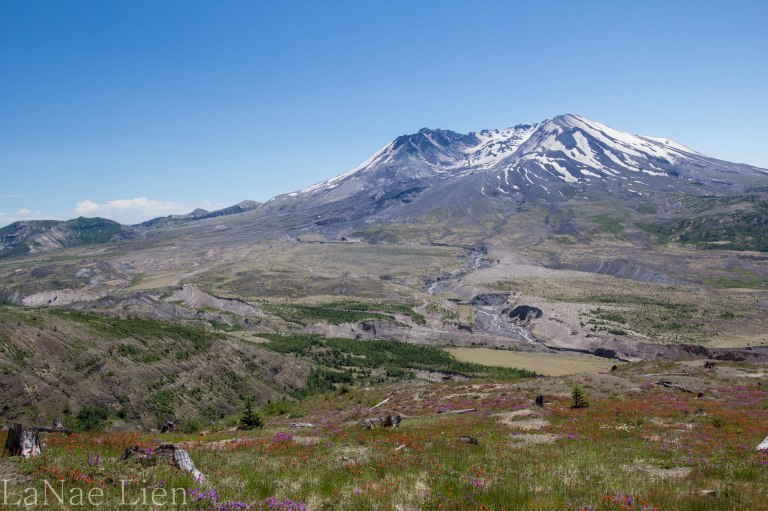 Mount St. Helens erupted in May of 1980.  In some ways, it is astounding to see how much of a wasteland still exists as a result that eruption.  Trails are often composed of volcanic rock, sometimes resembling course gravel, other times rocks 2-4 inches in diameter, shifting and sliding under your feet.  In the blast zone you can still see twisted stumps and fallen logs, remnants of the lush forest that once filled the valley.  Now weathered to a ghostly grey.  And, yet, there is life.  Small stands of alder are taking hold in some areas, as are other trees and various shrubs.  The sound of chirping birds followed us on our entire hike.  And, this time of year, many of those areas scraped clean are covered in blankets of wildflowers.  Blankets.  Blankets and blankets. 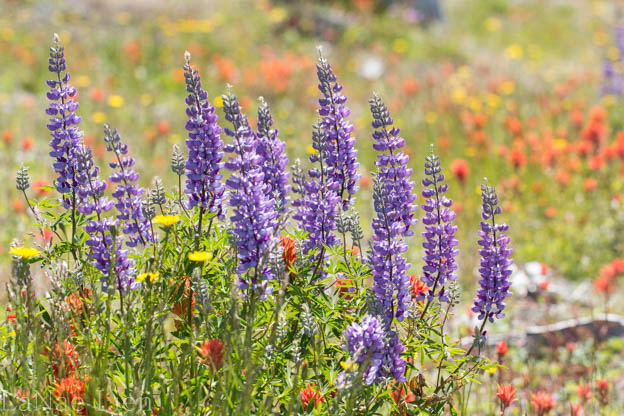 Mount St. Helens is a place of both celebration and mourning.  I love her for who she is today because I never knew her as she was 37 years ago.  And I have watched her slow recovery with every year, every hike.  I was seven years old when she erupted.  Living on the Oregon coast, all I really remember is the skiff of ashy soot that covered the picnic table on our back patio.  However, I can understand those who still deeply mourn the loss of her “before.”  Those are the people who camped along her rivers, perhaps spent part of their childhood summers at camp on Spirit Lake.  To those people, who may remain reluctant to return to her, I would encourage to do just that.  She is still there.  She is much different.  But she is still exquisite in her own way. 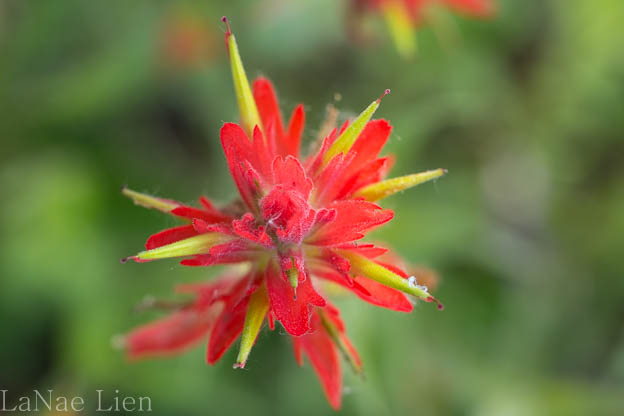 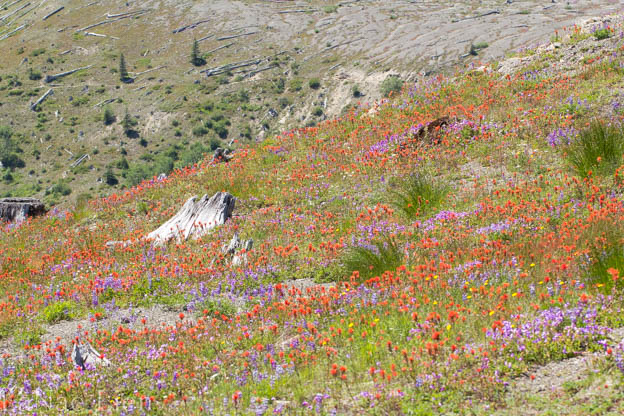 We’ve actually not hiked Boundary West before.  And, obviously, not many others make a habit of it.  The entire time we were on-trail I think we ran into a total of a dozen people.  On a ten mile round-trip hike.  Glorious.  Particularly since you have a perfect view of the mountain for almost the entire hike up, and a view of the valley on your way down.  Actually, it’s a really crappy hike.  You should avoid it at all costs.

What I found particularly cool was the different perspectives along the way.  The hike starts in the valley amongst the hummocks.  They towered above us.  And, in the distance, the mountain did the same.  As we climbed the ridgeline the hummocks came to eye level and then fell below us.  The mountain remained taller than us, but not as tall as before.  The weather warmed, the birds chirped and wildflowers dotted the landscape. 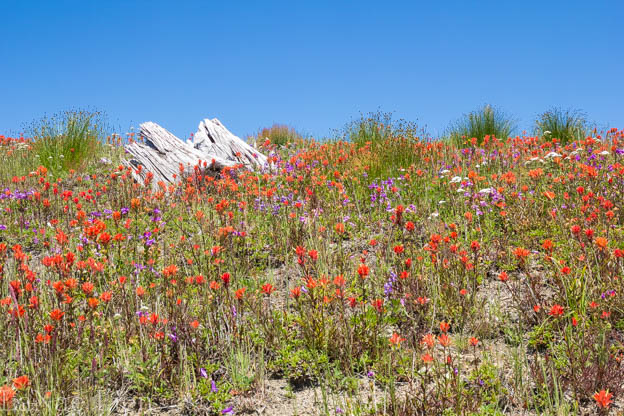 We hit our first blanket of wildflowers around the 2 mile mark (around about there).  Paintbrush, penstemon and lupine vied with each other to see who could put in the showiest display.  A fair number of dandelions stuck their heads into the mix to offer a pop of yellow.  I was in heaven.

About a mile out from Johnston Ridge Observatory we hit a second area blanketed by wildflowers that put the first area to shame.  Obviously, we had timed it right and were there during their peak.  I have never seen wildflowers like that at Mount St. Helens before.  Wildflowers, yes.  But these were wildflowers in steroids.  It was breathtaking, and impossible to truly capture with a camera in the harsh sunlight.  But, if I close my eyes and I can see them as they were.

It was odd dropping off the quiet trail and joining the masses trooping from the parking lot to the visitor’s center.  We bypassed the interior and settled ourselves on a bench in their small, outdoor amphitheater, where we caught the end of their Junior Ranger program.  Kids lined up to get their Junior Ranger certificate and badge and it took everything I had not to go stand in line. 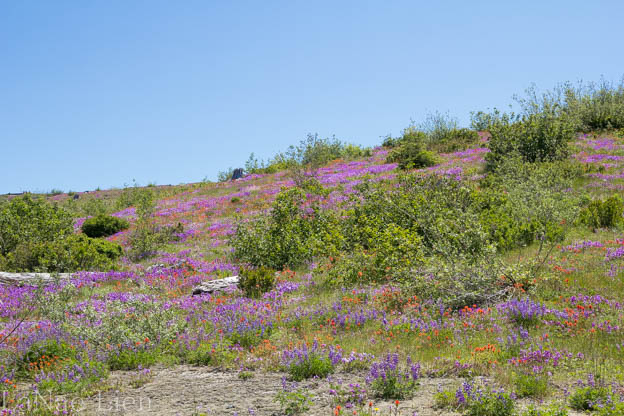 Lunch bench is a lot different than our typical lunch rock.  We were feeling pretty high class as we munched on our sandwiches and stared at the mountain before us.  After a nice rest we gathered our things and approached the visitor’s center, intending to refill our water bottles.  Meaning we had only packed enough for one-way.  The line to get in wound out the door.  Crap.  The husband lifted his few remaining ounces and announced, “I think I’m good…it’s all downhill.”  Unfortunately, I had sucked down the remainder of my water with lunch and was still feeling thirsty.  After a few minutes we realized that the restrooms sat just inside the main double doors and we were able to excuse ourselves past the masses to use the facilities and refill. 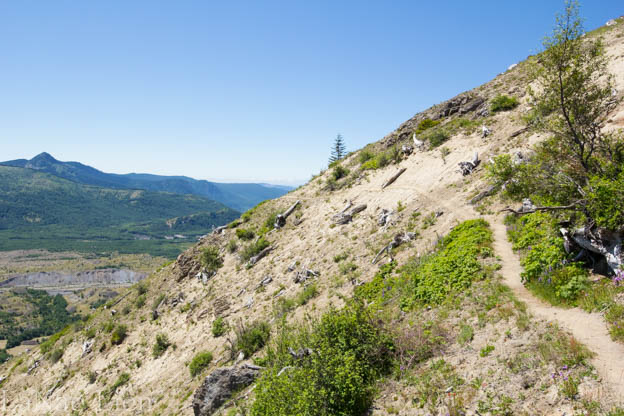 Refreshed and back on the trail, we slowly wound our way back down.  Things didn’t fall apart until about the 8 mile mark.  Remember the gimpy knee(s)?  It’s still gimpy.  But, this summer I’ve assumed a “screw the gimpy knee” approach and am hiking anyways.  It actually did pretty well until the last big drop into the valley, then it attempted to remind me who was boss.  I popped a few more ibuprofen and sped up, wanting to get off the trail.  The husband, on the other hand, slowed down.  He had told me that he had tweaked his back/hip a couple of weeks ago working in the lawn.  He failed to tell me, until we were on the trail, that more recently he also twisted an ankle.  On the same side.  He indicated feeling pain from mile zero to mile ten.  That’s a good time right there. 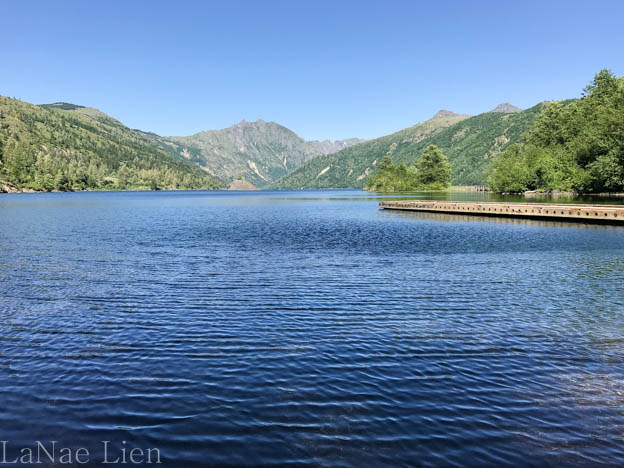 Both of us gave a sigh of relief when we finally got back to the car.  We stripped off our dusty boots and socks and groaned as we sat.  We drove across the way to Coldwater Lake and parked ourselves on a log in the shade next to the lake and enjoyed a frosty beverage.  After quenching our thirst we packed it in for the day and headed home.  Achy, tired, sunburned…with visions of wildflowers dancing through our heads.

3 thoughts on “Gobs of Wildflowers”