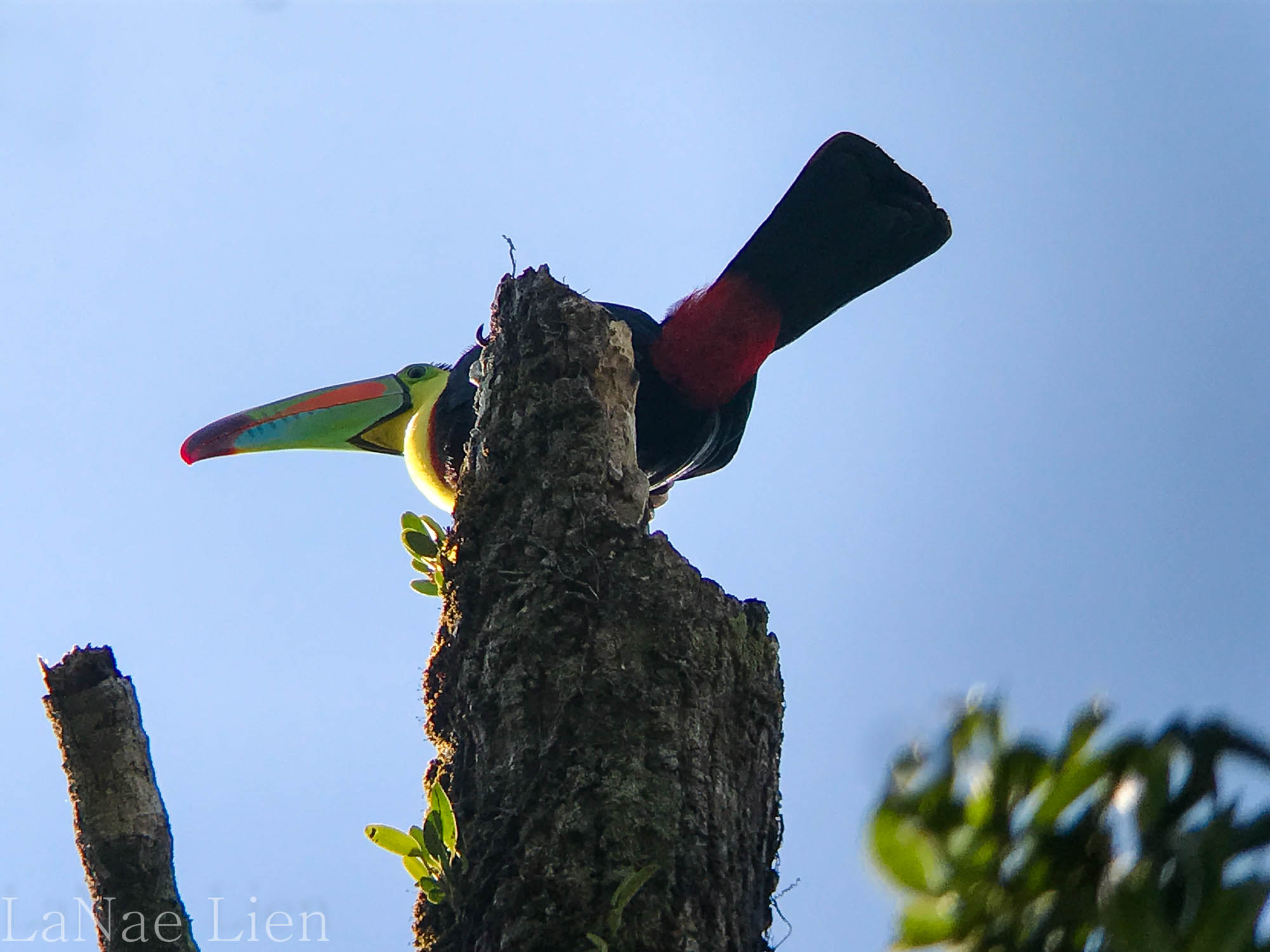 Let’s return to Costa Rica, shall we?  I left off with our arrival at Santa Elena in the Monteverde region.  The cloud forest.  We had been cautioned that temperatures could be quite mild in the area.  And drippy.  And cloudy.  We thought it sounded a lot like home.  For us, the temperatures were perfect.  While the sun and heat of Playa Hermosa and La Fortuna were welcome, we are, at our core, more mild-weathered folk.  Thus, going from 85+ degrees to 70-75 was blissful.  And still very easily shorts weather for us Washingtonians.

Cloud forests cover some 1% of global woodland.  They occur within tropical or subtropical mountainous environments where the atmospheric conditions allow for a consistent cover of clouds.  The clouds often take the form of fog, hovering around the upper canopy of the forest, before condensing onto the leaves of trees and then dripping to the plants below.  The sun has a hard time breaking through all of these clouds (though we did have a good amount of sunshine while we were in Monteverde), which results in a lower rate of evaporation.  The result?  Perpetual dampness.  I tested this myself and confirmed its accuracy.  Here’s how:  I washed out a few pairs of underwear in La Fortuna and hung them to dry.  They were dry the next day.  I washed out a few more pairs of underwear in Monteverde on the day we arrived and they weren’t dry until the morning we left.  It took almost two days longer to dry underwear in Monteverde than in La Fortuna.  Very scientific, yes?

What’s the result of all of this foggy moisture?  Lush greenness.  How green?  Well, for those familiar with the Hoh Rainforest in the Olympic National Park right here in the great state of Washington…it’s really green, right?  Like, smack you in the face, smother you in moss green?  I think the cloud forest may be greener.  Now, that’s a statement! 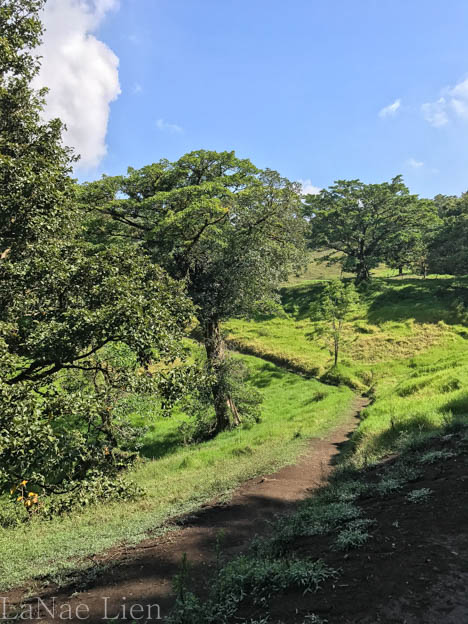 So, what does one do in such a lush green cloud forest?  Wander around in it!  Which is what we did beginning our first morning in the area.  The afternoon we arrived we spoke with the very helpful front desk guy at Arco Iris Lodge, where we were staying, and got his recommendations for walking tours.  We made a reservation for Sunday morning and were picked up at 7:30 am and transported to Curi-Cancha reserve, where we met up with our guide and a small group of fellow explorers. 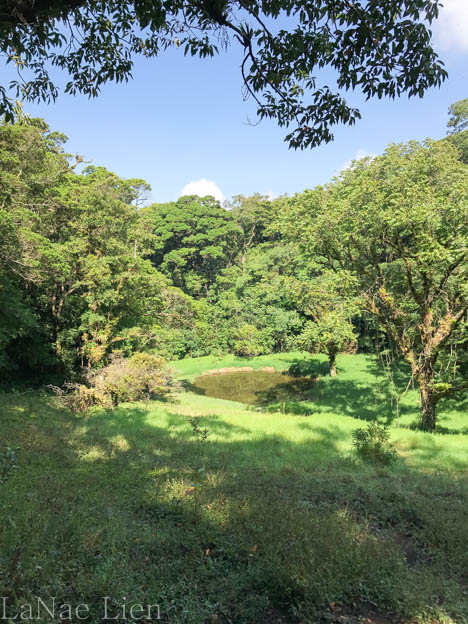 Before I describe our walk, I do have to share about the gift shop.  The husband has a soft spot for gift shops.  Actually, so do I.  However, he’s the one who will most often ask out loud, “So, is there a gift shop?”  We may not even buy anything, we just like to peruse.  Actually, best gift shop ever?  St. Thomas.  Mountain Top.  There is a beautiful view, but to get to the view you have to walk through the gift shop.  Which is the size of an airplane hangar.  I kid you not.  So much kitsch that it is utterly dazzling.  We spent a lot of time in that gift shop…giggling.

Anyways, as we drove to Curi-Cancha the husband asked me if there was a gift shop there.  I speculated there was.  And, there was: 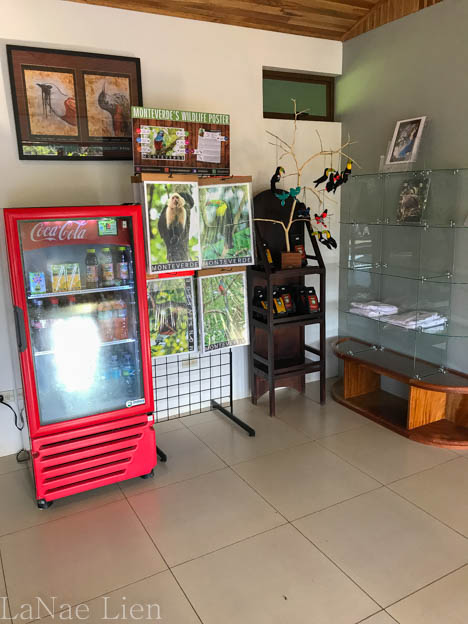 What kind of creatures did we see in Curi-Cancha?  A toucan (those never get old.  Ever.) The toucan photo is the featured image.  Isn’t he handsome?  That is a keel-billed toucan.

We saw a white-nosed coati in a tree: 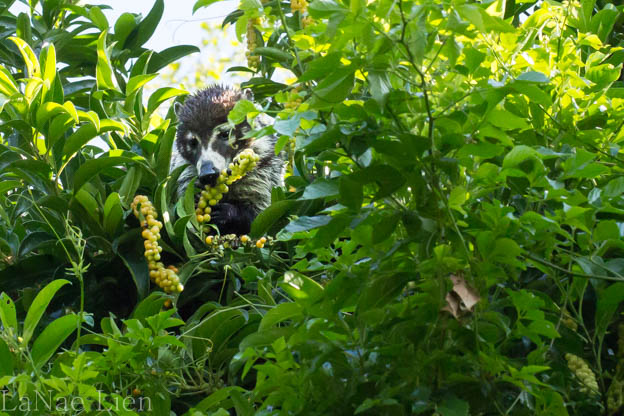 A band of capuchin monkeys.  Which was an interesting experience.  Our guide deliberately tried to stir them up, making a lot of noise, shaking branches.  It worked.  I feared a monkey attack was imminent.  No.  Not really.  Though I did think it unnecessary to stir them up.  I’m content standing there, headed tilted back, eyes wide, mouth agape, as they go about their normal monkey business. 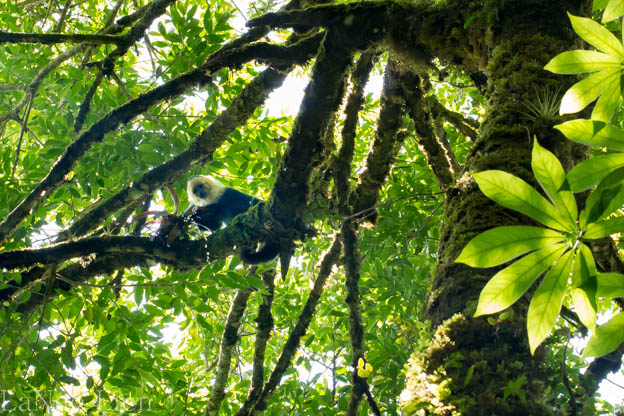 We also saw a motmot.  Gorgeous.

And an emerald toucanet: 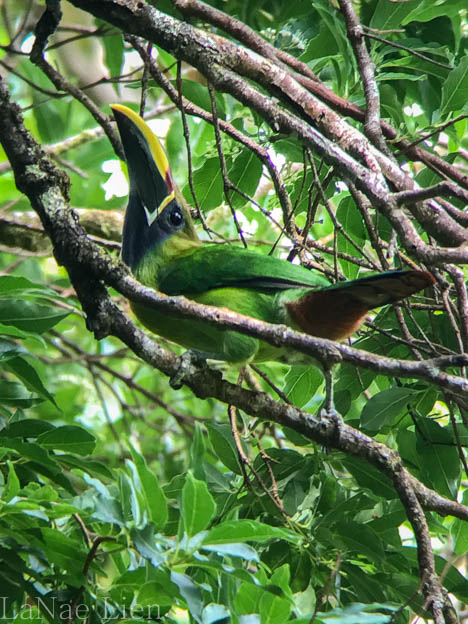 It felt like we saw quite a bit, but parts of the walk were also at a bit of a sprint.  I think our guide wanted to cover a lot of ground, which we did, but it was at a pace that didn’t allow for as much gaping as I would have liked.  At one point he moved aside a rope that closed off a less-used path and said, “C’mon, we’ll go this way.”  I glanced at the husband, eyebrows slightly raised.  Later we confirmed that we were thinking the same thing, “Brushy, less-used path = poisonous Costa Rican snakes.  Keep the guide in the front of the pack at all times.”  He was a really nice guy, though.  How can you not be a nice guy when you are wearing a baseball hat that proclaims, “Bird Nerd”?  He seemed to be capable of making an impressive number of bird calls, whistles, trills and chirps.  It was cool.

After our walked we were dropped back at Arco Iris and set out on foot to a local soda that was reported to have very good casado.  We were not disappointed.  We arrived around noon and were the only ones in the small restaurant.  It was not fancy, but there was a beautiful mural on one wall.  One thing about meals in Costa Rica:  they’re intended to be lengthy.  An odd concept for us Americans, who tend to eat and run…or eat while running, to grasp.  The first couple of times we ate out in Playa Hermosa it was at the restaurant of the hotel we were staying in.  I noticed that after we were served we weren’t really checked on again and that the amount of time between service and the check was lengthy (we were actually asking for the check).  I attributed it to less-than-attentive service at that location (though I now understand it’s a cultural thing…therefore, my problem, not theirs).  Then we moved to La Fortuna.  Same experience.  Pura vida.  Sit back.  Enjoy your food.  Enjoy the company.  Stay a while.

I also think we missed an experience by not eating out in the evening.  Most often we would eat a large lunch and not eat dinner, or just grab a snack.  The few times we were out-and-about around 8 pm I noticed that the restaurants were crammed with people.  Often when we ate lunch we were about the only ones in the restaurant.  Note to self when we return to CR:  eat late….linger.  Stupid Americans.

Just as we finished lunch it started to drizzle.  We walked back down to Santa Elena proper and made our way to the Monteverde ice cream stand located in the middle of town.  Yes, Monteverde has a cheese factory and they make ice cream.  Dreamy.  We each ordered a cup of coffee (when in Costa Rica….) and sat under an overhang and watched it pour down rain.  In our shorts.  Eating ice cream.  With big grins on our faces.

​That evening (but, wait, there’s more), the rain had abated (we really lucked out with rain.  Showers every day in La Fortuna and Monteverde but not once did we get dumped on while out on a trail) and we were scheduled for a night walk at…well, I don’t remember the name of the place and it doesn’t look like I wrote it down.

It was a pleasant walk, though relatively uneventful.  Our guide Jesus (he joked that he’d been very popular a couple weeks before.  Easter), was a likeable fellow, though we again found ourselves rushing through the forest as he spoke on a walkie talkie with another guide.  Apparently there was something exciting on the other side of the refuge, though it was gone by the time we arrived.  Still, we saw a couple of snakes that could do some damage if they bit you, and a tarantula. 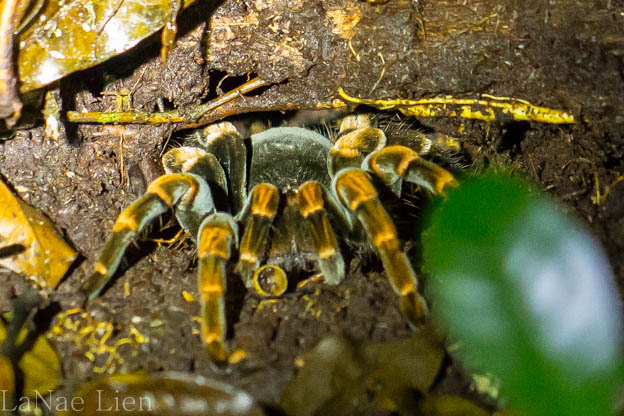 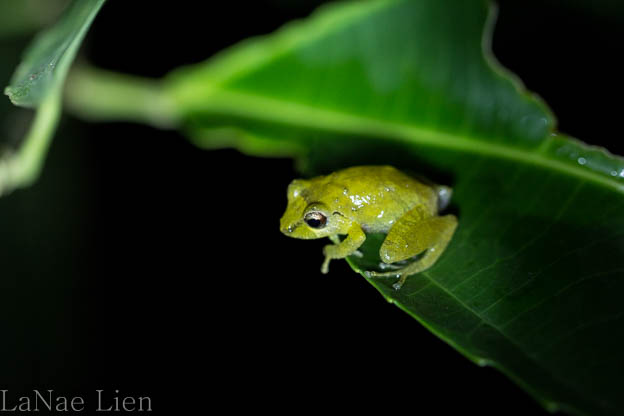 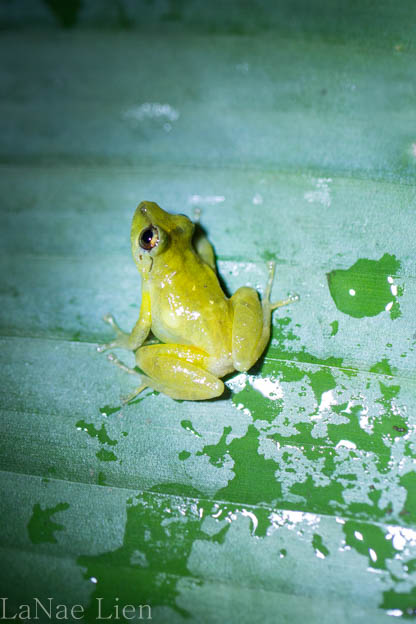 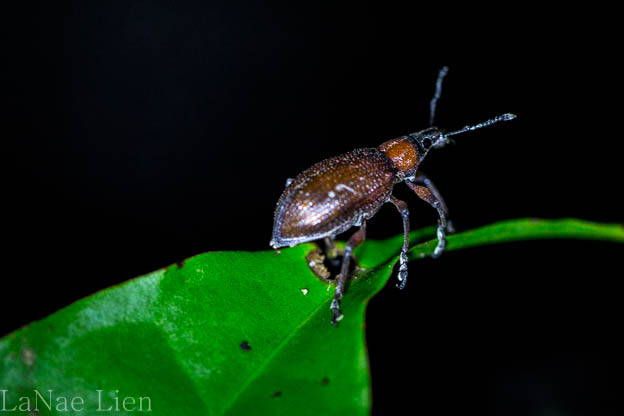 Oh, oh!  And a sleeping toucan (who was no longer sleeping after we shined our flashlights on him, though he refused to look at us.  Can’t say I blame him.  I’m grumpy when awoken from a sound sleep, too). 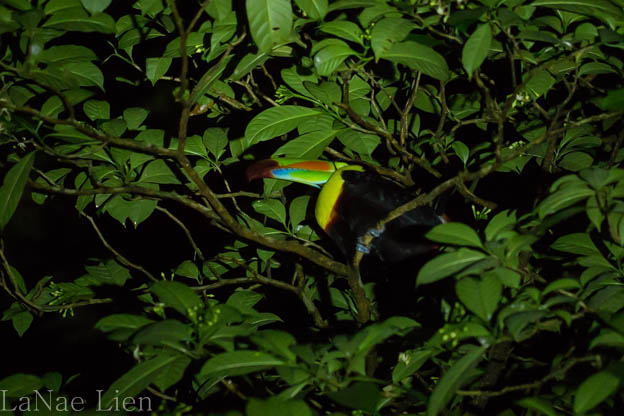 We were escorted back to where we started by a friendly cat that joined our group somewhere along the way.  She apparently joins groups, during both day and night walks, on a fairly regular basis.

We were back in the room by 8:30.  In bed by 9.  Pura vida.  Our time in Costa Rica was drawing to an end.  How much more could we cram in the day and a half we had left before transitioning back to the airport?

3 thoughts on “Entering the Cloud Forest”