This year is following the same path.  Today is the actual big day.

Birthdays should never be on workdays.  It seriously cramps the celebration.  Though the weather turned out nicer than expected (the original forecast called for an 80% chance of rain).  Sometimes I do so envy those summer birthday people who get to have outdoor bbqs on their birthdays.  I was hoping the husband would come through with a summer birthday for us.  Nope.  January.  Even deeper into winter.

So, I’m stuck with November.  Ever a Scorpio.  Except I’m apparently not that anymore. Did you hear that some shmoe at NASA changed the Zodiac calendar?  If you google that there are a number of articles that come up defending the shmoes at NASA, saying they didn’t change a thing, that they just did the “math.”  Apparently, when the Babylonians created their calendar it had 12 months, so they just left out a 13th constellation that was a part of the zodiac.  Enter Ophiuchus…which no one can pronounce and, if pronounced the wrong way, sounds a bit like a curse word.

The stance NASA took?  Astrology isn’t real science.  “No one has shown that astrology can be used to predict the future or describe what people are like based only on their birth date. Still, like reading fantasy stories, many people enjoy reading their ‘astrological forecast’ or ‘horoscope’ in the newspaper every day.”  The scientists have gone snooty on us.

Do I subscribe to the whole astrological thing?  Nope.  But, everyone knows what their astrological sign is, right?  And the basics of what it means, right?  Always been a Scorpio. But, now I’m a…hold on…let me look it up….a Libra.  Huh?  Actually, the statistical possibility of being a Scorpio has narrowed significantly as it now spans November 23-29. For real.  Sounds like NASA gave us the big squeeze to fit in O-fuch…ahem….

That was a tangent.  But a fun one.

So, how did we celebrate my big day(s) this year?  Well, on Saturday we headed up to Tacoma and checked into a hotel that sits right on Commencement Bay.  We had dinner at Indochine, a super-yummy Thai restaurant downtown Tacoma, acquired a $25 ticket for not paying for parking (in our defense, you used to not have to pay on Pacific, it was dark, and not well-marked), then went to a show at the Tacoma Comedy Club.  Ever the “party ’til dawn” sort, we were back in our room by 10:30.

After a lazy Sunday morning watching the rain fall on the bay we wandered around town a bit, stopping at a bookstore, a liquor store for whiskey to add to afternoon hot toddies and checked out the W.W. Seymour Botanical Conservatory (built in 1908.  Check out the history here.  Leave it to me to find an indoor garden on a rainy November day.  And the hot toddies were delicious. 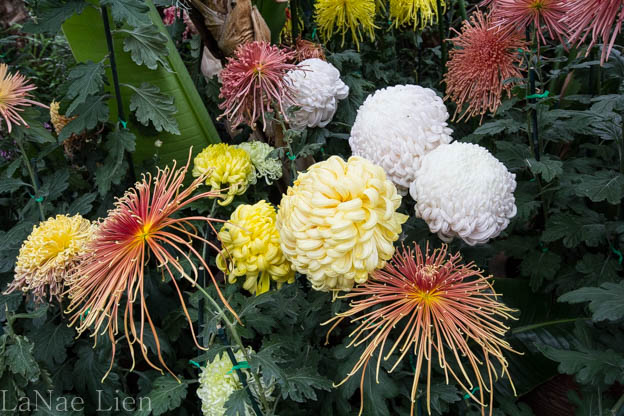 Today?  Work.  Pedi.  Burgers and shakes for dinner, a few presents and lots of cards in the mail.  And an age that is still closer to forty than 50.  🙂

8 thoughts on “The Three or Four Day Birthday…Birthday”