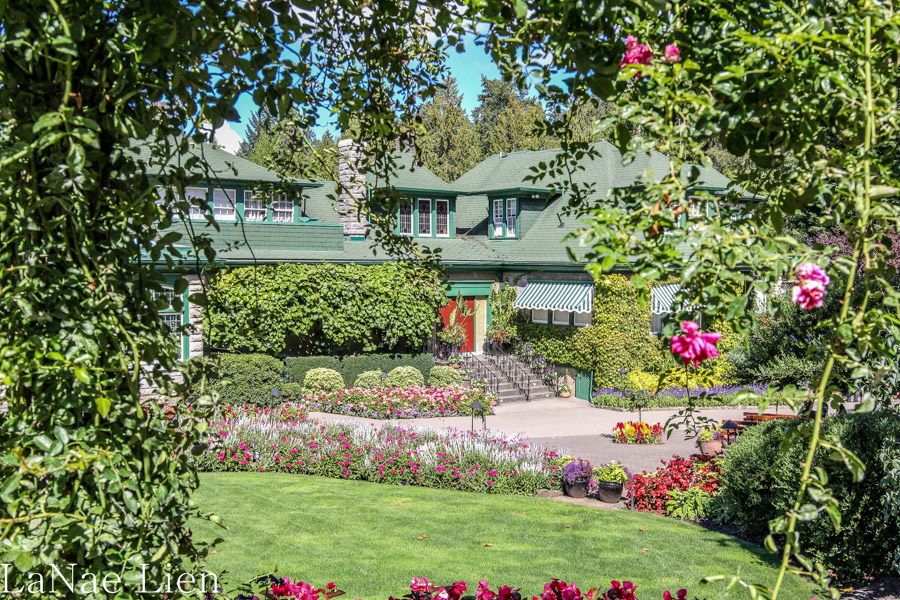 As we entered the gates of Butchart Gardens I may have twirled.  I also may have been singing, “It’s the mooooossssttt wonderful time of the year….”  Yes, it was better than Christmas.  It was the day that I got to visit one of the most beautiful gardens in the world. However, while I was stuck on the Christmas theme the husband looked at me and said, “You know what today is?”  I paused in my twirling and asked, “What?”  He proclaimed triumphantly, “It’s your Superbowl!”  And so it was.

When we entered the main courtyard of the gardens I was immediately drawn to the massive hanging baskets and the vibrant flowers…everywhere.  The grounds were heavy with begonia, impatien, zinnia, black-eyed susan and marigold.  We wound our way to the sunken garden, the magnificent masterpiece of Butchart Gardens, and paused at the overlook.  I believe I gasped.  It truly is an amazing sight to see.  And, we were there relatively early, so had an opportunity to wind along the paths of the sunken garden without a lot of people cluttering up my flower bliss. 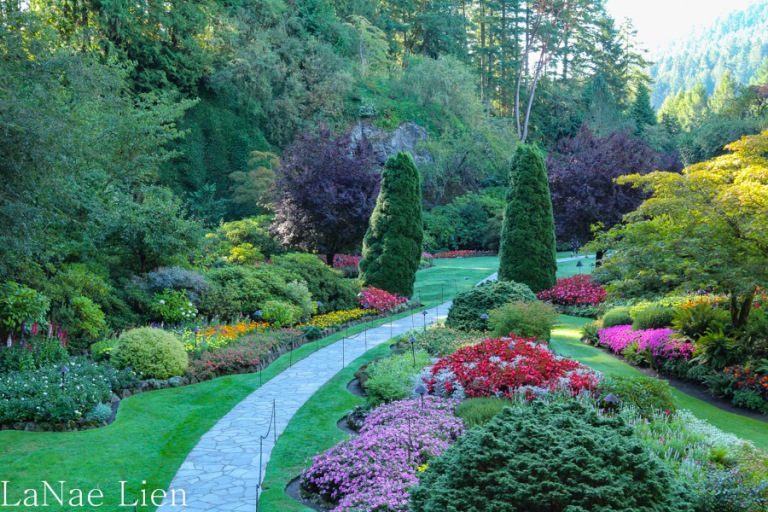 I kind of figure that Jennie Butchart was a force to be reckoned with.  In my mind, the conversation started out something like this:  “Honey, I think I’d like to plant a few flowers.  You know that old limestone quarry?  Maybe I could borrow a few of your men and plant a few flowers in that quarry.”  Robert Butchart responded, “Sure, dear, if that’s what you’d like to do.”

And so it began…. 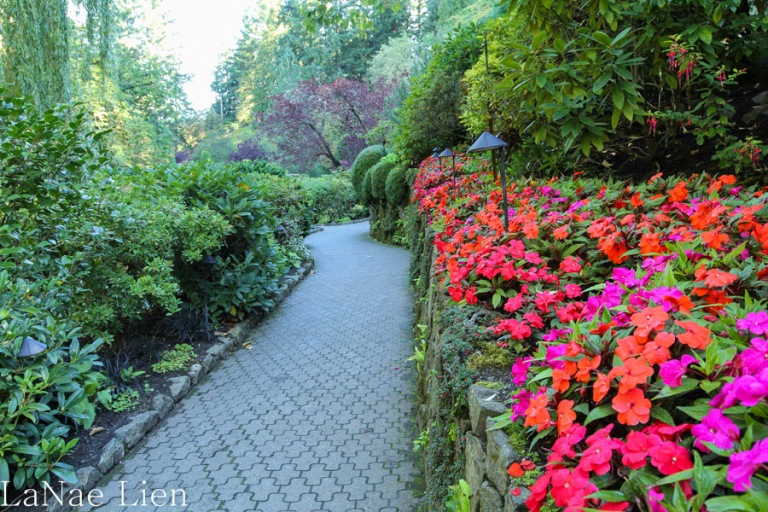 I also wonder what the men, “borrowed” from their regular work thought when they first presented themselves to Jennie to assist with her flower bed.  I suspect they may have thought they were in for an easy gig, especially when one considers their normal work. However, I also suspect that they greatly underestimated Jennie and had no idea that they’d be moving heaven and earth and tons of dirt to make what is today the breathtakingly beautiful sunken garden at Butchart Gardens. 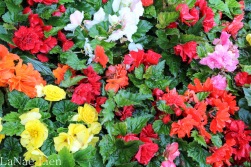 We learned quite a bit about the gardens as we rode to and from it in a double-decker bus. We learned that Jennie Butchart was known for being adventurous.  We found out that she and Robert moved to Vancouver Island from Ontario in 1904 to establish a cement company and that not all went as planned, initially.  Robert and a couple of business partners struggled to find the right mix to produce a solid product.  In relative short order, the business partners wanted out, and Robert bought their shares and was on his own. 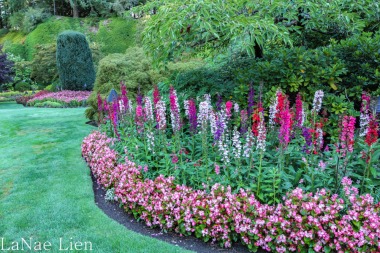 Things were not looking good until Robert took a trip to…I think he went back to Scotland?…where he was born.  He came across some guy (like my historical accuracy?) who was in the cement business…the good cement business…who agreed to show Robert his technique and share his “recipe”.  Robert returned to Canada with this new-found knowledge and the Vancouver Island Portland Cement Company took off.

Now, lest you think Jennie was just sitting around sitting pretty, let me assure you she was not.  In fact, Jennie became the company’s chemist.

Robert remained nervous that there would not be enough demand for his product to make a living, but the 1906 San Francisco earthquake and the resulting devastation drove up the price of cement.  After that, business just kept on getting better. 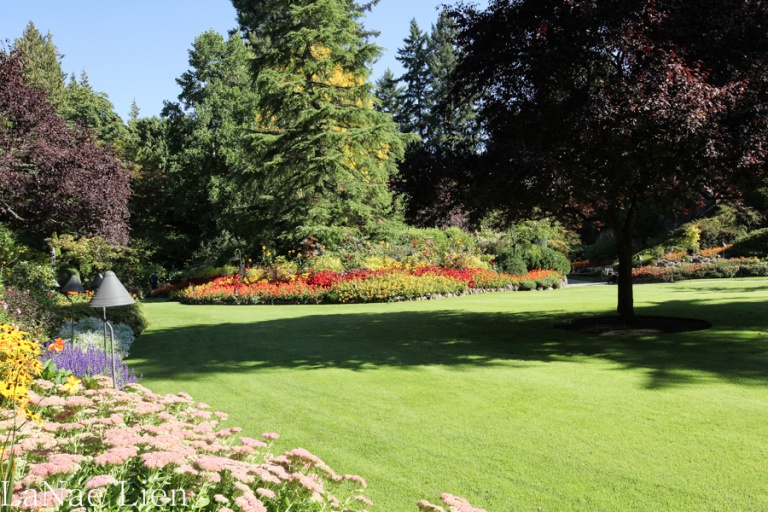 The problem was that as the quarries were stripped of their limestone they were left as huge gaping holes in the earth.  Not very pretty to look at.  And, it so happens that the first quarry was very close to Bob and Jennie’s small cottage.  Close enough that Jennie could see it.

And she found it unsightly.

Jennie didn’t know much about gardening at that point, but she figured it was worth a try. Work on the sunken garden started in 1909.  It wasn’t complete until 1921.  Bob had no idea what he was in for.

First, gardens require dirt.  Right?  How much dirt do you reckon existed in a defunct limestone quarry?  This is where the men helping Jennie probably realized that it wasn’t going to be the walk in the park they thought.  From farmland nearby, she had tons of top soil brought in by horse and cart and used it to line the floor of the abandoned quarry.

As the floor of the quarry was transformed Jennie found herself bothered by the stark rock walls surrounding her.  How to get plants to grow on those limestone walls?  The answer? Ivy.  She dangled on a boson’s chair (essentially a wooden plank held by two ropes) and tucked ivy into the cracks and crevasses.  As we know, ivy will grow about anywhere…and it took off in short order, covering the walls with a mass of green.

A couple of other features of interest in the sunken garden include the limestone hill and the pond.  The limestone hill was created out of necessity.  This was actually an area of sub-standard limestone that was not pulled out of the quarry.  I imagine that Jennie may have asked Robert to remove it as she worked on the garden…and Bob may have told her to take a flying leap and to garden around it.  It is massive. 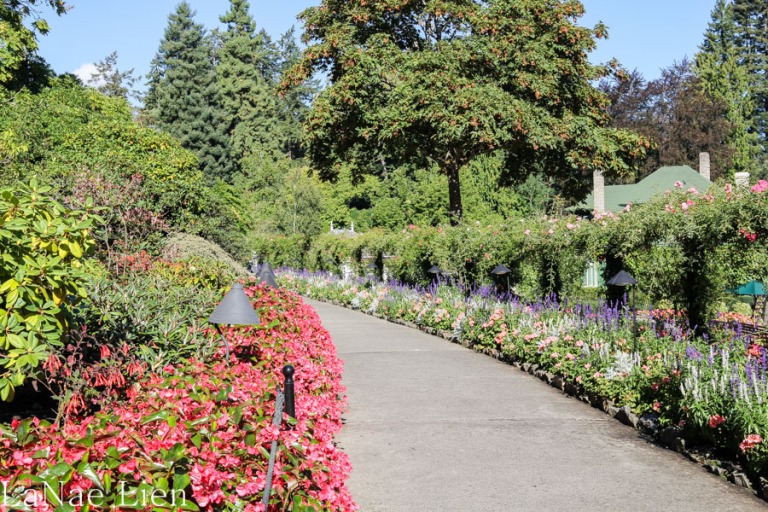 The answer?  Turn it into an overlook.  You would never guess that this hill is a chunk of limestone.  It’s covered with plants and flowers and trees and has a steep set of stairs followed by a steep path to its top.  From the top you can turn 360 degrees and take in the garden from a different view.  Nicely done, Jennie.

The pond was once a deep hole in the quarry.  Deep enough that the idea of filling it in was not an appealing one.  Instead, it was lined (with what I don’t recall) and filled with water and water plants.  Viola!  Instant water feature!  No, not the water feature below…that’s Ross fountain. 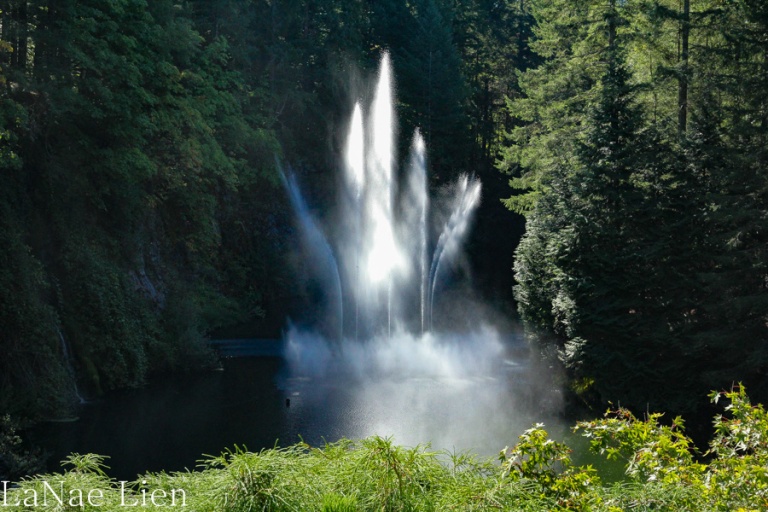 We left the sunken gardens and passed the Ross Fountain, installed in the 1964 by the Butchart’s grandson to celebrate the 60th anniversary of the garden.  From there we wound up to the wide open space that houses the area where concerts are held during the summer, past the carousel and a couple of fountains, through the dahlias and down to the rose garden.  Unfortunately, it was a bit late for the roses.  Another time.

During the entire time the sunken garden was being built, Jennie was coordinating other efforts around the property.  Because she’s a woman after my own heart.  Between 1906 and 1929, she created a Japanese garden on the seaside, an Italian garden on their former tennis court and a beautiful rose garden.  And, somewhere in the midst of this all they build a grand house, which is now the main restaurant.

We wandered through them all.  I was struck by the vibrant greens of the Japanese garden, and the husband realized that there are certain circumstances where cultivating moss is appropriate.  He suggested that we call our yard a Japanese garden during certain times of the year when the moss outweighs the grass.

The Italian gardens were a pop of color with clean lines and a star-shaped fountain.

I was a bit disappointed to discover that Jennie didn’t do this all on her own.  The planning, I mean.  At some point (probably after the cement business took off) she hired designers to assist her with the planning, though I’d like to think she had a heavy hand in it all.

Jennie began inviting people to her gardens early on.  And the popularity of the gardens grew with them. 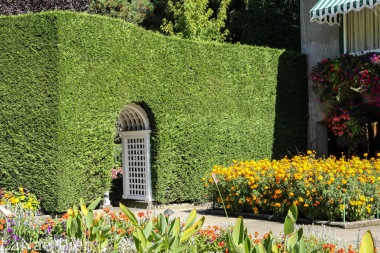 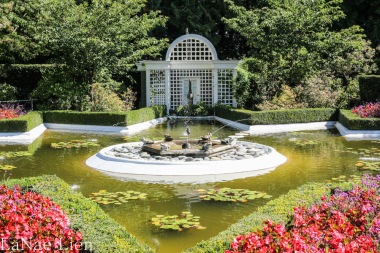 Jennie and Robert gave the gardens to their grandson Ian Ross in 1939, on his 21st birthday.  Robert and Jennie were still alive (he died in 1943, she in 1950), but they were quite elderly and it was time to hand over the reigns.

After service in WWII, Ian worked hard to make his grandmother’s garden self-sustaining, transforming the mostly neglected home and gardens into an internationally famous destination. For 50 years he was completely involved in its operation and development. In summer months he added outdoor symphony concerts (1953-1967). 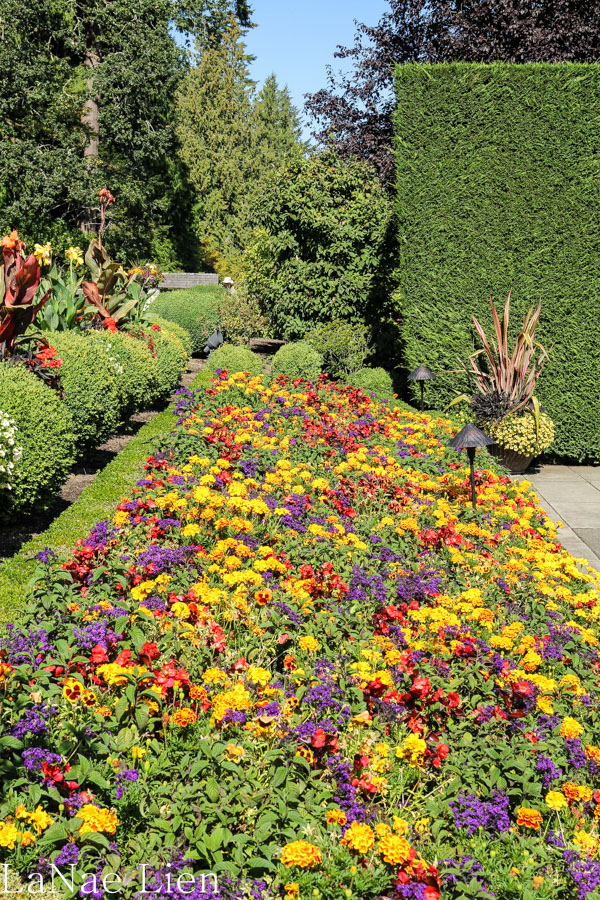 The gardens were also illuminated for the first time when, in 1953, miles of underground wiring was laid.  Ian died in 1997.  However, the family legacy has been carried on by the Butcharts’ great-granddaughter, Robin-Lee Clarke, who remains the owner and managing director at this time.

The Italian garden sits along the edge of The Dining Room, which was Jennie and Robert’s private residence.  We had lunch reservations and were seated at a table overlooking the home’s private garden.  This garden was Jennie’s haven.  It was the only garden never open to the public, and it remains that way today.  I enjoyed tea while the husband ate what he stated was “the best burger ever”.  When my multi-tiered tea tray came out filled with bite-sized savories and pastries, followed by his burger, we heard a guy at a table near us say, “Hey…I didn’t know I could get a burger.”  I glanced over my shoulder and he had a tea tray before him…and a somewhat disappointed look on his face. 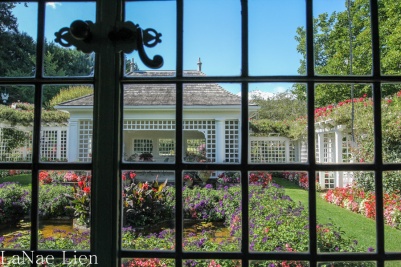 View of Jennie’s personal garden from our lunch table. 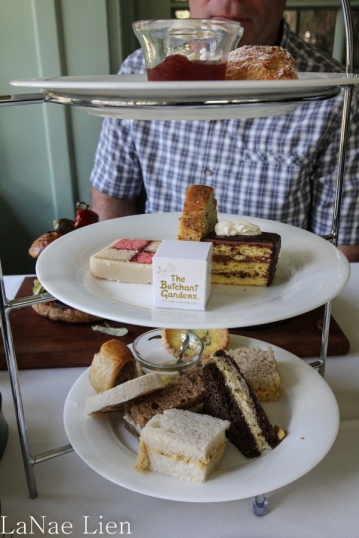 After lunch we had a bit of time before catching the bus.  I took a tour of the gift shop, picking up some tea and a beautiful bone china tea cup covered with sweet peas, one of the first flowers Jennie planted.  It’s gorgeous and delicate, but the size of a tall mug so it’s actually useable.

My shopping complete, the husband asked if there was any part of the garden I’d like to return to.  Of course.  Back into the sunken garden we went, marveling over the beauty and wonder if a place that began as a rocky hole in the ground.