We made our annual trek to St. Michelle winery this last weekend for a summer concert. We’ve gone yearly for too many years (and artists) to count.  Harry Connick, Jr., Alison Krauss, Lyle Lovett, Amos Lee…etc., etc.  This year we had some difficulty finding an artist that we wanted to see on a weekend we were available.  Which is why we ended up at Jackson Browne.  Who wasn’t even on the “wanted to see” list.  But, hey, we’ve never gone wrong.

Nah, “wrong” is too strong of word.  I guess the biggest difference between Jackson Browne and other artists we’ve seen was…showmanship.  Harry and Lyle, in particular, put on a great show.  Not just music, but they both really engaged with the audience. Telling goofy little stories and chatting throughout the concert.  Not in a, “Hey, would you just shut up and sing,” way, but in a, “Hey, he’s more than just a singer…he’s a really cool guy,” way.

Jackson spoke very little.  Just played music.  Which would have been appreciated much more if we…well….knew his music.  Which we didn’t.  So, some engagement would have been good.  Don’t get me wrong, he’s a really talented guy.  But, this is the first show that we packed up and left at the tail end rather than staying and staring at the stage in disbelief that it was over.

We headed up to our hotel in Redmond around 10 am.  We stopped at the local fruit stand on our way out of town and picked up some summer stone fruit to go with our picnic, then stopped at Whole Foods once we reached Redmond.

I love Whole Foods.  I’m actually really excited that the place that I’m staying in Santa Fe in October is just a couple of miles from a Whole Foods.  That will probably be my go-to dinner spot.  Well, with the exception of one night.  I can’t go to Santa Fe without indulging in a Southwest meal.  However, even though I love Whole Foods the husband and I agree that we don’t understand how people shop regularly at Whole Foods.  Assorted cheeses, a small loaf of french bread, a bottle of wine, salami, a couple of small containers of salads from the deli, three sandwich cookies (from the bakery…homemade cookies with thick frosting sandwiched between…heavenly!!), two packages of gnocchi (for home…they have fantastic gnocchi), a bottle of water and some new reusable grocery bags (I love their bags) ran us $70.  Holy crap!

With our expensive dinner in hand we arrived at the hotel where we put everything away and then walked down for a cheap lunch at Qdoba.

Did I mention that it was 90 degrees?

After lunch we returned to the room to relax for a couple of hours.  The venue opens at 5 pm, but we usually try to get in line no later than 3:30 as it’s general admission seating and we like to get a good spot.  We were a bit concerned about sitting in the sun from 3:30 to 5, then moving into the amphitheater and sitting in the sun again from 5 until the sun set. You’ve met us, right?  We’re pasty people.

However, this year we lucked out.

There are two sides of the amphitheater.  We usually end up lining up on far side.  The dusty, super-sunny side as parking on the side closest to the winery shop is full by the time we arrive.  Not this year!  We packed our assorted supplies (Tommy Bahama chairs, roll-up table, picnic cooler, blankets, bag-o-stuff, etc.) and were instructed on where to set up our chairs in line.  Then, the line lady practically shooed us away, telling it was too hot to sit in the sun, that we should take a blanket and go find a shade tree.  Far be it from us to disregard the winery line lady!  Before settling ourselves we went into the wine shop and perused the offerings.  It was a bit warm for red, so we bought a chilled Riesling and settled ourselves onto our blanket for a few competitive games of Uno.  The time passed quickly (as did that bottle of cold wine) and before we knew it we were making our way into the amphitheater.

We set up all of our junk and went back to the wine shop.  Yes, to shop, but the AC was also a huge draw.  We returned to our chairs and spent some time sipping wine and people watching before busting out the food.  It may have been expensive, but it sure was good. 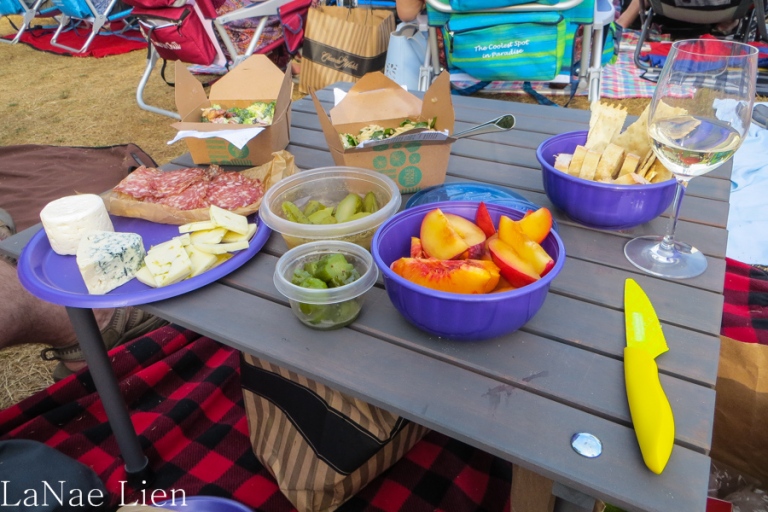 The music started and we kicked back, enjoying the beautiful summer evening as it slowly cooled down.  We watched a couple of hot air balloons chase each other across the sky. Watched the moon grow brighter as the sky grew darker.  Pretty close to pure bliss that evening.

As noted earlier, we packed up a bit early (but beat the traffic as a result) and headed back to the room.  Another successful year…can’t wait for the next!

2 thoughts on “Wine, Sun, Food and that Musician Guy”