Yesterday underlined the reason I would never live anywhere (on a permanent basis) other than the Pacific Northwest.  See for yourself: 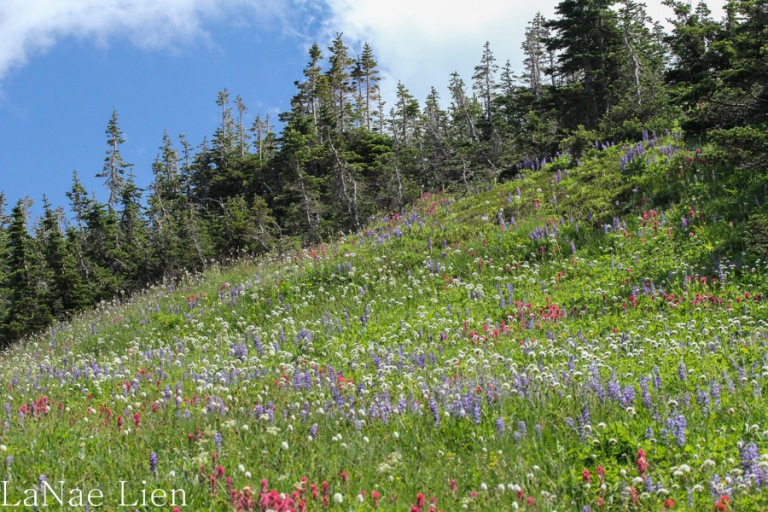 Actually, before we get to that allow me to give you an update on the status of my entries into the county fair, both photos and flowers.  I told you about watching most of the judging last Sunday here.  I didn’t stay for the judging of three of my photos, so I was eager to see how I’d done.  I also entered three varieties of dahlia and a hydrangea blossom into the floral exhibit.  So, on Friday evening the husband and I headed to the fair.

We paid our $7 entrance fee and headed to the flower exhibit hall.  Victory!  My hydrangea and one dahlia won first place, another dahlia second and the final third.  Maybe I should ditch this photography thing and focus on flowers!

From there we went to the photography exhibit hall.  In addition to seeing how my final three had done I wanted to get a closer look at some of the first and second place winners. I am happy to report that I added an additional third place ribbon to my collection for a tulip photo that I entered.  That takes me to a solid 50%:  I entered eight photos and won four ribbons.  Three third place and one honorable mention.  Not too shabby.

We left the photography hall and wandered over to “food row,” thinking that we’d get something for dinner.  We walked up one side…and down the other…looked at each other. Stopped.  The husband said, “Ummmm….do you want to go to Brewery City for calzone?” Me:  “Heck yeah!  Let’s get a few scones to go and get out of here.”  One hour and $20 spent and we walked out of the gates of the big fair.

On Saturday morning we headed back to the Sunrise side of Mount Rainier National Park. We were there a few weeks ago for this hike.  We left the house around 7 and expected to reach the Sunrise parking lot a little after 9.  It was more like 10 because they only had one forest ranger taking money and checking passes at the entrance gate.  On a Saturday.  In August.  Really?!  We have the America the Beautiful pass, which means all we have to do is flash the pass and ID and we’re set.  To have to wait in line for almost an hour in order to do so was frustrating, to put it lightly.

We parked, threw our packs on our backs and set out eagerly under sunny skies with vivid views of the mountain.  Note to self:  if the mountain is showing herself on the way in take photos because she may be clouded over on the way out.  Ahem.  You’d think I would have learned that by now.  But, that’s okay.  The true focus of this hike was the wild flowers.

Actually, this was not the hike I intended for us to do this weekend.  I had previously set my sights on Grand Park, a hike we’ve not done before that is supposed to be a combination of meadows and stunning views of the mountain.  However, multiple recent trip reports on the WTA (WA Trail Association) detailed a mama bear and two cubs hanging out in one of the meadows.

Nope.  Not gonna do that hike.  Not right now.

Which brought us to Berkeley Park.  We’ve done Berkeley before, though it’s been years. The hike starts along Sourdough Ridge and heads to Frozen Lake before forking three different directions.  That first part of the trail is like Grand Central Station in the summer.  Hiker etiquette is unheard of.  Meadow trampling is common.  The only positive is the views of the mountain.  Once we hit our fork, though, the vast majority of the traffic faded away.

Ahhhhh…..we could breath.  The trail began a gentle descent.  The mountain dropped out of view.  And the wild flowers began to make their presence known.  When we dropped to the floor of the valley we entered Berkeley Park and the wild flowers rolled out their carpet to greet us.  Magenta Paintbrush, Broadleaf Lupin, American Bistort, Gray’s Lovage, Pasqueflower Seedheads, White Mountain Heather, Elephant’s Head, Pink Mountain Heather.

As I mentioned in my entry to the Weekly Photo Challenge, I cannot fully describe to you what the meadows surrounding Mt. Rainier look like in the summer.  Nor do the photos fully capture them.  They are a sight that can only be understood when you’re standing in the middle of them (on the trail!!  Stay on the trail!!!).

We were winding our way through the meadow, heading for Berkeley Park camp, our turnaround point four miles in, when I saw movement out of the corner of my eye.  I pointed to the ridge across the way and, matter-of-factly, said, “Bear.”  My heart may have skipped a beat or two.  I watched said bear wiggle, wiggle, wiggle around…and suddenly split into two….bears?  Huh?  The husband was digging through his pack for the binoculars when I started giggling.  “Marmots.  Two of them,” I corrected myself. Wrestling.  Chasing each other.  Loving summertime in the park as much as we do.

Holy crap.  If I thought that two marmots looked like a bear from a distance how big is a bear going to look from a distance?  I mean, they were nice sized marmots, but one would think it would be hard to mistake two marmots for one bear.  Right?  We watched them for a few minutes, then headed on down the trail.  It was about that time that a new word entered our vocabulary: bearanoia.  Bearanoia:  Adjective.  An unreasonable fear of running into a bear on a hiking trail.

Ummmm….that would be me.  We’ve never seen a bear while hiking.  But, we’re hikers. In the Pacific Northwest.  Often seeking trails that are not well-traveled (though there were plenty of people in Berkeley Park yesterday, including a twenty-something-year-old with a flute that we agreed, were we a part of his group, we would have grabbed at some point and chucked into the swift moving stream that runs through much of Berkeley Park.  Oh, wait, that would be littering).  Usually hiking quietly.  And unwilling to pack bear bells.  I mean, if the flute drove us crazy and we only heard it for a couple of minutes, imagine what bear bells would do to us after listening to them ding-ding-ding-ding-ding-ding-ding all day long?

Bearanoia.  We think it should be added to Webster’s. 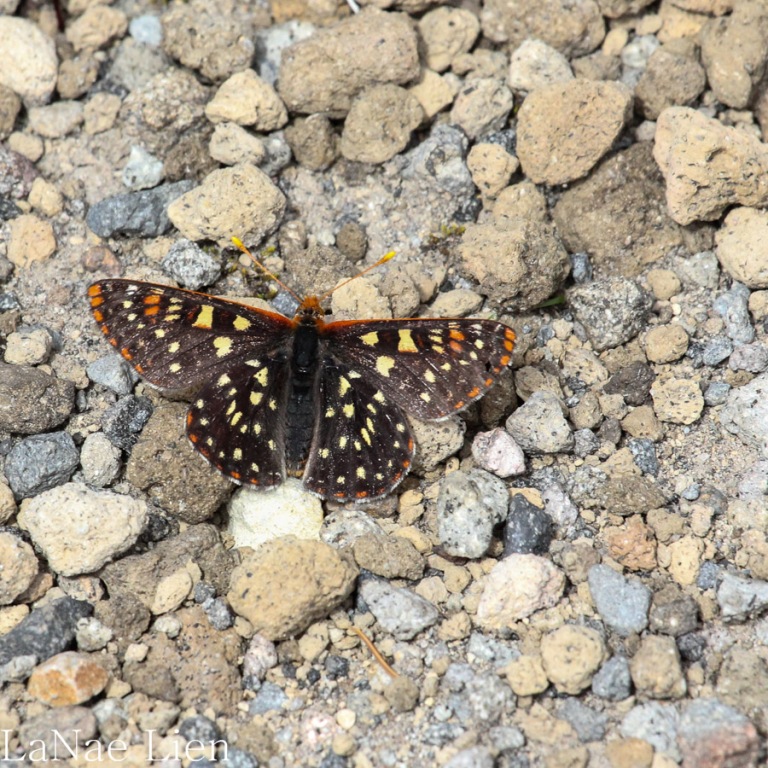 We turned around at the camp and, on our way back through the meadow, found ourselves a very nice lunch rock.  We lingered in the sun, drinking in the views and enjoying our lunch in a bug-free environment.  Yes.  No bugs yesterday.  No skeeters.  No biting flies.  It was heavenly.  We eventually packed up and headed back out.  When we hit Grand Central Station, which had birthed a multitude of people during our foray into the Park, we put our heads down and our blinders on.

The return ride home was uneventful…with visions of wild flowers dancing through my head.  Oh, the knees.  You may be wondering how the knees fared.  Well.  We did 8 miles, which is the most we’ve done this season.  It was an easy 8 with only about 900 foot gain. The right knee did well.  The left.  The last part of the trail is a descent and the left knee made it very clear that it had had enough of the day’s hijinks.  Let’s just leave it at that. Well, we could tell the knee to suck it…because who cares if it hollers when I get to see things like this: