Now, isn’t that an interesting title?  Care to guess what it stands for?  Something about BS?  Nah…that title perfectly describes how we felt about midway through our hike yesterday to Tolmie Peak.  What’s it stand for?  Thank Goodness for…Bug Spray.

To say they were thick is putting it mildly.  As hard as it is to imagine, they outnumbered the avalanche lily:

And, as you can see, there were gobs of avalanche lily.

The first part of the six mile round-trip hike was bug-free.  We hit the trail a bit before 11 and wound our way through forest.  So green.  Happy chirpy birds.  Too many people.  Not as many people as skeeters…or avalanche lilies…but too many for my taste.  There were few times on the trail that it was blissfully silent.  Sigh.  It’s summer time in the National Park.

The weather was not terrific.  We had hoped for partial clouds…which would mean partial sun.  It was not in the cards.  We did not even see Her Majesty yesterday.  Saw some cool fog.  And the overcast skies made for better photography.  But, no mountain.  However, the weather was comfortable and the flowers were on display, so who were we to complain?

We climbed through the forest on gentle switchbacks, making our way towards Eunice Lake. The trail levels out near the lake, taking you through an alpine meadow and around the edge of a beautiful high-mountain lake.  I was already blissed out before we even reached the lake.  The bear grass is blooming and plant after blooming plant littered the forest floor.  Love bear grass.  I also knew that after we passed Eunice Lake and began the final climb to the old watch tower on the top of Tolmie Peak that there was likely to be even more bear grass.  And tiger lily and paintbrush, though it’s a bit early still at that elevation (approximately 5000 feet).  In a couple of weeks those flowers will pop, along with lupine and a favorite of mine:  heather.

Of course, I wanted to stop and photograph each and every one.  Which is when we noticed the swarms (and I do mean swarms) of mosquitoes.  Luckily, I had on long sleeves (though the husband didn’t).  However, I had shorts on (the husband wore long pants) and the little blood suckers were swift and true.  We figured that once we got out of the meadow around the lake and started on up the trail that they would back off.

We passed others struggling with the same issue, but, unlike most of them, we had a secret weapon.  On the backside of the meadow we paused and I dug around in my pack, triumphantly producing a small can of Off.  I liberally sprayed myself while the husband elected a more conservative application.  We headed on down the trail, a cloud of bug spray trailing behind, the finest eau de parfume on the mountain.

Turns out the skeeters didn’t go away.  We passed people who had turned back because they were so vicious.  I felt smug.  We arrived at the watch tower and settled onto a piece of rocky ground for our lunch spot.  I watched with interest as people flapped their arms and groaned about the bugs.  I munched on my sandwich.  I became captivated with my husband’s white hat, which seems to be a bug beacon.  I ate a granola bar.  And took a photograph.

And one of a chipmunk, loving summer and the Cheetos people bring to his doorstep (no, I do not feed the wildlife).

On less cloudy days, Mt. Rainier is a glorious sight from Tolmie Peak.  Sigh.  Not so much yesterday.  Not even a glimpse of her.  It’s like she didn’t exist.  But, on the way down I got to enjoy bear grass.  And avalanche lily.  And other assorted flowers. 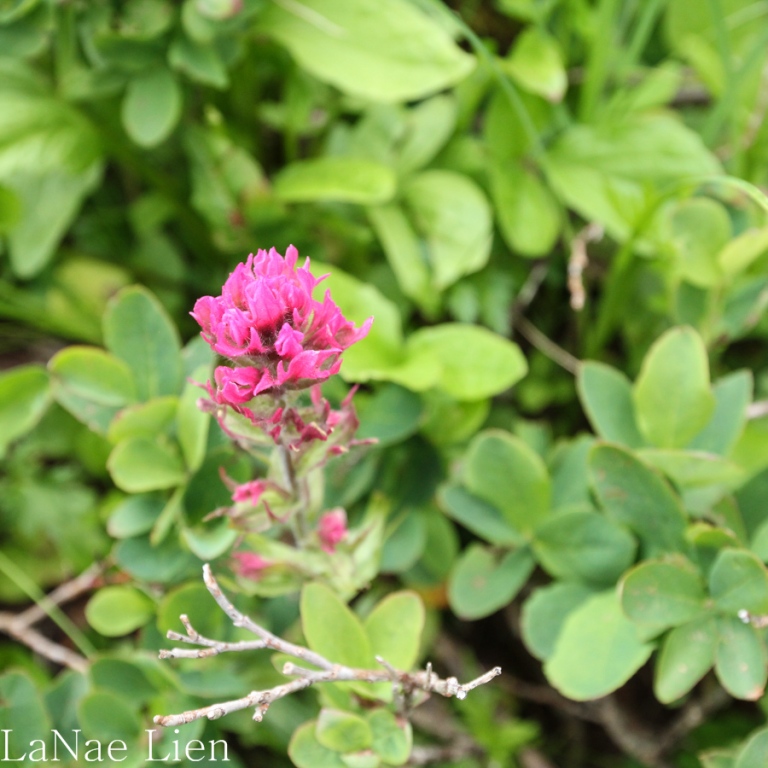 We climbed back in the truck around three and headed back down the wash-board, pot-hole-filled road (sometimes 17 miles seems a lot further than it actually is).  On our way home we stopped for big, fat burgers and beverages.  I tried to act casual about the odor of bug spray following me around.

You may be wondering how the knees fared, if you’ve been following my trials and tribulations.  I’m very happy to report that they did well.  Better than I expected.  This 6 mile hike involved an 1100 foot gain.  They chirped at me pretty steadily, but I noticed a difference depending upon if I was going uphill, downhill or relatively even ground.  And, they seemed to recover somewhat on the slopes they “prefer,” so there was no haze of pain by the end.  Perfect?  No.  Pain free?  Far from it.  Tolerable and manageable?  Yes.  I can’t tell you how very happy and relieved that makes me feel!  My hikin’ days are far from over!