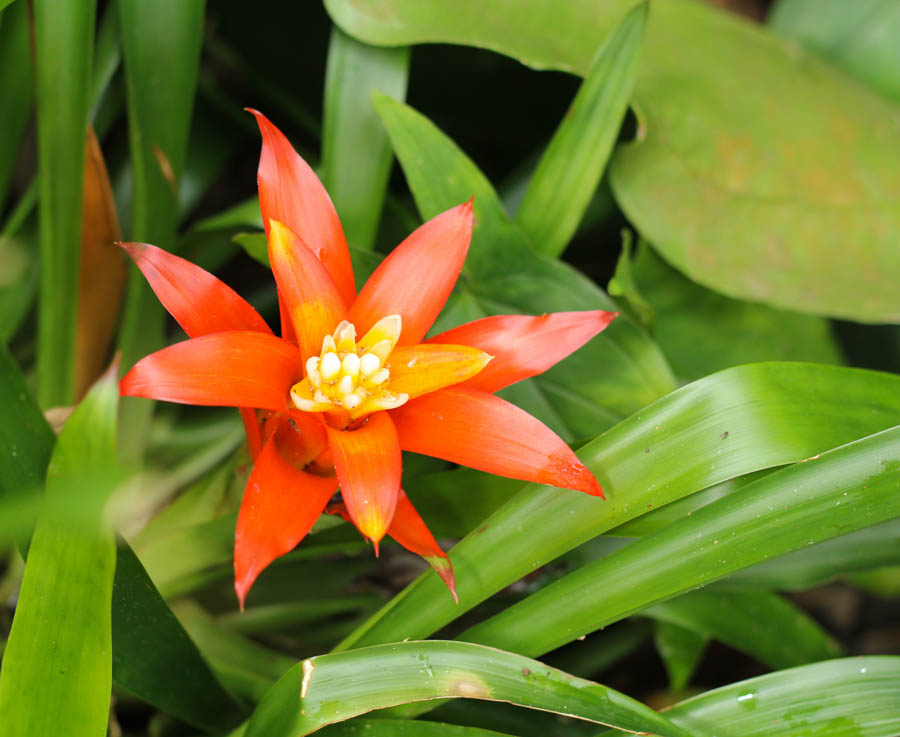 Let’s return to the Caribbean, shall we?

Cinco de Mayo was a busy day for us on St. Thomas.  Busy.  Biiiizzzzzzzyyyy.  Well, as busy as two people can be on a Caribbean vacation.

Let’s start with the list (I do so love lists), then we’ll break it down, shall we?

Maybe I should delete that.  There seems to be a bit of a theme…food….booze.  Ah, heck, at least I’m honest, right?

First, the day began like this (not too shabby): 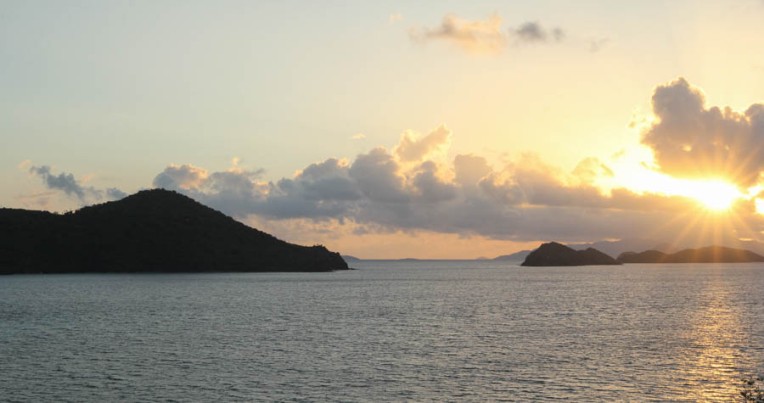 We started our day at Phantasea Botanical Garden.  I’m a sucker for a botanical garden, which is why we visited two while we were on St. Thomas.  Lucky for me, the husband doesn’t mind wandering around gardens while I take photos and ooh and ahh at pretty flowers.

We arrived just when the gates were opening, which meant that we were the only ones meandering the paths.  Which was really nice.  It’s just a nice garden.  Not real big.  Built on a hill (ha!  what on St. Thomas is not built on a hill?).  Lush.  Green.  Some really nice orchids and a great assortment of bromeliad.  How can one go wrong with that combination?

From Phantasea we climbed on up the road to Mountain Top.  Now, I was drawn to Mountain Top by the reports of the gorgeous views.  However, I didn’t know that you had to walk through an airplane-hanger-sized gift shop to get to the views.  I can’t help but laugh as I write that.  I am not kidding you.  We pulled into the parking lot and our jeep was virtually the only vehicle there.  We walked to the top of a staircase and goggled at the giant bottle of rum in the courtyard below.  You think I jest?

I do not jest.

We walked past the giant jug and entered the gift shop.  And laughed again.  It is the largest collection of kitsch I have ever seen in my life.  It was mind-boggling.  Mind-blowing. 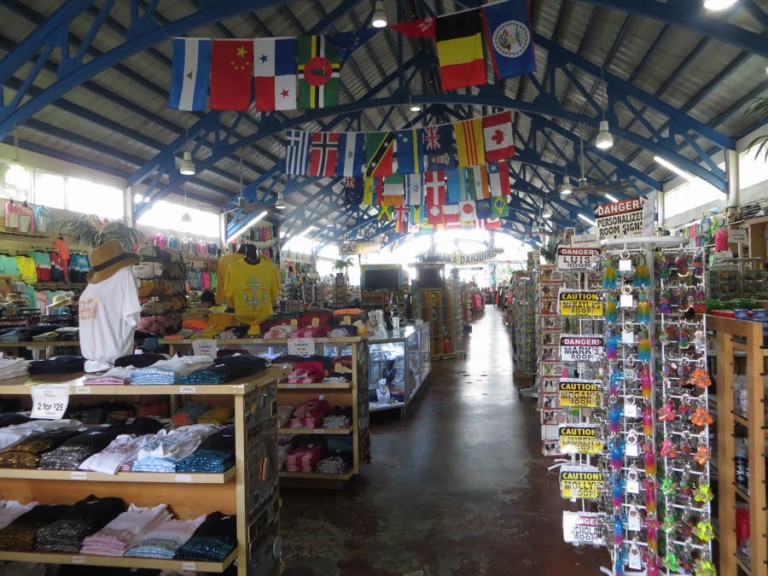 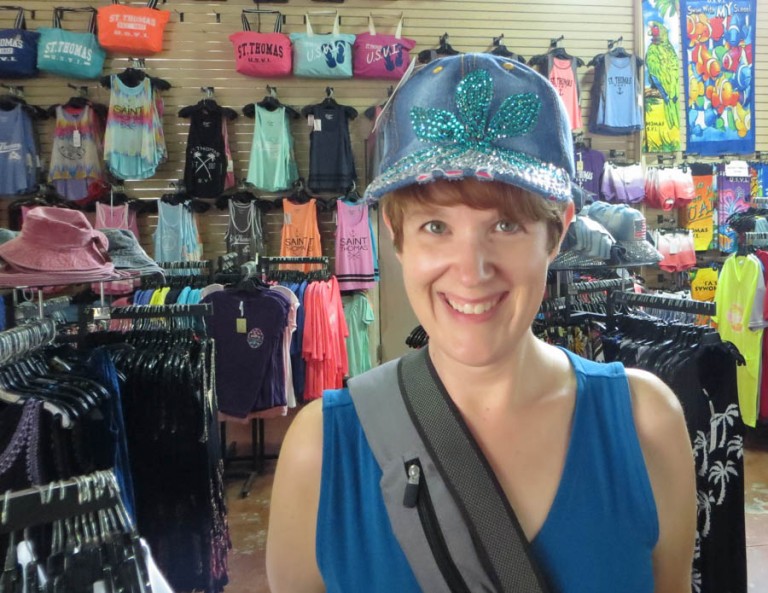 We started winding our way through the store…and got separated.  I don’t know how long I wandered, but there was a certain point in which there was a sudden influx of people.  A lot of people.  I was done, at that point.  But, I had to find the husband.  Which was challenging.  We at last reunited, made our purchases (yes, we got sucked into the kitsch vortex) and then made our way to the far end of the hanger to check out the view, by-passing the banana daiquiri the spanned the entire back wall of the hanger (I paused and considered, but it was only like 10:30 in the morning and even I couldn’t justify that).

Unfortunately for us, the fog had rolled in a bit that morning, obscuring the view. However, it was still breathtaking.

We left Mountain Top and set out for Magen’s Bay.  MB is touted is being as being St. Thomas’ most popular and most beautiful beach.  Most beautiful?  Sign us up!

All beaches on St. Thomas and St. John are public, so access is, in most instances, easy. However, there are two beaches on St T that charge you to get in.  Magen’s is one of them. After paying the fee and reading all of the “No” signs (it would appear that there is, generally, no fun allowed at Magen’s Bay) we parked and made our way to the beach.

Magen’s is a huge (I think it’s a mile long), white sandy beach.  There are changing rooms (nice), rentals (kayaks, stand up paddle boards, etc.), and a beachside concession stand (drinks, burgers, chicken strips).  It sits in a large bay, so is very calm.  A perfect beach for families.  In fact, it was relatively easy to pick out the Disney cruise ship crowd (the multitude of young children and Disney tote bags were a dead giveaway).  We wandered down from the crowd and commandeered a picnic table.  It was still early enough in the day to have some space to ourselves.  The slightly overcast skies helped.

We sat.  Then we went into the water.  Then we came back out.  Then we looked at each other. 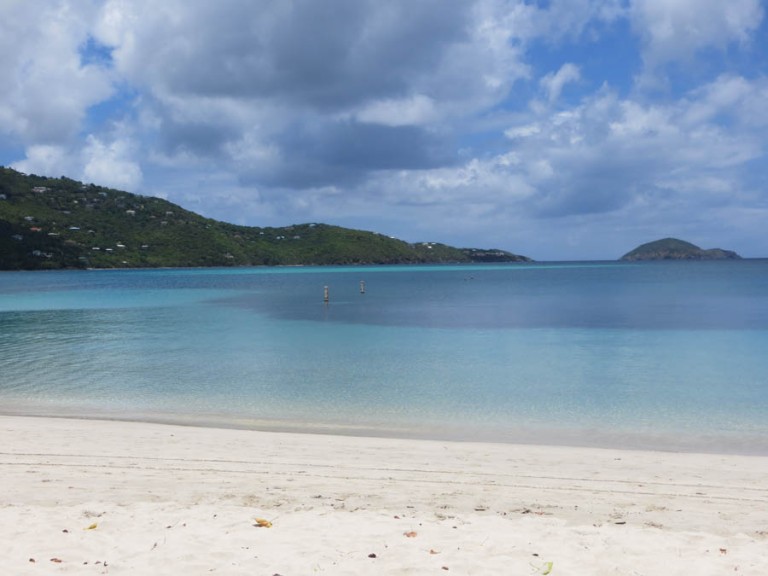 We lasted probably another 20 minutes, then headed back to the car.  There wasn’t anything wrong with the beach.  It was a very nice beach.  It just wasn’t our kind of beach.

Udder Delight specializes in milkshakes.  In fact, that may be the only thing on their menu.  That’s certainly all we were looking for.  Their true specialty is milkshakes with a little extra.  The husband enjoyed a Jamocho; chocolate ice cream, coffee ice cream and kahlua.  I had a Jacoco; coconut ice cream, chocolate ice cream and kahlua.  The owner assured us that there was not enough booze in the shakes to give us a buzz, just enough to add flavor.  Good enough for us.

We drove back towards the condo sucking on those rich, creamy shakes.  Heavenly.  And stopped at the roti truck to pick up lunch.  How to describe roti?  It’s a Caribbean thing, but has its roots in India.  So, I guess it’s an Indian thing by way of the Caribbean.  Roti is kind of like a tortilla.  We purchased a chicken roti and a beef roti.  The filling was meat and potatoes with a…curry gravy.  That’s the only way I can think to describe it.  They were amazing.  Cooked in a converted school bus, the crowd surrounding it appeared to largely be made up of working men, the way out somewhat blocked by a man on a horse on one side and an ambulance with flashing lights on the other (though they didn’t seem in any particular hurry).  School bus roti.  One of the best meals we had on the island.

After eating lunch we headed to the beach.  Because what else would we do?

That afternoon we selected Coki Beach, which was less than a five minute drive from our condo.  We paid a local guy $5 to park in the lot (we think he may have been some random guy taking money in a free lot, perhaps to fund the beer dangling lazily from one hand, but who were we to argue?  It was $5…not $20) and gathered our things. 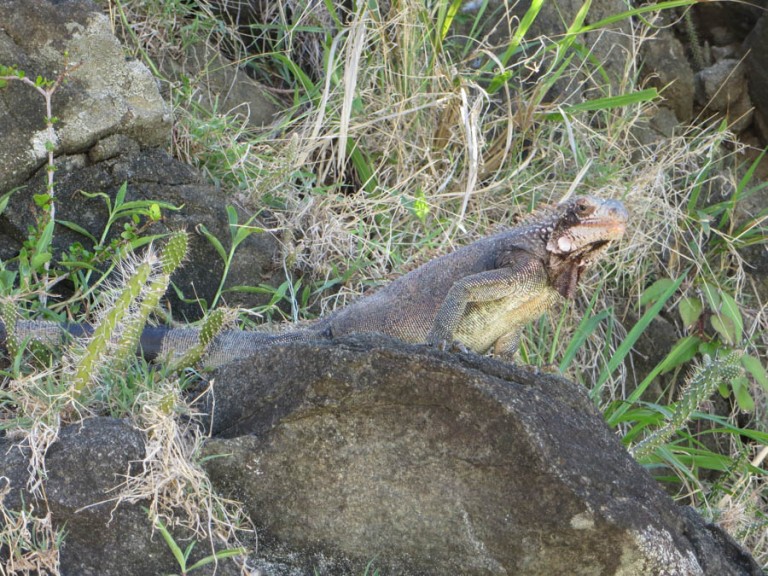 Coki had a very, very different feel from Magen’s.  Lots of locals.  Lots of tourists.  Small beach.  Free beach loungers.  Multiple bars in concession-esque stands.  And the acrid scent of pot as we made our way to the beach.  Let’s just say it had a local-casual feel.  But not in an unwelcoming way.

We found a couple of lounge chairs under a shade tree, exchanged some casual conversation with some other tourists, strapped on our snorkel gear and headed into the water.  Coki was the best snorkeling that we experienced on the island.

After a good amount of time in the water we had worked up a thirst.  Unfortunately for us, I didn’t bring any cash and the husband’s stash was running low.  I had rum punch cravin’s on a beer budget.  Oh, well.  It was hot.  Beer worked. 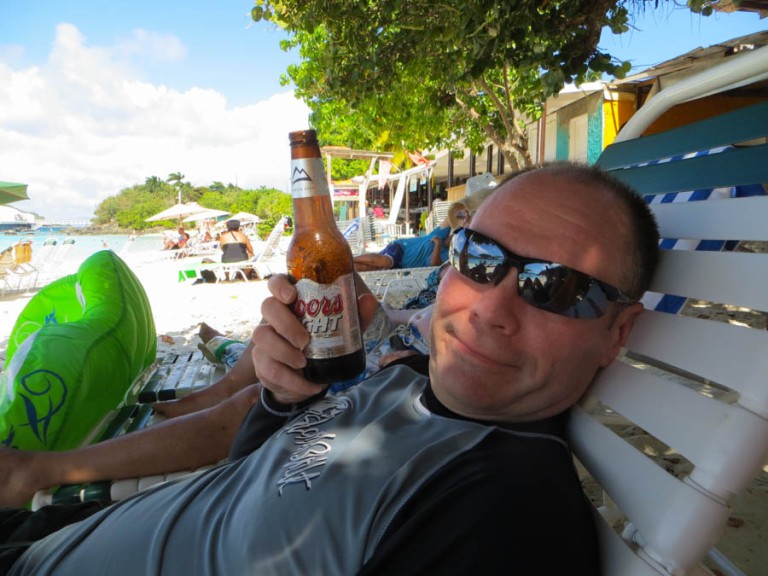 We eventually peeled ourselves away from Coki and headed back to the condo for some pool time.  That was the afternoon of the cannonball contest.  I had taken my point-n-shoot to the pool and we were goofing around when the husband launched himself off the side of the pool into the perfect cannonball. 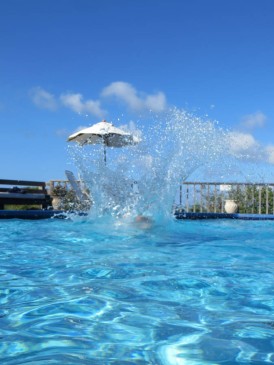 Delightful.  Completely delightful.  I invited him to do it again and took photos, one of which I shared in a recent Weekly Photo Challenge.  Not to be overdone, I stepped up to the challenge.

Hear that husband?  Cannonball throw-down!!  There will be a next time!!

After the pool we cleaned up and headed into town to pick up a pizza for dinner.  While we waited we sat on stools overlooking a small marina, sipping on Painkillers.  Rum, pineapple juice, cream of coconut and OJ with fresh nutmeg grated on the top.  They’re amazing.  Almost as good as Lime ‘n Da Coconut.

We took our pizza back to the condo and ate it sitting out on the lanai.  Afterwards, I was prepared to kick back and call it a day.  But, the husband had other plans.  He had been eyeing the Margaritaville that shared our bay since we had arrived.  Even on Cinco it appeared empty, but he convinced me to go over there to see what was going on.  We followed a path along the shore near our condo complex, waded across a shallow inlet and approached Jimmy Buffet-land.

There was no one there.

Okay, maybe there was a dozen people.  Maybe two dozen.  If they were lucky.  On Cinco!

Now, we’ve been to a couple of Margaritavilles…one in Vegas, another on Grand Turk.  I wasn’t hugely impressed with either.  I make a really good margarita.  Margaritaville?  Not so much.  But, when in Rome…. 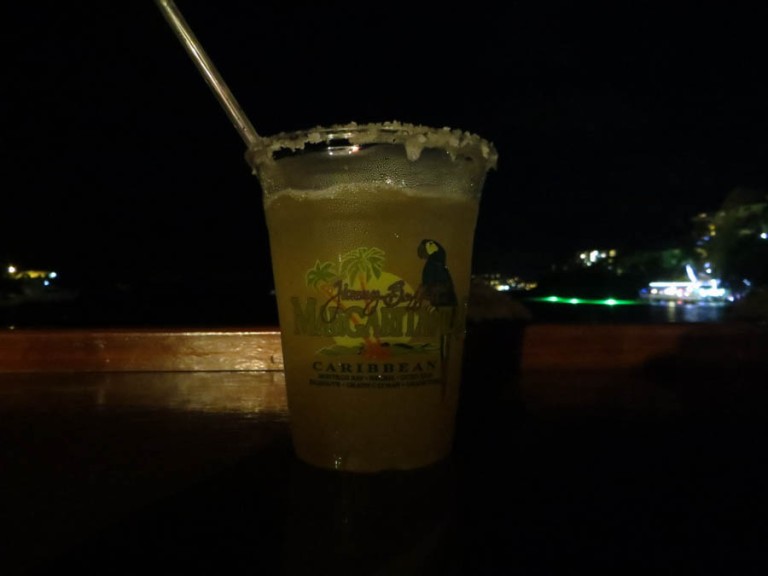 While the husband ordered drinks I selected a place to sit on the empty patio.  He joined me and we settled in.  Sure, it would have been fun if there had been a crowd, but I have to admit…sitting on a darkened patio in 80 degree weather with a gentle breeze whispering through tall palms above us and waves gently lapping on the beach in front of us was not a bad gig.

Should I confess that we stopped at the condo complex bar for a final-final?