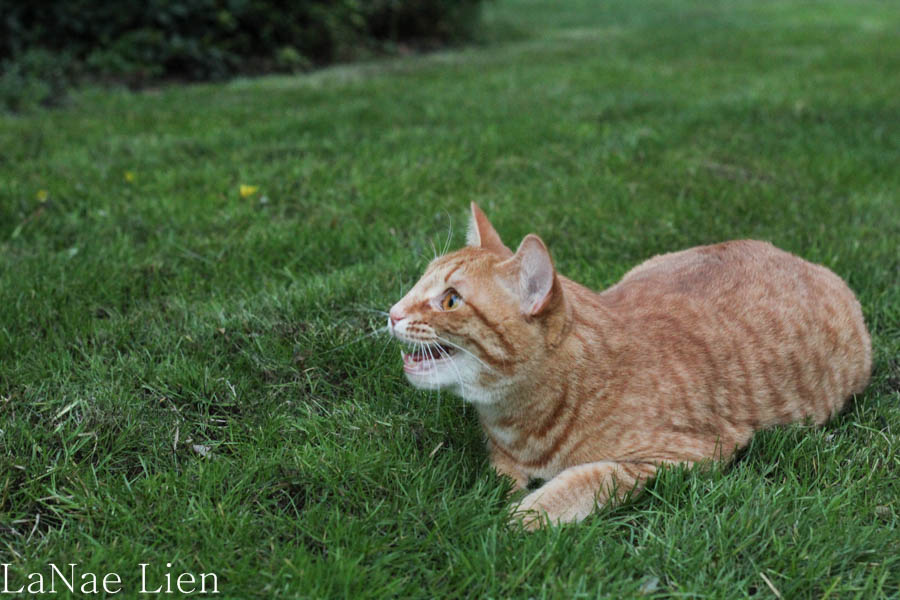 At one time we considered adding “Maximus” to his name.  Colby Jack Maximus Lien.  Because he looks a bit like a Maximus, doesn’t he?  He’s a gloriously handsome cat…long, lean body, big orange eyes.  Regal.  And big.  Thus, Maximus.  That idea got dropped because, well, he ain’t no Gladiator.

Since his adoption Colby Jack has killed three mice on his own.  He roughed them up a bit, but they remained recognizable.  He did not eat them and he did not leave them on the mat as an offering to his people.  In other words, there seemed to be a general lack of enthusiasm surrounding the hunt.  Last week he had to have help finishing a mouse off (thanks, husband).  A couple of mornings ago the husband unlocked the cat door (he sleeps in the garage.  The cat…not the husband) and reported that Colby would not come it.  It appeared he was on the hunt.  I finished getting ready and, when I came downstairs, CJ was in the family room playing with Jonathan.  I inquired about the mouse.  It appeared that the mouse had gotten away.  CJack was surfer-dude cool about it.  No big deal.  Another mouse, another day.

I find myself dwelling on the fact that big orange seems to lack the hunting gene because it boggles my mind.  How can a cat be an unsuccessful hunter?

The entire experience is also unbelievable because our previous cat, Slater, was sometimes referred to as “Stone Cold Killer.”  It was an accurate description, though somewhat surprising because she was such a snuggly lover.  But, despite her snuggly tendencies, that cat slaughtered anything that moved in the garage, sometimes splattering blood and entrails on the floor in the process.  Of course, she also had a tendency to eat said kills (except for the shrews…apparently they’re not good eats) and then come into the house and yack mouse remnants on the floor.  And she was not a seasonal killer.  She took care of that business year-round.  So, I was really excited to have CJ move in as the garage had been left unattended for 9 months.  I assumed that carcasses of mice and shrew would appear almost immediately on the door mat.  I was wrong.  The husband and I reassured each other, suggesting that he needed time to settle in.  After a while we began asking ourselves how long it takes a cat to settle in.  Needless to say, he’s been a bit of a disappointment in that arena and I have considered setting traps in the garage.  The only thing that has prevented me is the fear that a tender cat nose or paw might suffer as a result.

So, I went from a petite grey cat with a gladiator spirit, to a gladiator-looking cat with no gladiator spirit.  Who also doesn’t like to snuggle.  Which might cause one to (occasionally) wonder about his worth.  Good thing he’s a big handsome friendly man. 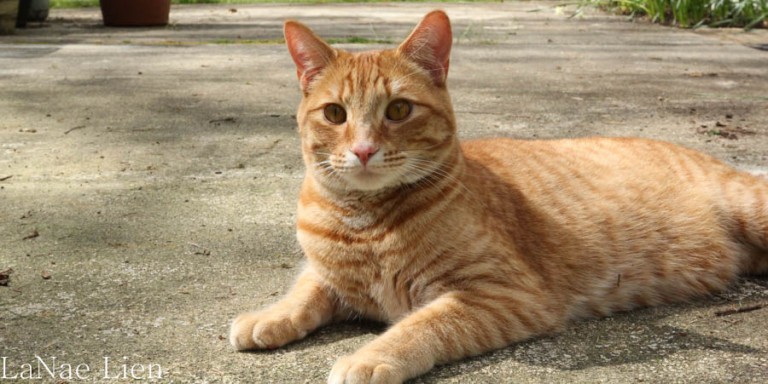 9 thoughts on “The Cat the Hunting Gene Skipped”