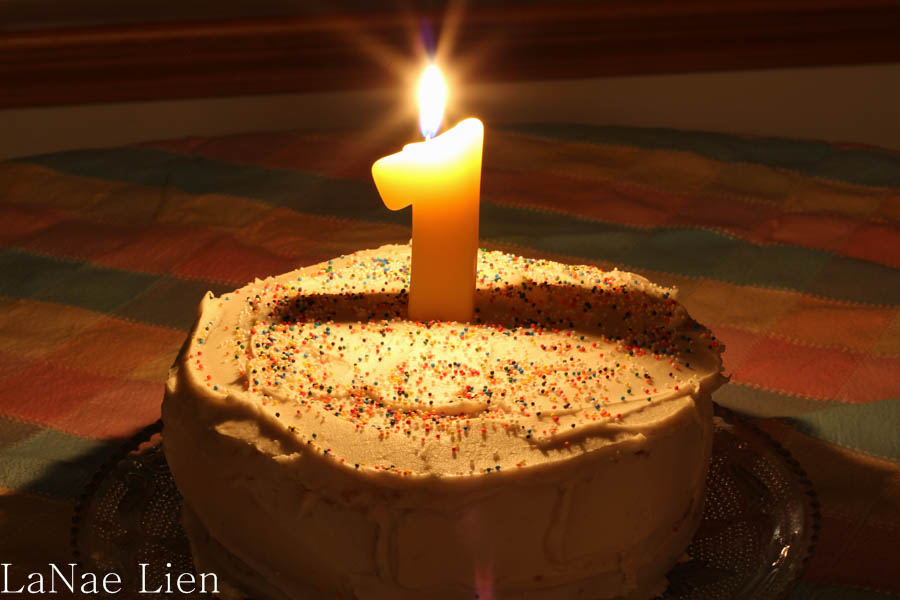 Can you believe it’s been a whole year?  Wishing My Life Away is one year old today!  How, exactly, does one celebrate a one year blogiversary?  Well, if you’re like me it involves a little bit of cake:

And a celebratory song:

Because that’s how I roll. Actually, the husband and I celebrated a couple of days ago because I have other plans tonight.

So, let’s celebrate the big anniversary by taking a walk down memory lane, shall we?

The blog was originally called Cook, Drink, Hike. And it all started because….well, I can’t quite remember. So, let’s step back to one of my first entries, titled, “Why Blog Now.” Hmmm…personal angst. I had read one too many books about chefs pursuing their passion and was feeling discontent that I didn’t have one of my own. A passion.  Not a chef.

Interesting. Some of you may have already picked up on a passion of mine that has moved to the foreground over the last few months and, interestingly enough, it’s not cooking. Actually, until I just re-read that post I hadn’t even realized that I’ve found the passion I was looking for…quite by accident. Dang! I deserve another cake!  Maybe some confetti!

I do know that my initial assumption was that this would primarily be a cooking blog. There are so many beautiful cooking blogs out there. I stalk so many of them regularly (my Pinterest account bears witness to this). I did post a number of recipes in the beginning. But, here’s the problem with food blogging: I cook to eat, not to take pictures of what I’m cooking. There are times when I’m cooking that I think, “Ohhhh..this is good and pretty food…I should blog about this…” But, that would require putting down the spoon or the spatula or the rolling pin and picking up the camera. It also turns out that food photography isn’t as easy as it looks. What I really need, in order to be a successful food blogger, is someone to take photos while I cook and then to style and photograph the food while the husband and I are eating. Then I could be a food blogger.

Early in the life of the blog I started participating in WordPress’ Weekly Photo Challenge. It was all about me and my little Canon point-n-shoot (which, I will say, still has a place in my life as it really takes good photos). As early as May 2015 recipe posts had dropped by the wayside. I was still cooking, drinking and hiking, but I found that the only one that I posted about regularly was hiking. In May I also purchased my first DSLR camera…and life as I knew it changed.  Though I didn’t immediately realize it.

Come June I signed up for WordPress’ “Blogging 101” course. Mostly to try to figure out how to put together a somewhat attractive looking blog (I’m not particularly technologically inclined…or interested). I changed my theme, and, even more importantly, changed my name. Not me, personally. The blog’s name. Blogging 101 allowed me to step back and assess where I’d started and where I’d come from. It was pretty clear that the name Cook, Drink, Hike didn’t quite capture the essence of this little blog of mine. So, I changed it to Wishing My Life Away, and explained why here.

In July I took a four week online photography class called Mastering Manual Exposure.  Allow me to share a secret with you….I’ve not yet mastered manual exposure.  But, I have come a long way in less than a year.  During and after that class I spent a lot more time with my camera.  Studying, shooting, occasionally banging my head against a wall.  And having a great old time of it.  That same month I reached 101 followers, which was a momentous and exciting event.  I’ve since accumulated 76 additional followers.  Heady stuff! The joys of July gave way to my 100th blog in August.  Today’s blog is number 243.  And my parents and the husband should probably get some kind of award for being the only ones to have read each and every post.  Though, I’m sure there are others of you who, today, hang upon my every word.

The big news in September was the addition of a family member…a cat named cheese.  The next few months continued pretty much status quo.  Not boring, just status quo.  However, behind the scenes my obsession with photography continued.  I captured the obsession through the photos posted in the blog, and I talked about it briefly here and there, but it wasn’t until January of this year that I began to share about my triumphs and my struggles. Since then I’ve talked about balancing technical growth with heart growth, shared my frustration over a flock of birds and how I tamed that flock of birds a couple of weeks later, tried to identify who I am and learned how to ask better questions.

Which brings us to the one year blogiversary.  Where do I go from here?  What are my goals?  Has blogging lived up to its hype?  Those are good questions.

First, where do I go from here?  Well, that’s easy.  Tomorrow is day 366.  It’s also Wednesday, which means I’ll be posting a photo for Wordless Wednesday…and we carry on.  Occasionally the blog feels burdensome.  And, I’m a little too obsessed with the statistics page that tells me how many views, likes and visitors I’ve received on a given day.  I find myself envious of those who can post just a regular old post, only to generate 30 likes in just a few hours. I might be able to generate that kind of traffic.  If I really tried.  But, that ties into the second question.  My goal has always been to give myself an outlet.  That has not changed.  I attempt to entertain you along the way.  My goals currently include a plan to continue documenting the growth of my photographic journey.  To share with you our outdoor adventures and our vacations.  To continue participation in the Weekly Photo Challenge.  And, I’ve grown rather fond of Wordless Wednesday.  I find myself going out of my way to shoot the “perfect” photo to share with you each week.

The final question:  has blogging lived up to its hype?  Everyone has a blog, right?  We’re all clamoring for space in the universe to say what we mean and mean what we say.  When I first started this blog I did have some grandiose ideas of attracting thousands of followers in short order.  It was a hope.  I think, in that way, the idea of blogging can lead us to think that our blog will somehow be more compelling, more captivating than all of the other zillions of blogs out there.  That we will rise to the surface like rich cream and that the world will hang upon our every word.  Not to burst that bubble, but WordPress (that’s my blogging platform) users alone produce 54.2 million new posts per month.  Now, that’s not just regular schmoes like me.  That includes users like TED, CNN, NFL and UPS.  But, still!!

So, no, blogging has not brought me wealth (not that I expected it to) or masses of attention (not that I wanted it to…I don’t think).  But, I’ve made a few blogger friends along the way (Lisa over at graydaysandcoffee, Karen at Salal Studios,  Jodi at Life In Between, Gretchen at Writing Down the Story, all whom I admire greatly), I’ve found a passion that I will pursue for the rest of my life and I’ve enjoyed my first year.  I hope you have, too.

7 thoughts on “One Year Blogiversary!”