Colby Jack has been laying in front of the front door off-and-on for some time.  We prefer that he remain indoors.  It’s just safer for him.  There are coyotes and raccoon out thar. Plus other cats.  Plus he still has some occasional weakness in that hip he had surgery on. Or so it would seem.  It also seems that the limp crops up when he’s feeling dramatic. Limp on demand.  Very suspicious.  He seems content to remain indoors, for the most part.  But, sometimes he gets whiny about it.

Yesterday was a beautifully sunny day, so we indulged him.

We expected him to strut out the door full of confidence.  Not so much.  Now, remember, CJ spent some time on the streets.  When rescued he had just been hit by a car.  But, one would assume that he’d have some street smarts and, given how he has been demanding to go outside….  Right?

Instead, he was, hesitant.

He pretty much stuck to the large flower bed along the front of the house. 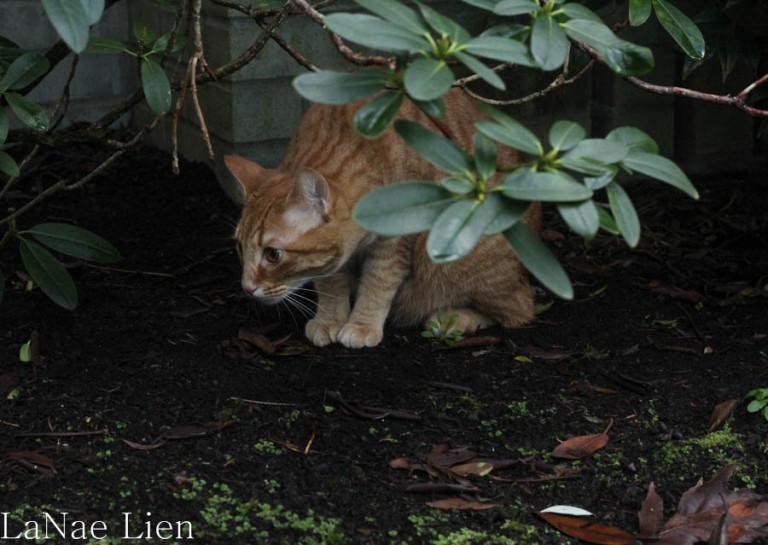 After a bit, we got tired of watching him and wandered a bit further out to examine the crocuses (opening in the sunshine) and the apple tree (we think it may have bugs) and talking about what kind of vegetables we want to plant this summer.

The cat slowly wandered into the yard.  Slowly.  Cautiously.  He came up to me to check in and I stroked his side, reassuring him that he is a big, brave cat.

He returned to the porch and appeared ready to go back in the house….

But, then he changed his mind and decided he wanted to walk the brick ledge along the front windows.  He got to the end and tried to turn around, but that large orange caboose couldn’t make the turn on the narrow ledge, so he instead backed that orange truck up. We laughed at him and did not offer to assist.

Then the heat pump kicked on.  Big man startled and that was the end of the outside adventure.

Today he thought he wanted to go out again.  Until I picked him up, carried him out on the front porch and let the rain hit his ears and face.  He struggled in my arms, I put him down and he quickly returned to the house.  Not such an outdoor cat.

Our goal is to get him comfortable enough so that, should he get out he won’t lose his mind and forget where he lives, and so that he can hang out on the patio with us on warm summer afternoons and evenings without us worrying that he will lose his mind and run off.

7 thoughts on “Big Orange Goes Outside”