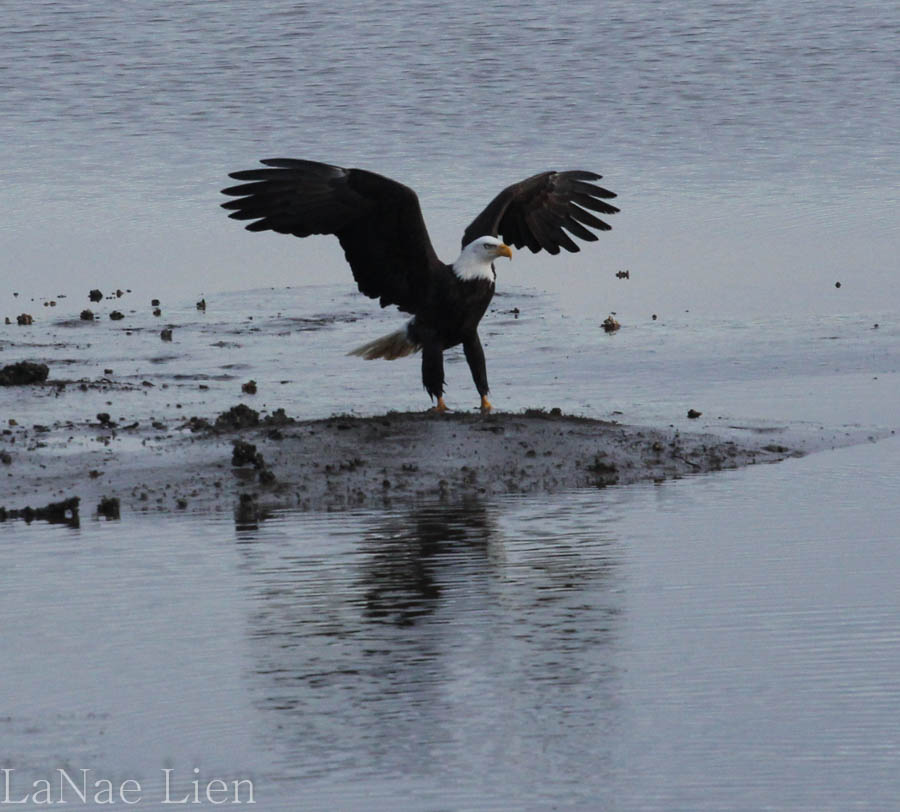 Last Saturday morning I went for a walk out at Nisqually.  The husband invited me to join him in a cycling class at a gym, but I was still twingey from chucking myself down the stairs on NYD, so I thought I’d better stick to something a bit more pedestrian.  Boy, am I glad I went pedestrian.  For one, I saw eagles.  For two, I proceeded to come home and take Christmas decor down and finally had to stop a little before 3 because I found myself groaning each time I stooped over.  The stooper is taking longer to heal than I would like. This over 40 thing occasionally sucks. What happens when I’m 50? 60? 🙂

Eagles are not an uncommon site on the Delta in the winter.  However, they’re usually in far away trees, or flying far away or just generally too far away for me to capture with my 70-200.  I do sometimes suffer from lens envy when I pass people with gigantic lenses.  But, I do pretty well with what I have…and I cringe to think of how much a huge lens costs, considering how much the used 70-200 was.

I was out there just a little after 8.  It was 35 degrees.  I had hand warmers in my mittens and a sock hat on my head.  It was not raining nor was it snowing and there was no frost on the ground.  That makes for a good morning.  Oh, and the wind wasn’t blowing.  A very good morning. 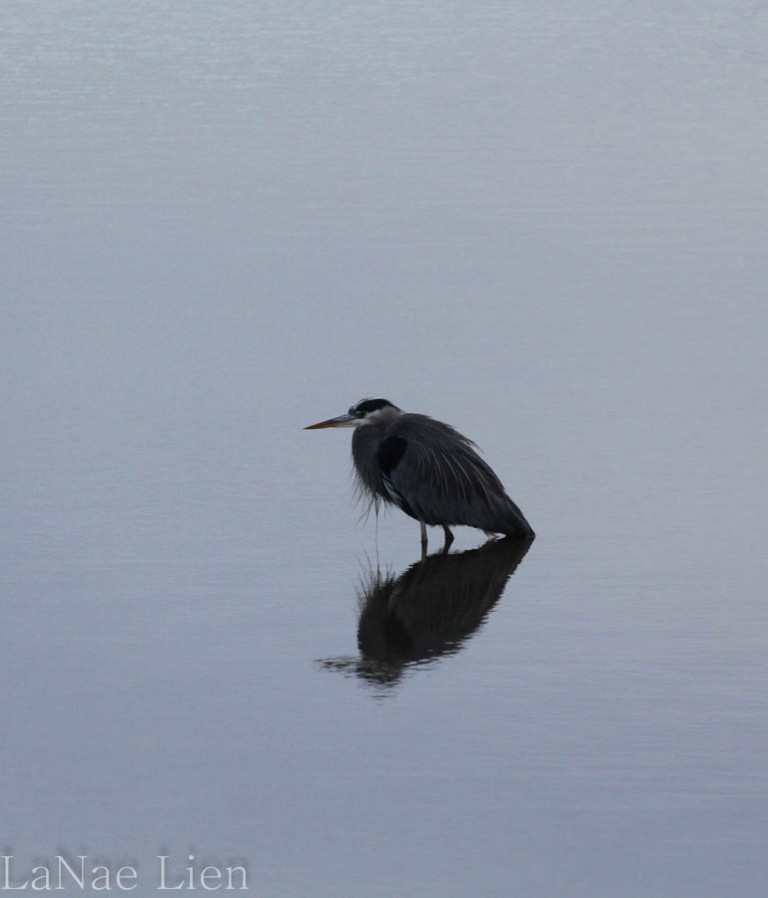 I headed down the boardwalk, stopping to admire ducks, a heron and other assorted birds on the way out.  I say “other assorted” to lead you to believe that there were just too many different kinds for me to mention them all.  Which is probably true.  But, the other side of that coin is the fact that I am unable to identify very many birds.  Someday I would like to change that.

Work really gets in the way of all of the hobbies I would like to cultivate.

I walked along the gravel path that sits atop what was once part of the dike that kept the water out and allowed for cultivation of this area.  I always admire the two large white barns still present in the refuge, last remnants of the once-prosperous farm that existed here.  I then stepped onto my favorite part of the refuge:  the boardwalk built over the tidal flats themselves. 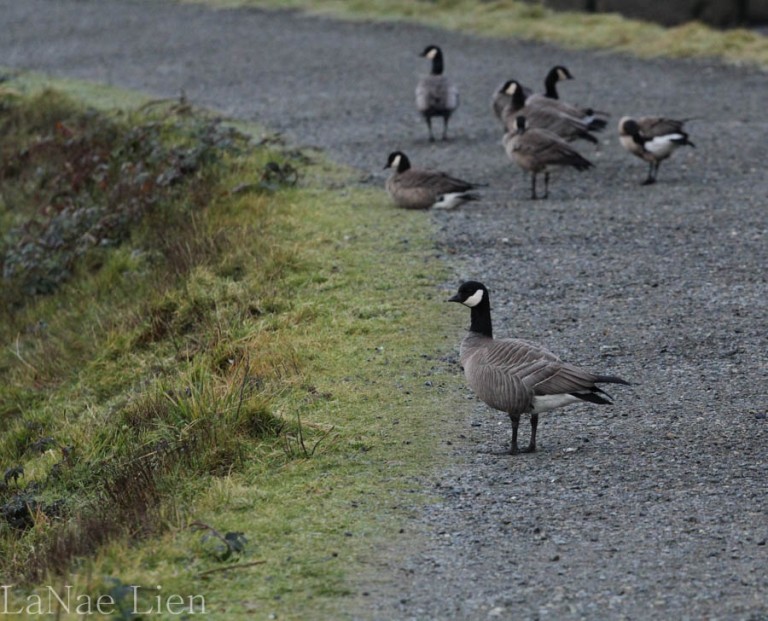 I can pretty much always count on seeing herons, no matter the tide.  And other little twittery birds.  And seagulls.  Which I don’t count because I don’t like seagulls.

But, as I got out further on the boardwalk I found myself squinting at a mud flat ahead of me and to my right.  Was that an…eagle?  I pulled up my camera and used the zoom as binoculars.  Yes!  Eagle!  I picked up the pace.  When I got close enough to attempt some pictures I realized that, not too far from the first, was a second.  Whoo-hoo!  I only got a few shots of the first before he took off.

The second treated me to a show. 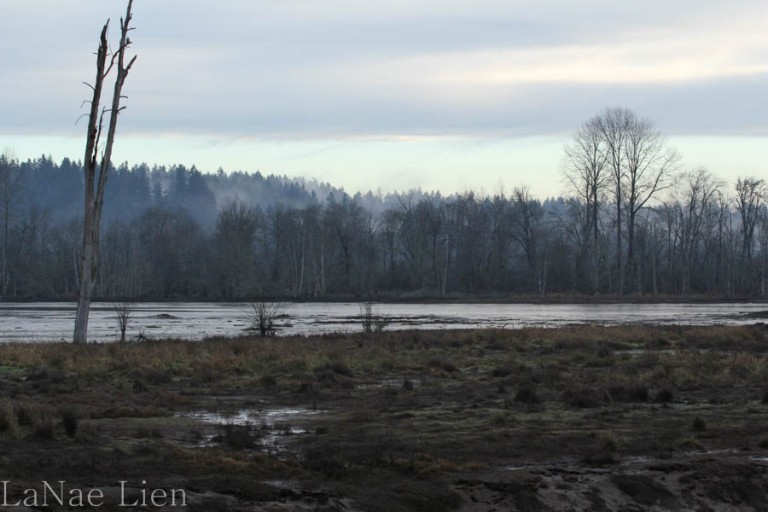 After a few shots I realized that there was a seagull in relatively close proximity to the eagle.  The gull was squawking and hopping closer…and closer.  The eagle turned his head slightly and glared at the gull.  Undaunted, the gull continued to hop around.  Disgusted, the eagle lifted off the ground in a lazy circle and came down a ways away.  The gull got the point.  I got eagle in flight photos.

Apparently the first place he landed was not satisfactory as he again flew, this time in a tighter circle, before landing again.  He didn’t stay long and when he took to the air again he was headed straight towards me.  I shot madly, hoping beyond hope that I would get a few good pictures. 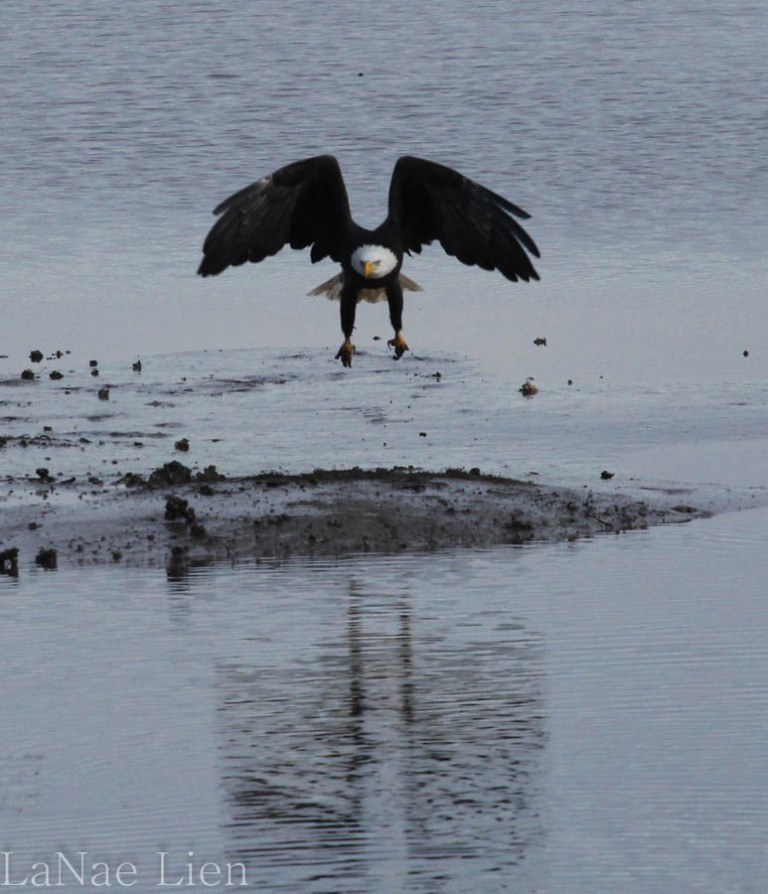 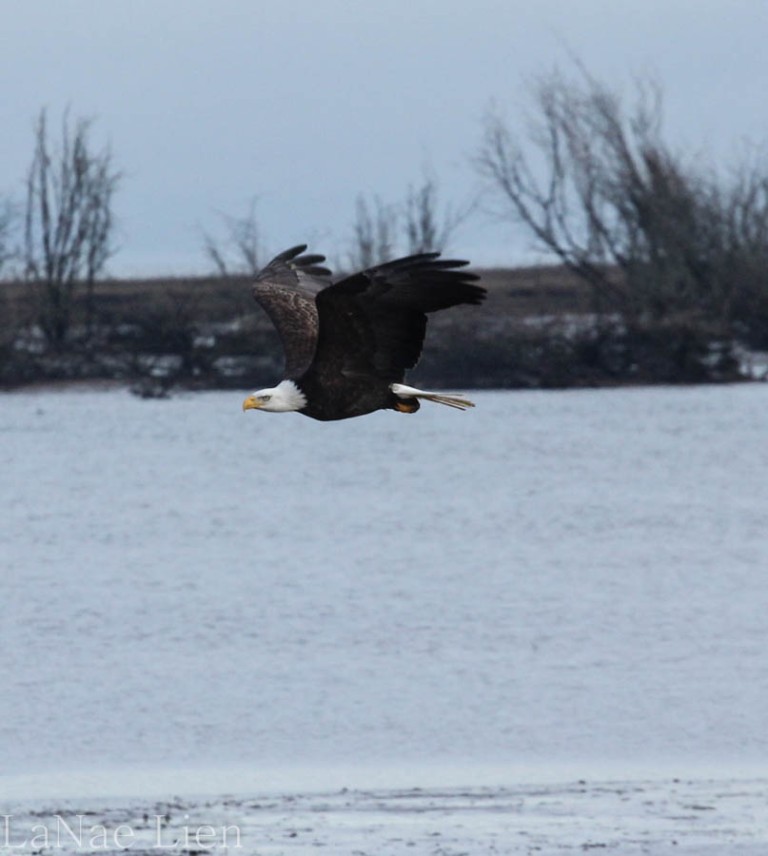 14 thoughts on “An Eagle in Winter”