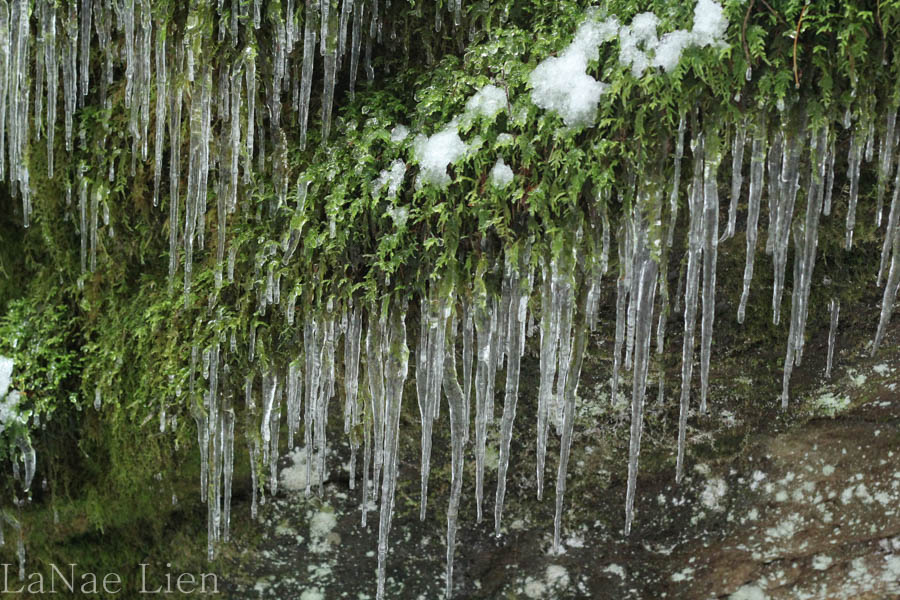 The mountains have been getting snow, which means we’ve been getting rain.  Lots and lots of rain.  Which makes it essential, when the rain pauses for a day or so, to get out. Lest one go crazy.  The day after Christmas dawned…well, not exactly bright and clear…but, overcast with only a touch of fog and no rain in the forecast.  That’s all we needed to hear.  We packed our packs and a lunch and headed up Hood Canal towards the Southeastern corner of Olympic National Park, near Lake Cushman.

We have to be a bit selective about our winter hikes.  It gets light late and dark early and we don’t really want to get caught out on a trail after dark. Though we have headlamps, so I don’t know if it would really be that big of a deal.  Nonetheless, we chose this one because it’s relatively close to home and it’s an easy 6 miles.

It’s always fun packing lunches for the trail during the holiday season. Sandwiches are paired with party mix and sugar cookies.  How can you go wrong with that?

Anyways, we arrived at the trail head of Big Creek a little after 10 am. There were three other cars in the lot.  For some reason, even knowing that the snow level had dropped to 500 feet shortly before Christmas, I found myself surprised to see spotty snow on the ground as we drove past the lake and towards the park.  It didn’t occur to me that we would be seeing much more snow within the next hour. 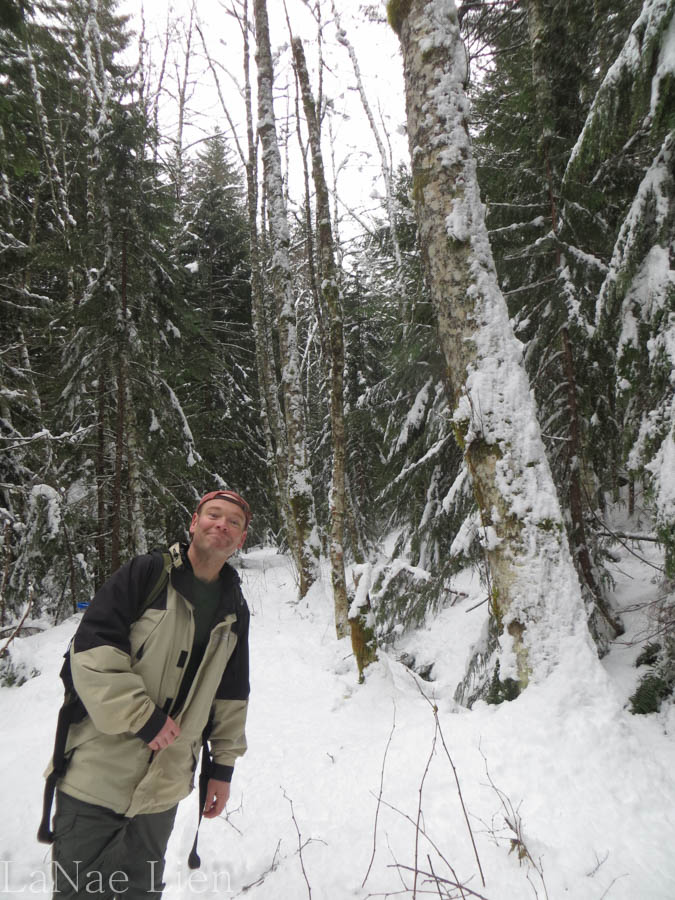 We headed up the trail.  You start in the valley next to the creek and gradually climb so that, eventually, the creek (one of a number we would see and hear) crashes below you.  The total gain is only about 900 feet and the highest point of the trail is 1870 feet, but we quickly found ourselves hitting crunchy, icy snow. We continued on. 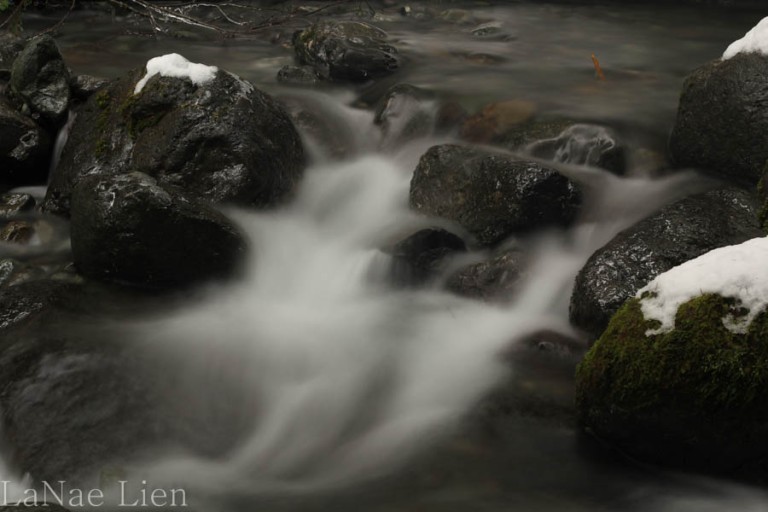 I was pretty weighed down as I had decided to bring both lenses (though I only used the 50mm) as well as the tripod (its first hike.  We’re going to try to figure out some way to attach it to the bottom of my pack as it was impossible to cram it back in after I had it out, which meant the husband played caddy and carried it for me).  I also had the little point-n-shoot for wide angles.  And my newest treasures…a 6 stop B+W high density filter with a brass step up ring.  When I say that it’s almost with the same intensity with which Ralphie proclaimed that he wanted an official Red Ryder, carbine action, two-hundred shot range model air rifle.

For those that don’t know (and I didn’t know until my friend, Karen, over at Salal Studio  educated me), HD filters, at their simplest, are like sunglasses for your lens.  It allows you to drop your shutter speed (which is why the tripod is necessary) so that you can get those silky, beautiful water pictures.  I’m sure they have other uses, too, which I’ll explore after getting past my water obsession.  If I ever get past it.

Anyways, I was really, really excited to get to try it out on the trail.  We’ve done this hike before, so I knew that, though we would not have sweeping panoramic views, we would be crossing a number of streams.

The higher we climbed the deeper the snow got.  We estimated it to be, at it’s deepest, about 14 inches.  Lucky for us, other hikers had blazed the trail.  So, though it was slower going than bare ground, it wasn’t bad. 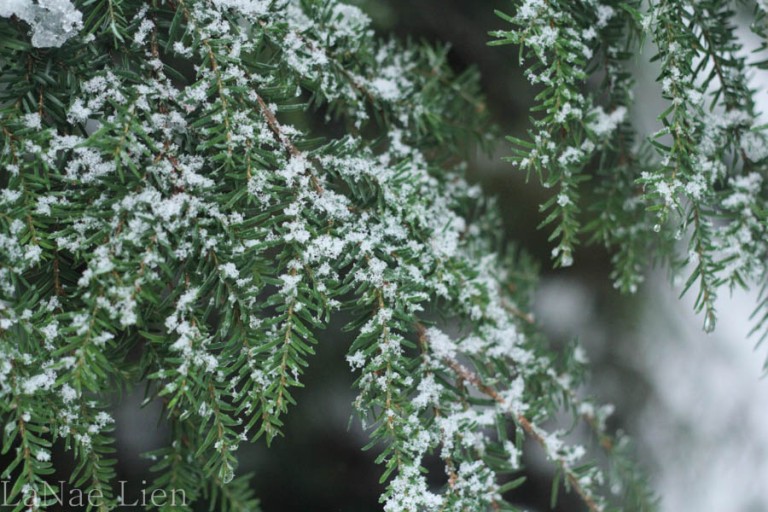 We reached the first stream of decent size and I pulled off my mittens, pulled out the tripod and set up.

My fingers are always cold in gloves, so I bought myself a pair of fleecy lined mittens.  The problem with mittens is that by wearing them I essentially reduce myself to a helpless child.  I lose all ability to perform fine motor skills.  Which means the mittens get pulled off with each photograph I want to take.  You would think this would only make me colder.  Nope.  Because the secret to mittens is to tuck a disposable hand warmer packet into each one.  Ah-ha! Who’s a genius now? 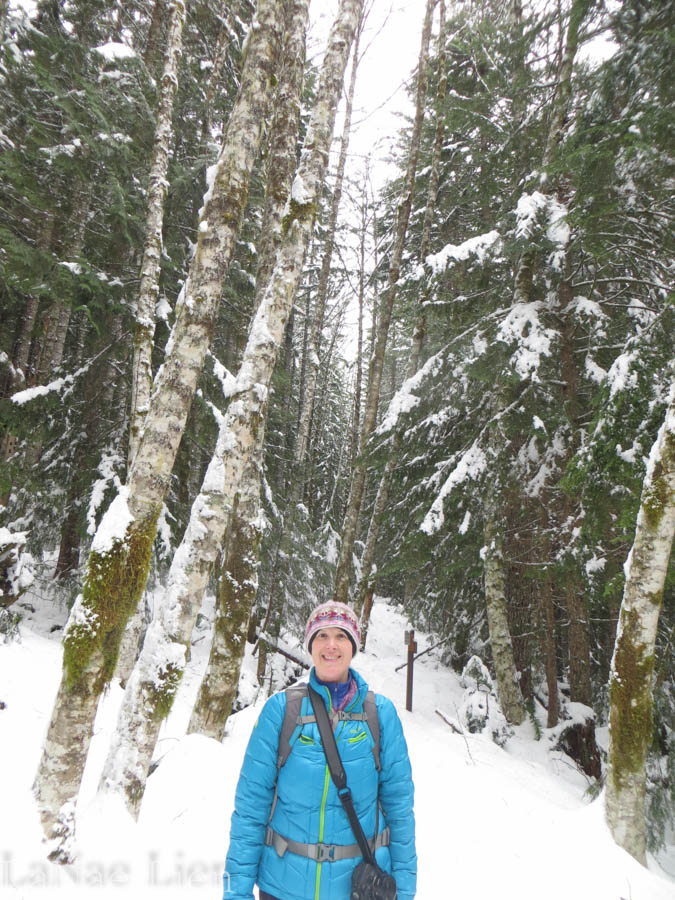 Anyways, I get myself set up, adjust my settings, knock the shutter speed down, take the photo using the timer and……the heavens opened and the angels sang.  Even on the itty bitty display I could see the water was silky, the rocks dark, the snow white.  I played with the speed and the aperture, taking a photos at a wide range of settings.

We moved to the next stream and I set up again, surrounded by snow and rushing water.  My fingers became numb, my body cooled, my belly growled.  I looked at the very patient husband and suggested lunch.  He eagerly pulled the bag out of the pack and I ate with one hand and took pictures with the other, all the while chattering excitedly at him.

And then it began to snow.

And it was a little magical.

By that time we were good and chilled, so I packed up the tripod and the filter for good.  We headed on down the trail, admiring the views, breathing in the crisp air, marveling at the snow.  The cherry on top?  The hot toddy stop at Alderbrook Lodge and Resort on the way home.  Cozy lounge, warm drink, and a beautiful view.  It was a great way to wrap up a great day.

11 thoughts on “An Unexpectedly Snowy Hike”