This afternoon the husband and I went out to Kennedy Creek Salmon Trail to watch the salmon do their thing.  It’s another drippy day, but we managed to get out between showers (for the most part.  We did get a little wet).

Kennedy Creek is home to four of the seven Pacific salmon species:  chum and coho salmon and steelhead and cutthroat trout.  These fish hatch in freshwater streams and migrate to the ocean to mature.  After a few years they return to fresh water to spawn.

Salmon spawn in the fall and steelhead and cutthroat trout spawn in the spring.  Most species live in the stream for a year or more after hatching, but chum salmon spend very little time in fresh water.  Chum salmon is the most common species in Kennedy Creek.

Kennedy Creek can be a hive of activity at spawning time.  The chum work their way upstream, sometime through incredibly shallow water, to find spawning sites and mates.  It’s a tough battle, made obvious by the number of carcasses littering the stream bed.  Interestingly, chum salmon die after spawning.  We imagine that the creek bed is a raccoon party-spot after all of the people go home. 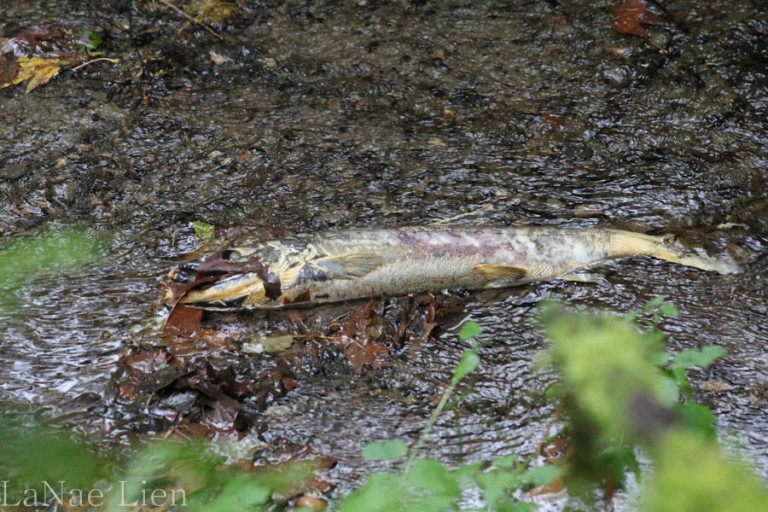 The spawning process is…well, quite the process.  First, the female noses the stream bottom, searching for a place with clean gravel and ample water flow to deposit her eggs.

Males and females bite and chase each other as they compete for spawning opportunities.  To prepare for egg laying, the female turns on her side and flexes her body vigorously to dig a depression in the gravel.  She will dig several impressions in one area.

While the female digs, the male courts her by vibrating his body slightly as he swims alongside her and crossing over, in which he swims from side to side over her back.

After the eggs have been laid the females stay in position, guarding the eggs, until they die.  The male moves on in search of other females until he, too, dies.  The average lifespan of a chum salmon is 3-4 years.

The eggs will hatch in about 4 months.  The babies will immediately head for the ocean where they’ll remain until it’s time to return to Kennedy Creek to spawn.