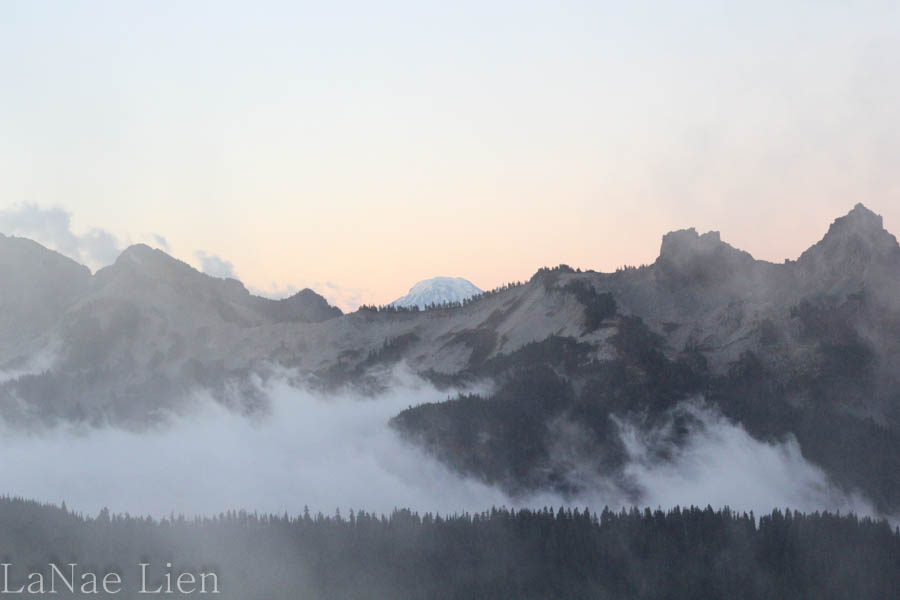 After hiking at Paradise and watching the sunset at Paradise it was time for sunrise.  The husband opted out.  It was probably for the best.  Sometimes I’m a woman possessed when I have my camera in hand and a mission on my mind.  I can be boring to him who waits for me, and I sometimes feel pressured (this is self-induced pressure because I feel badly that he’s having to wait for me) to go faster than I would like. 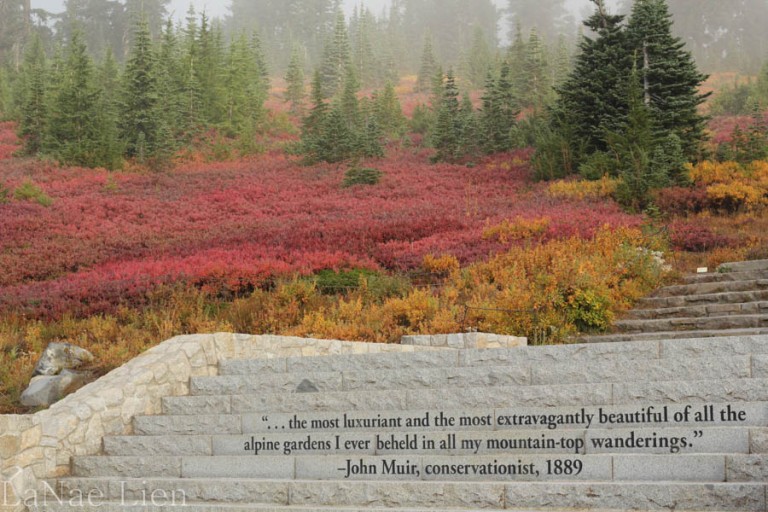 I rolled out of bed at around 5:45.  Sun was set to rise at 6:40.  I tossed on jeans, hat, fleece.  Grabbed a Lara Bar and my camera and headed out.  I stopped by the front desk and grabbed the trail map for the vicinity right around the lodge.  I had a spot in mind:  the top of Alta Vista trail.  I confirmed where the trail started and set out…in the fog.  At the lodge itself there wasn’t a lot of fog, but as the trail climbed the fog thickened.  It was quiet.  Just me and the birds.  In the fog.  Which, of course, made me think of…bears.  Yes, I went there.

So as to not startle a bear I began to sing.  Problem is, Alta Vista trail starts to climb pretty quickly.  Paradise sits at 5400 feet.  That means that any gain is a bit of a puffer.  And I was going at a fairly good clip.  Singing became…difficult.  I began slapping my thigh to supplement the breathless singing.  I’m really glad I didn’t run into any people because I’m sure I was a sight.  Plus, I’m not a particularly good singer to begin with.  I am, however, happy to report that I did not see any bears. 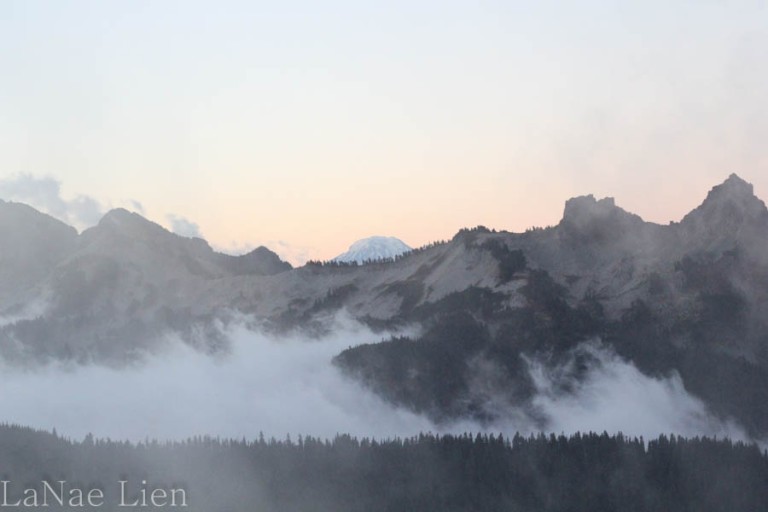 I got to the top of Alta Vista and turned…into a fog bank.  I knew that I should be seeing the Tatoosh Range in front of me. What range?  But, the fog was actually cool because it didn’t stick in one thick bank.  It moved, it swirled.  And as I stood there, it played games with the range.  It would pull back, the range would emerge with fog in the valley beneath it, the fog would move back.  It’s difficult to explain, and was difficult to capture with my camera.  So, trust me when I say that the fog was not a bad thing.

I was so busy watching the show in front of me that I kind of forgot about Rainier behind me.  Until I happened to turn around.  The exact word out of my mouth?  A soft, “Ohhhhh…..”  There she was.  The fog had briefly pulled back from her and there she was in the soft morning light in all of her majesty.  I was a bit slow on the draw (trying to change settings) and only managed to get one shot before the fog danced back across her.

My attention was split.  I’d watch the Tatoosh, I’d watch the mountain, trying to capture both in moments when the fog pulled back enough to expose them.  Then the sun started doing interesting things to my left as I stared at the Tatoosh. And was a purpley pink to my right (though that was largely blocked by trees).  I was on sensory overload.

The pictures in my mind are much better than those I captured.  Still learning.  Have lots of time.

I finally headed back down the hill when the fog socked in pretty thick and became a bit stubborn.  However, it became a pretty background for the fall colors.

I passed about a dozen men, most in groups of 2-3, on my way back down.  All obviously headed for Camp Muir with their ropes and their axes and their gear.  Camp Muir sits only a little over 4 miles above Paradise, which doesn’t sound like much in theory.  But, the elevation gain is almost 5000 feet and the final couple of miles are made up of a snow field complete with crevasses.  You know, those big old cracks that can open beneath you and cause you to tumble to your death?  Yeah.  Those crevasses.

The husband and I have toyed with the idea of hiking to Camp Muir.  It seems to sound like the best of ideas when we’re lubricated with booze after a particularly good hike up at Rainier.  Maybe.  Someday.  With training.  And the right gear. Maybe. 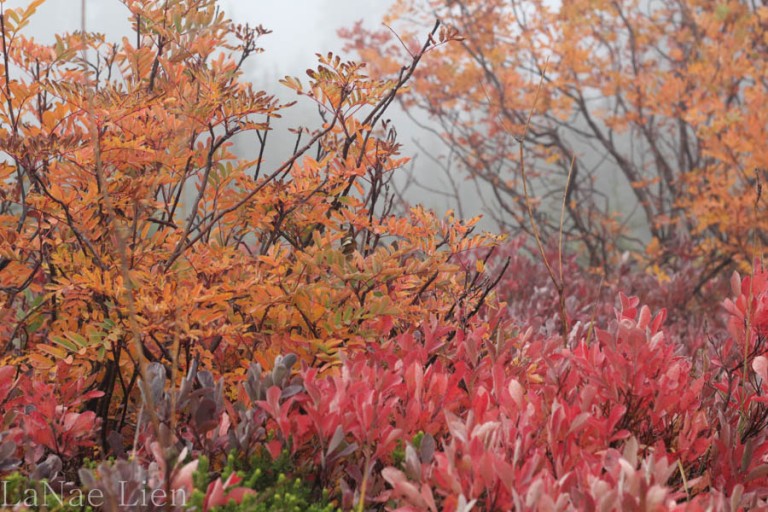 Maybe I’ll simply remain satisfied with views like this: 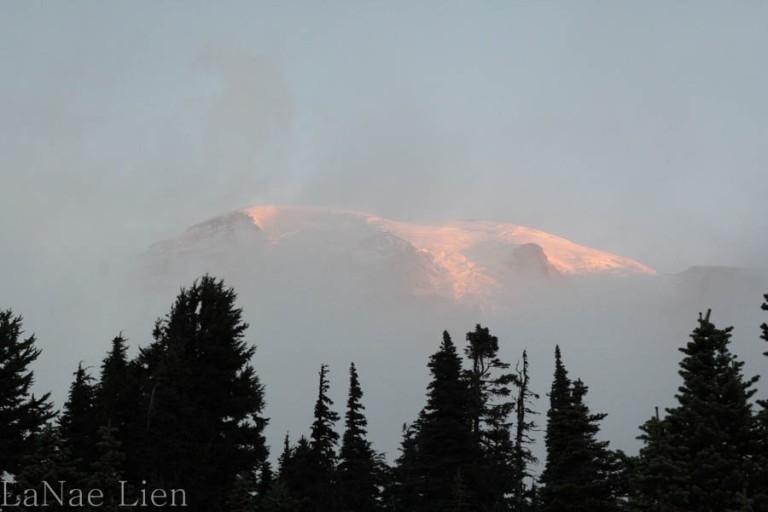 2 thoughts on “Sunrise at Paradise”