I mentioned in the Weekly Photo Challenge that we went to the husband’s family reunion on the WA coast last week.  On Friday, his two brothers and their families followed us home. One brother and fam stayed until Saturday morning, the other and his family stayed until this morning.  So, today’s post simply captures some of what we did yesterday.  It’s photo-heavy as I continue to add to my knowledge of manual exposure.  Well, it would probably be photo-heavy no matter what as that’s how I roll.

The day started on a low-key note.  Some muffins (homemade zucchini-blueberry) and fruit, conversation, and a rousing game of Jenga.  They made it over 30 levels.  I did not join in.  Jenga stresses me out.  The light was brightly tough in the breakfast nook (thus the shades on the bro-in-law), so my photography efforts were stymied a bit.

Before Jenga the kids (our niece and nephew) went out onto the property and picked blackberries.  I had told them that Aunt LaNae would make them a dessert if they picked blackberries.  They were down with that.  Later in the day I made blackberry dumplings.  I love blackberry dumplings.  They’re a dessert from my childhood.  We would pick blackberries out of the field below Grandpa and Grandma’s house and she would make blackberry dumplings for us.  Of course, we topped our dessert with fresh cream.  Like fresh-fresh.  We used to get gallon jars of whole cows milk from Mr. Faxon every week.  Mom would skim the cream off the top and store it in a glass jiffy peanut butter jar in the refrigerator.  That cream was good on everything.

After berry picking and jenga and lunch we headed to a local putt-putt course.  We played boys versus girls.  The boys were much more serious than the girls.  Strategizing each play. 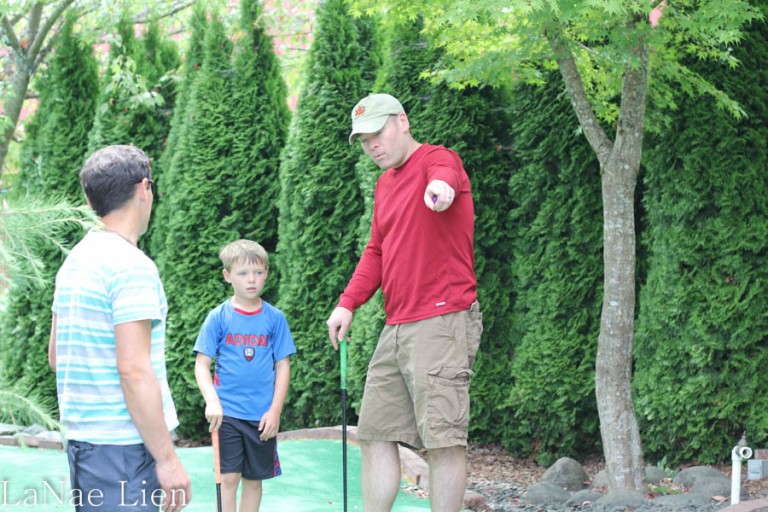 But even the boys couldn’t hold it completely together:

There was some pretty serious math and finger counting at the end to determine the winner (it was a tie…though I must confess that I don’t know that the girls scored completely accurately. Technically, the boys probably won).

After golf we headed to Tolmie Park, a park which I previously shared about here.  We wandered about the shore examining small dead crabs and dead jelly fish.

It already looks and feels like fall around here, thanks to our very warm and dry summer. Leaves should not be falling from trees this early, but they are.  However, this one does make for a nice picture:

And then the competition started.  There was a half-submerged log just off shore with a couple of branches curving over the water.  The branches became targets, rocks the weapon of choice.  I believe it was started by my brother-in-law, but somehow all became involved.

And check out the husband’s form:

The husband and the niece pulled up a log.  At first doing their own thing: 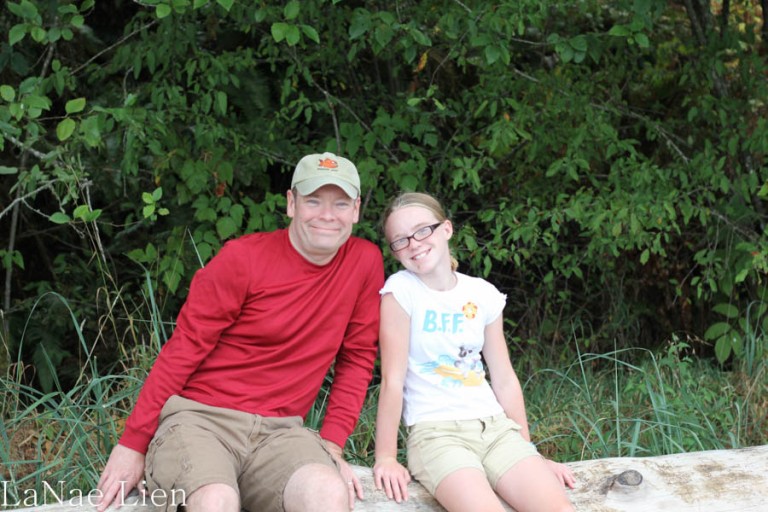 We wandered a bit more.  The day was overcast but warm.  I managed to catch everyone in one spot, but had my aperture a bit too narrow, so the nephew is a bit fuzzy.  Bummer.

We packed it in (much to the nephew’s relief.  We are, apparently very boring people.  And outside is boring.  And walking is boring.  It’s tough to be 8) and headed back to the Homestead.  Here’s where the pictures end, but the story continues. Well, a couple of more pictures from the beach, but nothing for the rest of the day.

We played some yard games (in between rain showers), hollered along with the wedding party celebrating on the property behind us, drank some homemade mojitos (the sister-in-law and I) and beers (the husband and brother-in-law).  The showers drove us indoors for our bbq’d hamburgers and homemade baked beans, but we went back out a bit later. There may have been some teasing of the 8-year-old with slugs (by his dad, not the rest of us…though we may have found it funny.  It’s tough to be from Idaho where there are no slugs).  And perhaps the niece, sister-in-law and I blazed a trail through the back of our property to see if we could see the wedding festivities (we could not).  I grew quite excited when the dj announced they were preparing to cut the cake.  I do so love cake.  We had to settle for blackberry dumplings, which was not heartbreaking. 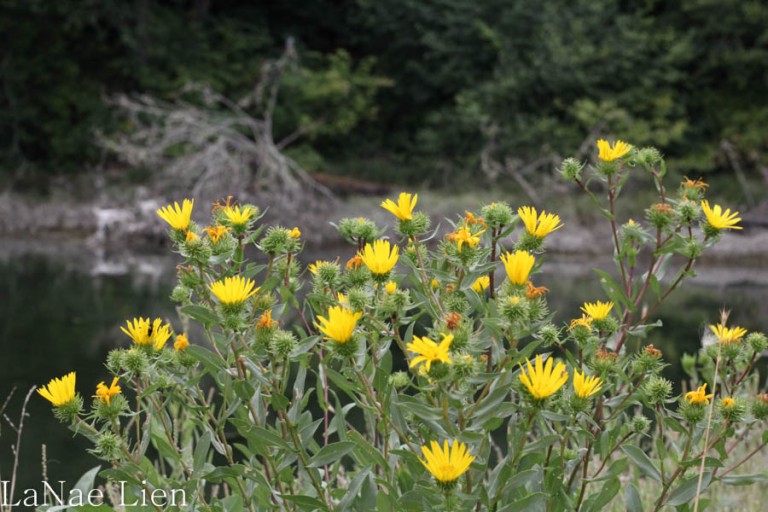 And that was our day.  A good time was had by all (well, maybe not the 8 year-old.  Though I did see him smile a few times, and he giggled, too).

2 thoughts on “Putt-Putt and the Beach”