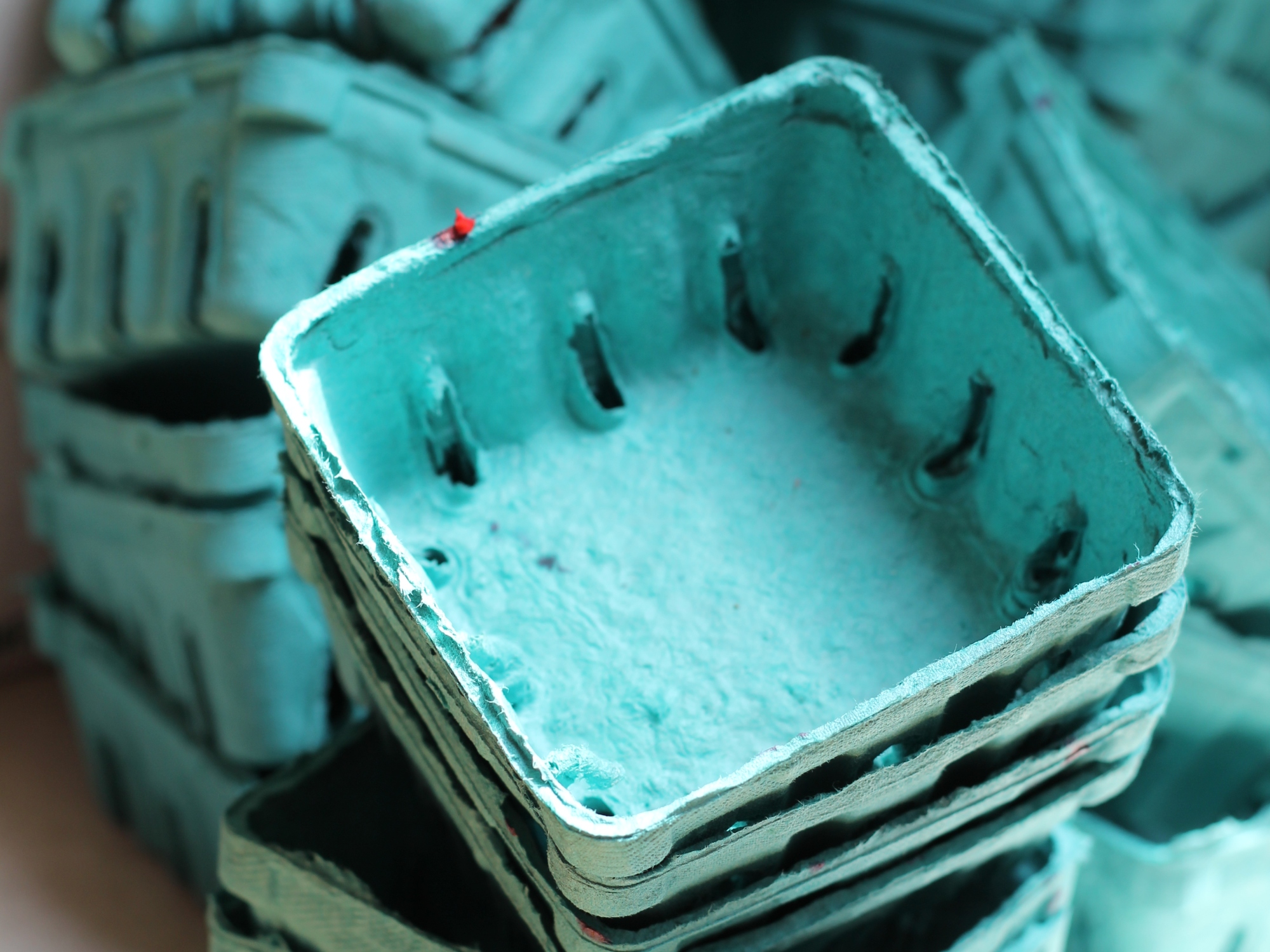 Last Sunday I went to the Farmer’s Market to buy a couple of flats of strawberries.  The husband and I intended to u-pick, but things are ripening early this year and we were busy and we missed it.  I annually make homemade freezer jam and we also like to freeze berries for the winter.  We were also looking forward to strawberry shortcake and there were visions of strawberry lemonade with vodka dancing through our heads. 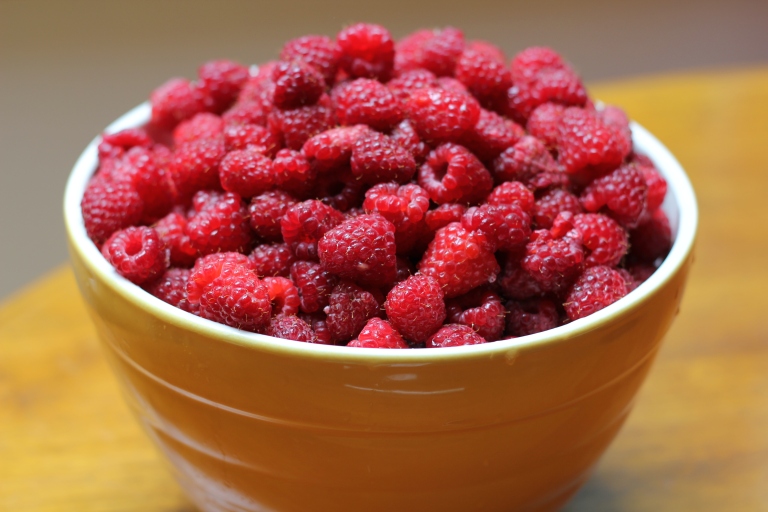 I started with the pie.  A great many people don’t make pie because they’re intimidated by crust-making.  Let me assure you:  making pie crust is not difficult.  I’ve been making crust since I was a kid.  Because, ironically, my mom doesn’t like making crust. Like you, she is perfectly capable and has had to do it herself since I left home many years ago.

I come from a family of homemade pie makers.  “Store bought pie” is a curse word in my family.  They’re too sweet and the crust is not great.  You should be able to taste the fruit.  It should have a tang.

Pie crust makers can be a bit snobby when it comes to crust ingredients.  Butter or shortening?  Lard?  Chilled or unchilled ingredients?  I am a simple crust maker both in ingredient and form.  My crust is made of Crisco shortening, flour, salt and cool water from the tap.  It’s the same recipe that my Mom uses.  And probably my Grandma.  Actually, I found the recipe a few years ago in this little beauty:

Note the cost.  Copyright 1953.  The recipe for crust can be found alongside other jewels like Salmon-Rice Casserole and Scalloped Potatoes with Vienna Sausage.

Back to the crust:  I think the more you think about it the more apt you are to screw it up.  I toss the flour (2 c) and salt (1 tsp) in a bowl and mix it together.  Then I plop in the shortening (2/3 c).  Then I get in there with my fingers.  I do not use a pastry blender.  I take off my rings and go to work.  The shortening is worked in until the mixture is like coarse meal.  I then add around 6 tblsp of cold water and mix it until it forms a ball. The key is not to over mix. 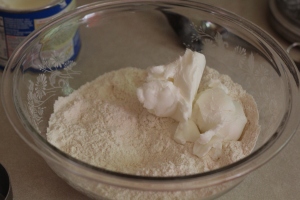 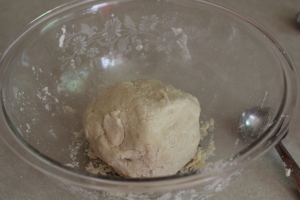 Split the dough into two balls, lightly flour the counter and roll it out.  My rolling pin is a thing of beauty.  It’s a KitchenAid. You could crack someone’s skull open with that sucker.  It was given to me by my Grandparents at my rehearsal dinner. Apparently it is a tradition in my family to receive a rolling pin for a wedding gift.  It’s intended to help keep your husband in line. Lucky for me they also took into consideration that I would actually use the thing for baking and got me a nice one.  I am happy to report, after 7 years of marriage, that I have yet to chase the husband about the house with the rolling pin. And I’ve used it to make many a pie.

After rolling out the crust fold it in half, pick it up, set it in the pan, unfold.  Viola! 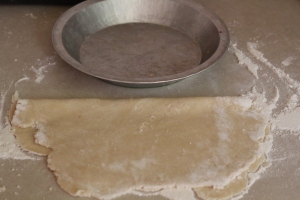 Now, filling.  Here’s where things go off the rails a bit:  while I use a recipe for crust, I do not use one for filling.  I took a bunch of raspberries and I added a bunch of cornstarch and sugar and a little cinnamon.  What I’ve learned with raspberries is that, when cooked they are a) very juicy and b) very tart.  When it comes to raspberry pie I always add more sugar and cornstarch than I think I need.

Once the filling is in, roll out the top crust, fold it in half, place on pie, unfold.  I usually trim the edges to make crimping easier.  I use a “roll under” style and then crimp it with my fingers.  Here’s another thing about pie:  does it really matter what it looks like if it tastes good?  I don’t do shapes, I don’t bother with an egg wash (which gives you an even brown look on top).  I just slap it together and bake it. 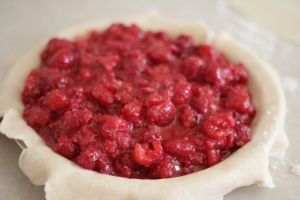 Poke some holes in the top, dust it with a little sugar, put some foil around it and cook it for approximately an hour and twenty minutes at 365 degrees.  Pie!

Once the pie was in the oven I turned my attention to the jam.  Oh, raspberry jam.  It’s good on cereal, yogurt, toast, english muffins, pancakes, waffles, ice cream.  If you ask my husband, jam is best eaten straight from the carton with a spoon. Actually, I caught him the other night scraping the last remnants of blueberry jam from a carton with a spatula.  A spatula!!

The husband was introduced to the joys of freezer jam when he met me.  He is in love.  With me or the jam?  Well, let’s just say I wouldn’t want to make him choose.

Freezer jam is another family tradition.  Many people do a cooked jam in a hot water bath.  Bah!  Too much work.  Plus, I find freezer jam to have such an amazingly fresh taste compared to a cooked jam.

I usually make double batches of jam.  A double batch makes 7-8 pint cartons.  The key to freezer jam:  sugar.  Lots and lots of sugar.  Enough to make your teeth hurt when you’re making it.  Enough to make you think, “This can’t be good for me.”  Well, probably not, but when it’s homemade it has a few simple ingredients, so it’s got to be better than some of the other crap we eat.

Freezer jam consists of fruit, lemon juice (in most instances), sugar, corn syrup and pectin.  I prefer MCP pectin.  I don’t know that it’s different than others, it’s just what I’ve always used and I also prefer their recipe.  They kindly put a whole sheath of recipes inside that little box. 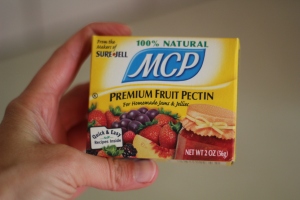 Freezer jam is also very easy:  crush the fruit and measure it, along with the lemon juice into a large bowl (you do need exact measurements or you could have a jam fail, which means it’s soupy instead of softly firm), gradually stir the pectin in and set it aside, stirring every 5 minutes to dissolve the pectin.  Then add the corn syrup.

Next comes the work:  stirring in the sugar.  You’re supposed to stir that stuff until the sugar is completely dissolved an no longer grainy.  I’m never quite that patient.  I do stir.  A long time. But…well….there still may be a little grain at the end of the day.  My jam, in most instances still sets up. 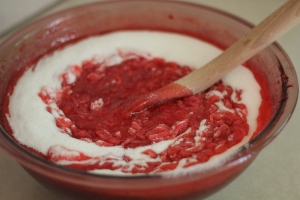 Ta-da!  Jam and pie and a whole bowl of berries leftover to eat.  And a few for the freezer.