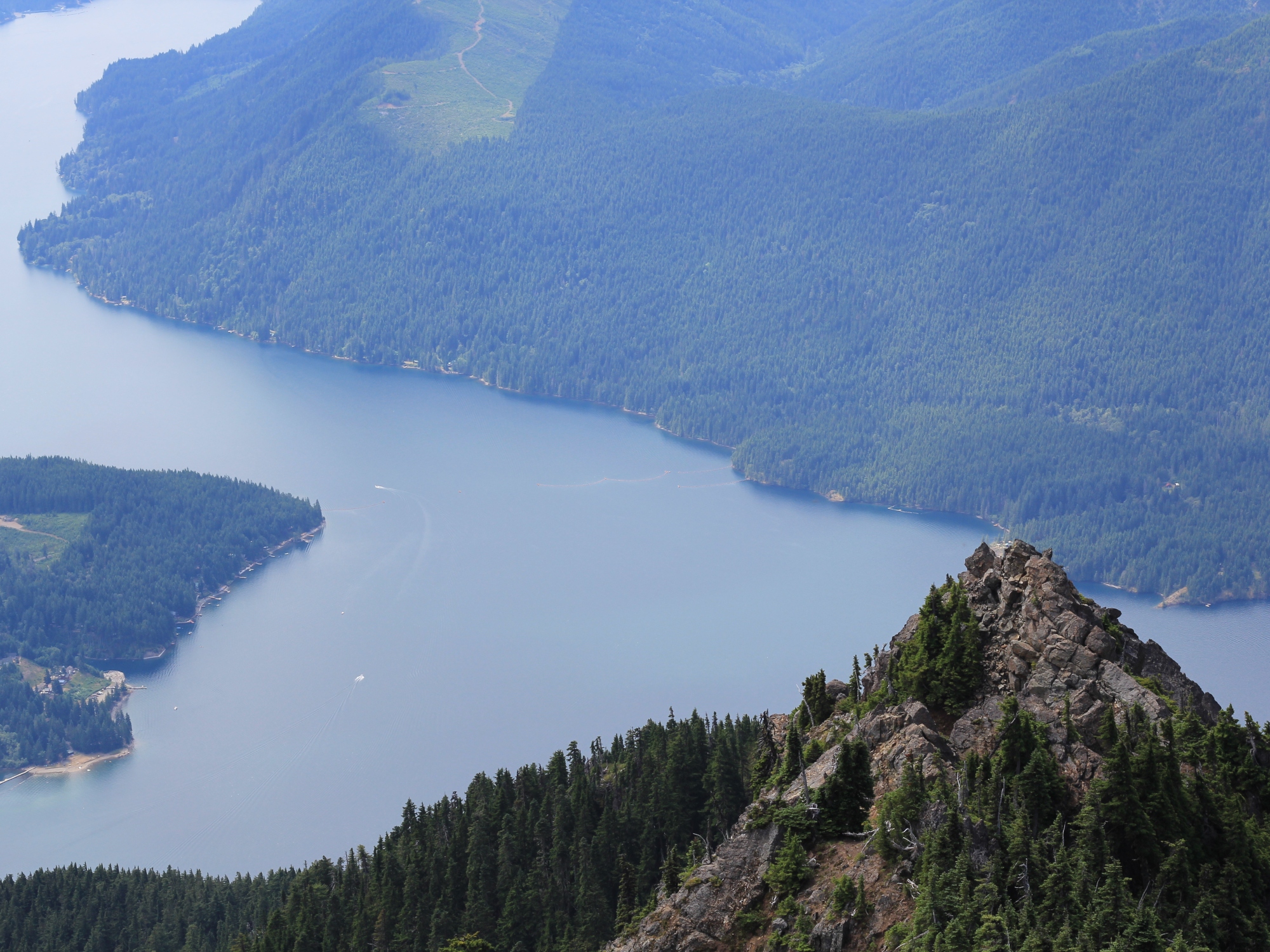 Yesterday we hiked Mount Ellinor.  My husband drags my hide up that beast of a hill every single year.  I don’t know why I agree.  She makes me mumble.  She makes me puff and pant.  She makes my legs quiver.  I did get a vanilla salted caramel ice cream cone in Hoodsport afterwords.  That made things better.

Mount Ellinor is on the southern edge of the Olympics.  Part of the reason we trek there annually is because of her proximity to our home.  She’s pretty close–an hour and twenty, give or take.  To get to Mount Ellinor you head north on 101 to Hoodsport, WA, where you hook a left at the signs for Staircase and Lake Cushman.  Up that road a ways, right at the stop sign, gravel road, another left, another left, more gravel (though only about 7 miles).

We arrived at the trail head at around 8:45 am.  We knew it was going to be a scorcher of a day (it was 92 degrees as we drove home later in the day) and wanted to be off the trail before the heat of the day.  There were already quite a few cars at both the lower and upper trailheads when we arrived.

We signed in at the trailhead headed out (up).

Let’s step back for a moment so that I can explain my relationship with this mountain. I’ve hiked Ellinor four times now.  I can never remember if the first time was late spring or late fall, but we were camped in the Cushman area.  The husband, who had been up Ellinor before, convinced me to go.  I didn’t know what I was in for.  This was also before I had a good grasp on hiking.  Which means I was wearing cotton. These days it’s wicking fabrics all the way.  And hiking shoes or boots.  And treking poles. And a good pack. 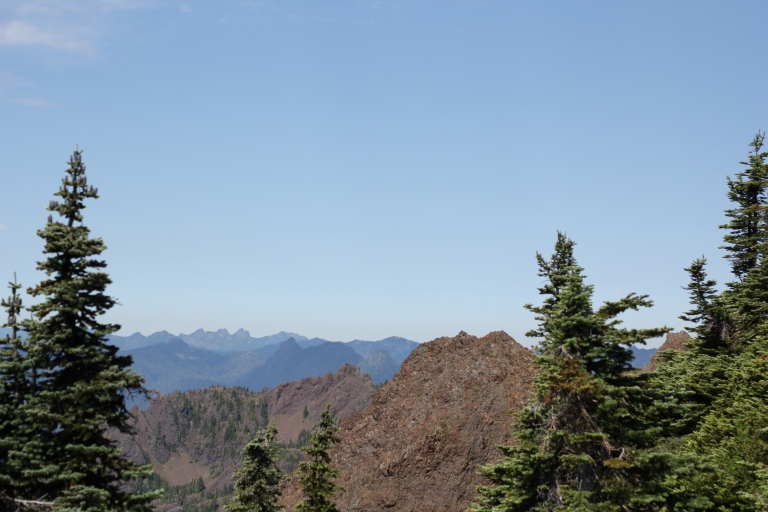 Anyways, what I remember most vividly from that inaugaral hike was the weather.  In that 3.2 miles we endured mist, rain, sleet and, at the top (5900 feet), as we stood in the fog, it began to snow.  It was not my best hike.  We returned to the truck soaked and cold. I swore I would never go back.  Why, then, was I on the mountain for the fourth time yesterday?  My husband went up by himself the next year.  I refused to go.  But, then it began to bother me.  It bothered me that this mountain had completely kicked my ass.  So, I sucked it up and, when the next summer rolled around, said I wanted to go.

That next hike was better.  By “better” I don’t necessarily mean “easier.”  Ellinor is never easy.  But, conditions were better. However, we again got to the top and had a very limited view. 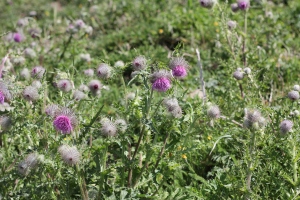 That was not our view.  That was thistles from yesterday.

Third time is the charm.  Last year we went up Ellinor on a very clear day and I finally understood what all of the hub-bub was about.  Ellinor offers 360 degree views.  On clear days you can see Mt. Rainier, Mt. St. Helens, Mt. Baker, Mt. Olympus…who am I forgetting?  It’s a who’s-who of mountains.  Spread below you (faaaaar below) is Lake Cushman, Hood Canal, Puget Sound.  To your left, in the distance, the glimmer of downtown Seattle (yes, really!)  That, my friends, is what makes that beast of a lady a worthwhile hike.

Let’s get back to this year:  the first part of the trail is forested.  Do I need to say that you go up?  The entire hike is up.  As we made our way up the wooded trail birds twittered and, the more we climbed, the more bear grass popped up.  I love bear grass. I don’t know why.  It’s just cool.  We saw a lot of it yesterday.  I was delighted.

We ran into a few people on their way down.  They actually had the right idea…getting a very early start.  It was a little after 9 am, already in the low 70’s and the temperature, combined with the trail, equaled immediate sweat. 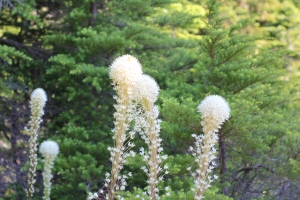 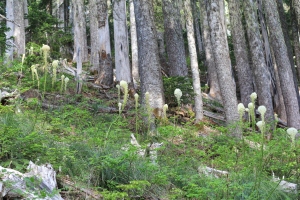 You eventually, after a series of switchbacks, climb above the forested treeline.  That’s one cool thing about Ellinor–she’s a diverse hike.  You begin to work your way through a series of steep…chutes…is really the only way I can think to describe them, though they’re really not shoots.  The trail briefly levels out at the first of many panoramic views.  It was quickly obvious that we were going to be dealing with some haze and that our views were not going to be as spectacular as the year before.  Mt. Rainier was difficult to see, Seattle difficult to pick out.

Next comes the rock strewn slopes.  Lots of big rocks, lots of loose rock.  This is not a trail to wear flip flops on.  We began seeing other flowers:  purple penstemon, aster, lupine, flox, heather, columbia lily, you get the idea.  Lots of flowers.  Lots of butterflies.

And we climbed.  And it was hot.  And I began to smell myself.  And every breeze was welcome. 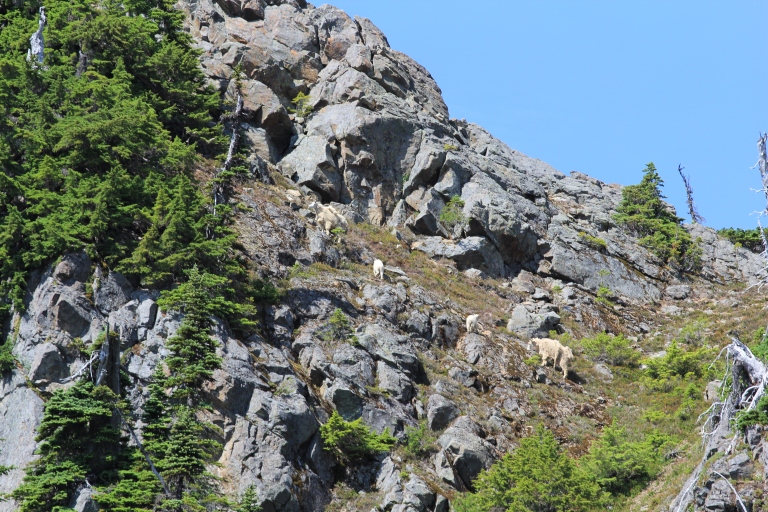 Shortly before we got to “the stairs” we noticed a few other hikers stopped and looking up a hill to the left.  Mountain goats! Two mamas, each with a baby.  Awwww….so cute. You could hear the babies complaining as they made their way gracefully up a very steep hill and over the other side.  The earlier picture in the post was of one of the mamas and her baby. 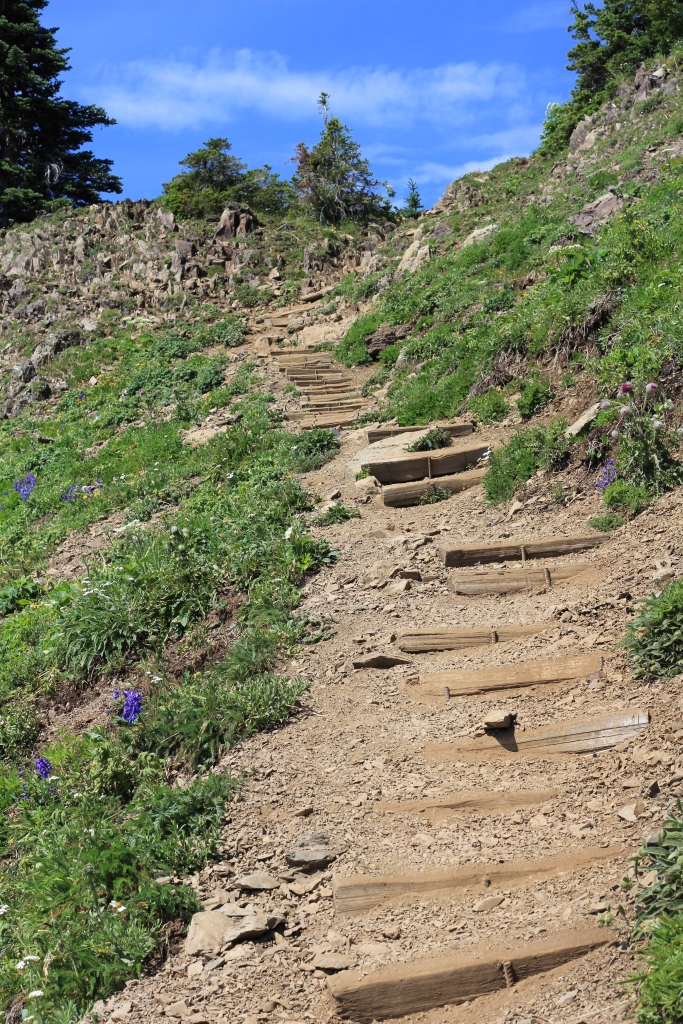 Next came the stairs.  I attempted to count these before as I puffed my way up them, but I always seem to lose count.  That could be because this is an area that consistently, given it’s openness, has great flowers that distract me.  Or, the cursing in my head could also result in loss of count.  I know it’s at least 100.  The photo above is only part of the stairs.  This was the only section I was able to catch without people on it.

Those who are not familiar with Ellinor often think that the top of the stairs is…the top.  Because, when you’re down on the stairs, it looks like that may be the top.  But, she’s a mean one, Mr. Grinch. Nope.  Not the top.  You continue up.  Then you scramble up a particularly rocky, steep part (which really freaked me out the first couple of times I did it), then you go around there and over there and then……you summit!

We always spend a little time on the summit.  Actually, we always spend a little time at any turn-around point.  I mean, really, if you’ve hiked in or up or down, why not stop and enjoy the scenery for a while?  Recover a bit.  Change your socks if you’ve sweated them into a swampy mess.  There were only a half dozen other people at the top (though three were the noisy girls that we attempted to avoid on the way up), which was nice as sometimes it can be grand central station up there. We had lunch, enjoyed the filtered view, fended off the very friendly chipmunks, and finally started back down.

We ran into a pretty steady stream of people going up as we worked our way down.  Just after reaching the treeline (ahhh…shade…and bear grass) we saw a male mountain goat about fifteen feet off of the trail also enjoying the shade. That was pretty cool.  We made it back to the car by around two and headed down the hill (with that stop in Hoodsport for ice cream).

Another good (is that the word I want to use?) day on Ellinor.  Until next year, you beastly hag!