Staying pretty close to The Homestead this weekend.  For a couple of reasons: first, the husband (and hiking partner-in-crime) is out of town.  He went to ID for a quick family visit.  Second, I’m still fighting the residuals of a summer cold (what an oxymoron) and am not feeling very energetic, though I’m trying to convince myself otherwise.

However, on a day like today it is an absolute crime to stay indoors, so I took myself out to Woodard Bay for a short walk.  I’ve not been out there since they reopened and was impressed with what they’ve done with the place.  I’ll explain the closure shortly.

There are a couple of options at Woodard Bay:  you can either do a straight shot down the wide, paved road (no vehicles or bikes allowed) to the bay or you can take a wooded trail that winds itself around for a mile before dumping you shortly before the bay.  I recommend the trail. 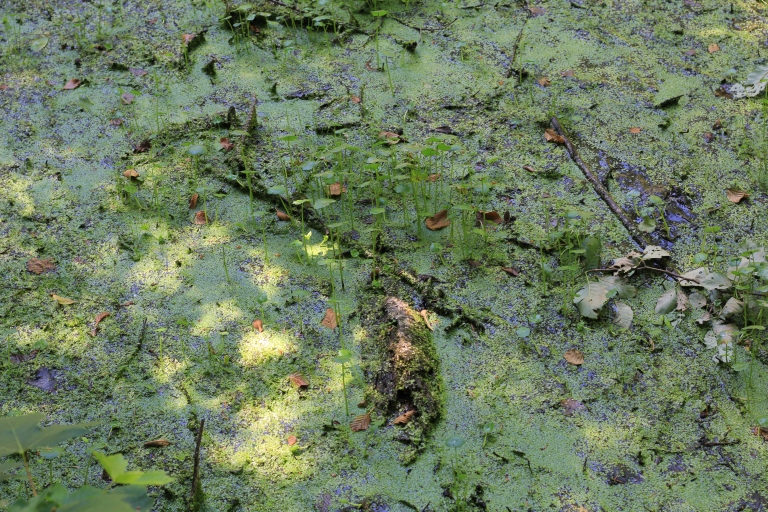 I took my time on the trail, enjoying the lush green, the sun shining between the trees, the happy birds singing happy bird songs.  I took the new camera, of course.

The history of the area that I’m going to share below comes from the signs that they have posted out at the bay.  Handy.

Wait, before I get to that…geese!  I headed to the new viewing area and, as I approached, heard the familiar warning honk of the guard goose.  You know, the one they set out to keep watch.  I saw him, but couldn’t quite figure out what his problem was until I got closer.  Goslings.  Older goslings, but goslings nonetheless. I told him to unruffle his feathers (he didn’t) and settled in to take some pictures of the geese and goslings scattered about the shoreline.

In January 1900, Frederick Weyerhaeuser and a group of Midwestern lumbermen bought 900,000 acres of Pacific NW forestland and launched the Weyerhaeuser Timber Company.  Weyerhaeuser established lumber mills in Everett.  The company harvested timber south of Olympia, then brought the logs by rail to southern Puget Sound and towed them by water to the mills.

Woodard Bay was ideal for switching logs from railcar to raft.  It offered deep water for dumping and sorting the logs and was sheltered from the wind. The company purchased the land and built the South Bay Log Dump. Construction of a rail line, Woodard Bay trestle and Chapman Bay pier brought major changes to the shoreline at Woodard Bay.

The South Bay Log Dump received its first load of logs in 1928.  For the next 56 years the log dump was a busy operation.  Every day 3-4 trains arrived, each with 40-60 cars loaded with logs.

The above picture is my favorite of the day.  Sometimes it pays to get low.  🙂

In 1979, the volume of logs moving through South Bay began to decline.  The Everett mills became obsolete.  Timber was increasingly shipped to other mills, and eventually the log dump was no longer needed.  The last logs left South Bay in November 1984. After the log dump closed, the 1987 Natural Resources Conversation Areas  Act opened the way for the State of Washington to purchase the area from Weyerhaeuser. 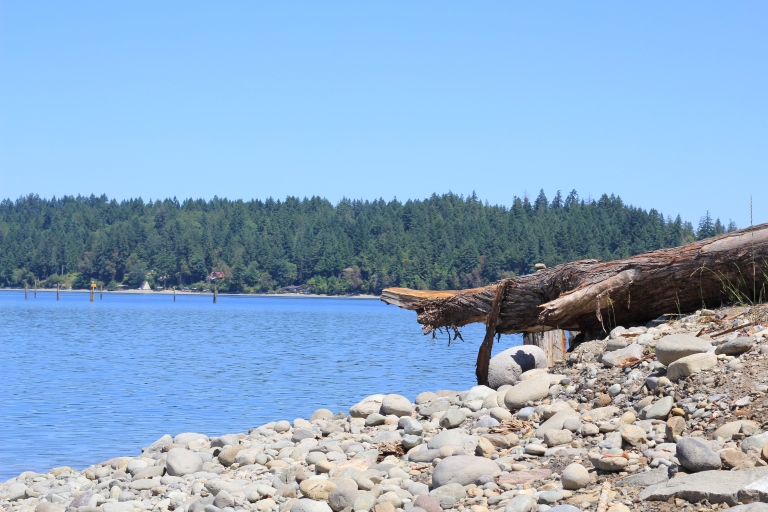 About a year ago the Dept of Natural Resources closed the Woodard Bay area down for removal of remnant structures in order to restore more natural tidal flows and minimize pollution.  Workers removed the old railroad trestle that crossed the mouth of Woodard Bay, as well as thousands of cubic yards of dirt and other fill material that connected the trestle to the shore.  2140 tons of creosote from the trestle was removed to reduce pollution along with 1220 creosote-laden pilings. 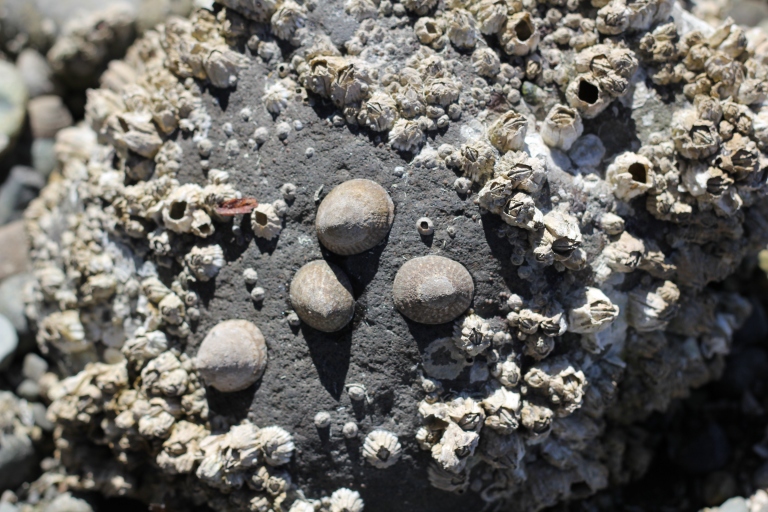 DNR also improved the picnic area at Woodard Bay, installing a covered picnic area, new restrooms and an additional viewing area.  I give it two enthusiastic thumbs up.

See the sparkle in the middle of the above shell?  Cool, huh?

I wandered along the shore away from the dozen or so people enjoying the bay. And indulged in a favorite activity from childhood….turning over large rocks and watching the itty bitty crabs scatter.  However, the grown-up version involves taking pictures of the scattering crabs.  How many do you see below?

And there’s always one that takes a stand. That’s right, buddy, wave those pinchers in the air like you just don’t care.

Nice day for a walk.  Hope you took one, too.

8 thoughts on “A Sunny Day at Woodard Bay”