Yesterday the husband and I went on our inaugural summer hike.  We could have gotten out earlier in the season because it’s been so mild in Western Washington, but we’ve been busy with other things.  Part of the joy of hiking is choosing the hike.  About a week ago I asked the husband where he wanted to go:  Mt. Rainier or Mt. St. Helens.  He chose Rainier.  I began researching.

The Washington Trail Association website is hiking porn to me.  I drool over trip reports, admire photos, and save trips to the “My Backpack” feature for future consideration.  If you find yourself using their site with regularity please consider a donation.  They’re a non-profit and do amazing work to maintain our trails.  I also have a series of books, the “Day Hiking” series, that are associated with the WTA site and provide many of the same hikes.  I like having the paperback form because, well, I like paper. And, when we’re headed off on a trail I can take pictures of the pages describing the hike in question and not have to lug the book.

I considered and cast aside a few hikes (Van Trump Park, Carter Falls, Gobbler’s Knob) before zero-ing in on the winner:  Indian Henry’s Hunting Ground. According to WTA, Indian Henry was an early mountain guide.  Pictures showed a rustic ranger cabin in a meadow full of flowers.  I knew we wouldn’t see flowers like that early in the season, but was hopeful for something along the way.  I knew I could count on trillium as it’s a spring bloomer.  I hoped for more…and got it. 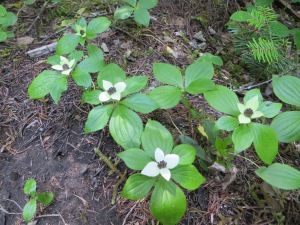 WTA lists Indian Henry’s as a 12.6 mile hike with a 2500 foot gain.  12.6 was a little more than I was aiming for since it’s early in the season and we need to get our hiking legs in shape, but it didn’t seem unreasonable.  That was my first mistake.  When do you not deviate during a hike? Oh, let’s go down to that stream here or let’s go over and look at that over there.  I should automatically add a mile or two to any hike.  I should also have remembered that my hiking shoes are relatively new as I got them late in the season last year.  Ha!  We’ll get to that later. 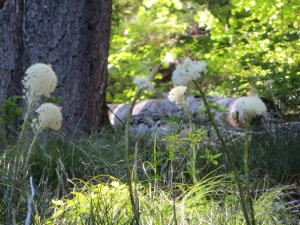 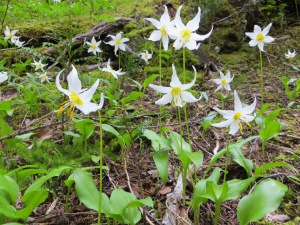 We headed for the mountain at 7 am, with a slight deviation to a favorite coffee shop.  Mocha for him, vanilla chai for me, off we went!  It took us a bit under two hours to get to Longmire, where we parked and hopped on the Wonderland Trail. The first few miles felt like a nice stretch of the legs.  It was an absolutely beautiful day.  Within 45 minutes I was down to short sleeves. We gradually wound our way up a ridge, then dropped down into the Kautz Creek valley where we were rewarded with our first mountain views from the trail.  She is a breathtaking beauty.  Every time I see that mountain I fall in love all over again.  I should note that I was rewarded with trillium along the trail, along with some bunchberry (dwarf dogwood).

Don’t get to impressed with my flower identifying skills.  I know some flowers/plants just because I grew up in a similar climate on the Oregon Coast. However, I also have a magnificent flower bible called, “Wildflowers of the Pacific Northwest,” which allows me to take pictures and come home and identify.  This 500 page tome is too hefty to take on the trail. 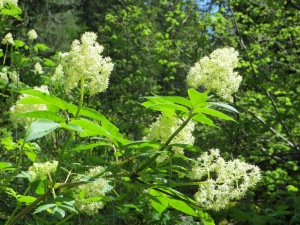 Crossing the Kautz Creek valley was impressive.  Erosion is evident all around.

A number of streams rush through the valley, including the icy cold, crystal grey Kautz Creek.  I love the look of glacier streams. There’s something about their color that is indescribable. Milky, grey, fast moving.  On a warm day there is nothing like crouching next to one of these streams or rivers to wash your hands and splash water on the back of your neck. 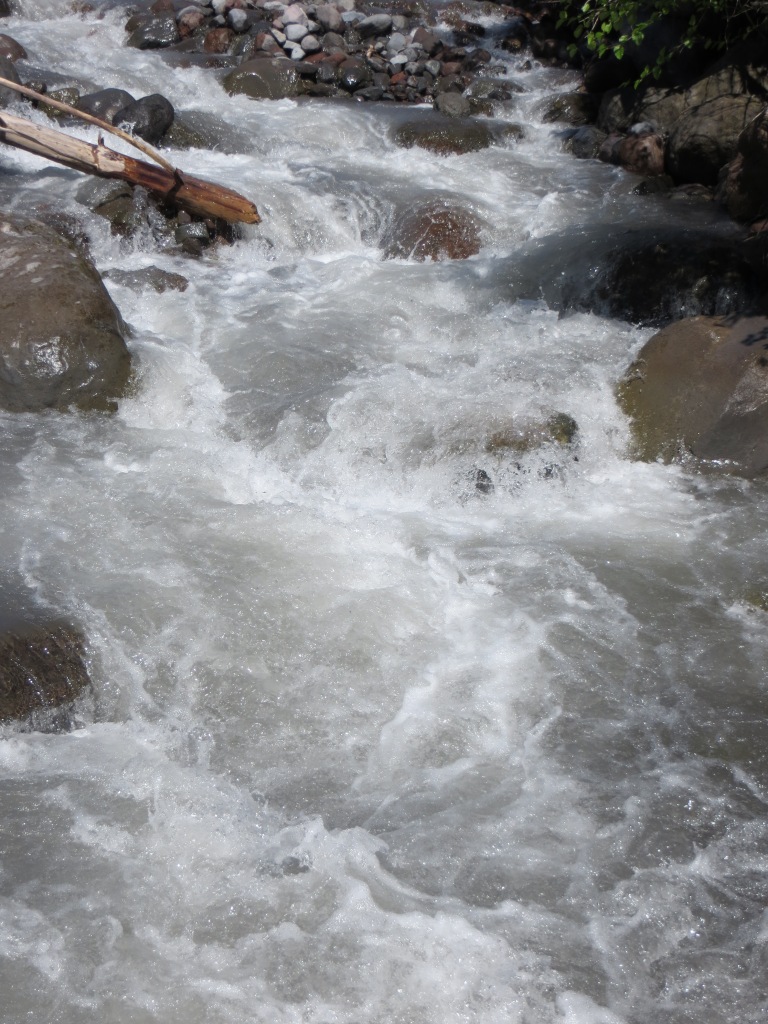 After crossing Kautz Creek we began our climb.  That’s what we did for most of the rest of the hike:  climbed.  It was a puffer, but not unbearable.  And, we kept telling ourselves that the trip down would be easy…simply tuck and roll.

However, there was a reward to the climb:  the icicle lilies are making an early appearance.  For miles and miles we saw icicle lilies.  In spots they blanketed, in other spots they were sparser.  But, what a sight.  We must have seen tens of thousands of icicle lilies.  And there were so many more plants yet to bloom.  It was stunning yesterday.  In two weeks it is going to be amazing.

We met a ranger shortly before reaching Devil’s Dream Camp and asked him if we were approaching the meadows.  He said we were getting there.  We should have listened to the “getting there” and not heard, “right around the corner.”  Bellies were starting to growl, but we took enough time to check out a waterfall along Devil’s Dream Creek.

This is where I should mention the fracas with Map My Hike, an app that I use for all of our hikes.  Somehow the app got discombobulated (I’m sure this had nothing to do with user error or fat fingers) and gave us our mileage in kilometers instead of miles. Which means we had to convert.  Which we’re perfectly capable of doing (well, it requires some thinking and finger counting for me), but it got tiresome so we kind of quit.

After passing Devil’s Dream the trail flattened a bit and we started coming into some meadows.  We thought we were almost there (meaning, just around the corner), but it was another mile or two of steady (but not butt kicking) gain. We hit a few patches of snow around Squaw Lake, but it only heightened the beauty of the area.  We continued to be surrounded by avalanche lilies and, as we reached the lower meadows, they were joined by sunny glacier lilies.  I should also note that we saw some early beargrass.  And, once we reached the lower meadows, white daisy tidytips dotted the edges of streams.

And, then, finally, the cabin!  There it sat, amongst trees against the meadow. Its backdrop?  Mt. Rainier.  To that point, we had seen few people.  So few, in fact, that we felt compelled to keep remarking upon it.  For some reason, they came out of no where when we reached the cabin.  I’m not talking droves, probably about 10-12, but we had hoped to have the cabin to ourselves.  It was locked up tight as it’s only open when there is a ranger on site.  We went to the back of the cabin, which faces the mountain, pulled up a rock and pulled out lunch.

After enjoying a leisurely lunch we packed up and headed back down.  Down always sounds so good when you’re going up.  Then your feet start pounding against the front of your shoes.  And your knees start to weaken due to the constant down.  Now, that did not stop me from stopping to pick up baby pine cones.  I am a gatherer.  I like rocks.  I like pine cones.  I like pretty outdoor things. On the way up I noticed that the trail was, in sections, littered with miniature pine cones.  As we headed back down I pulled my sandwich bag and a quart bag from my pack and announced to the husband that I wanted to take pine cones home. He groaned.  I told him that at least it wasn’t rocks (as I always want him to carry the rocks in his pack rather than hauling them in my own) and proceeded to fill both bags.  I didn’t even need to sort, there were so many I scooped them up by the handful.  Turns out he had noticed the cones on the way up.  But, while I was thinking, “Oh, baby pine cones, I want some,” he was thinking, “Cool, pine cones that create a cushioned surface to walk on.”

Needless to say, by about mile 11 I was done.  My dogs were barkin’.  But, remember about deviation?  We had deviated a couple of times to check things out.  And, on the way down, we elected to add a mile and go around Rampart Ridge instead of straight down the way we came up.  Down, down, down we went. And, I ignored the things that I know:  I should have taken an extra pair of socks and changed at lunch.  When I started having pain I should have stopped, assessed, applied some moleskin and tried to help myself out.  But, I was a woman on a mission:  I was tired and ready to get off the trail.  Today:  a couple of wicked blisters and some generally roughed-up feet. 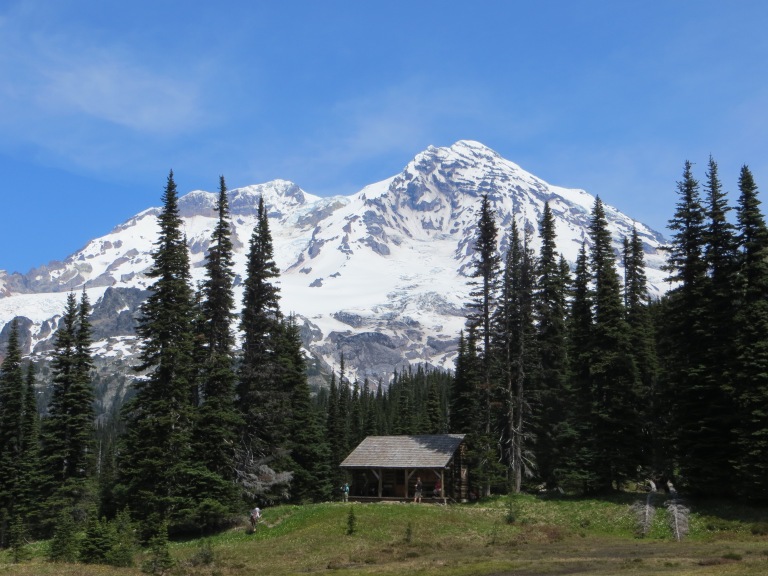 We finally reached the car.  Total miles:  15.5.  The husband said the hike was over-ambitious.  We were exhausted, hungry and thirsty.  We stopped for a soda (Orange Crush for me…my long hike treat), ate leftover snacks from the hike and headed home.  We ordered pizza and salad on the way and picked it up along the way.  Got home around 8, opened a bottle of wine, decimated the food, showered and were in bed by 9:30.

What an outstanding hike!  We’re thinking about going next weekend, too, but maybe we’ll do 8-10