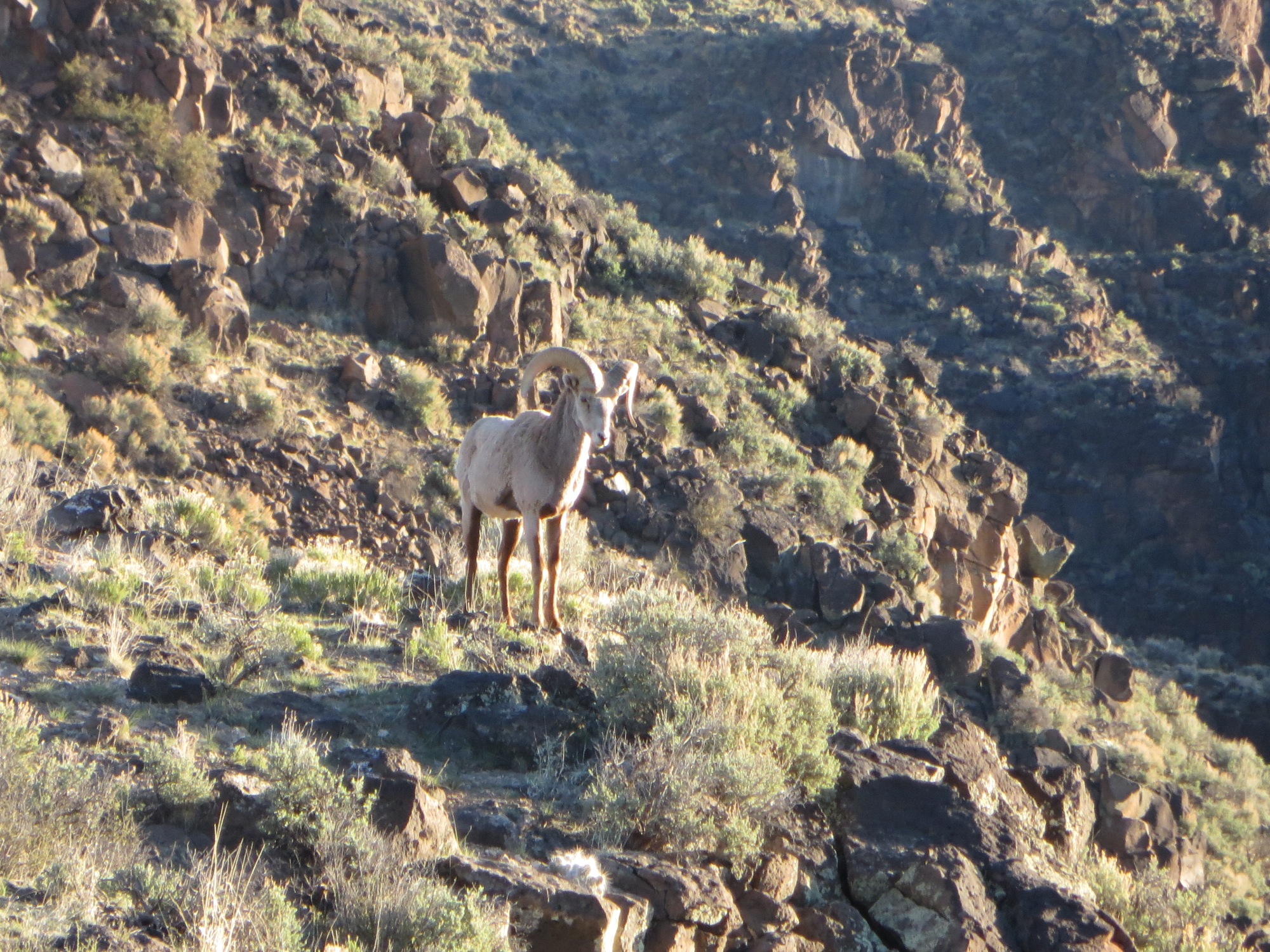 I was going to do one entry for our anniversary day, but I have too many pictures of the Rio Grande Gorge Bridge to do that, so I’ll do one entry about the bridge and my special experience out there and will cover the rest of the day in a different blog.  The photos are from our numerous trips out there at all different times of the day. 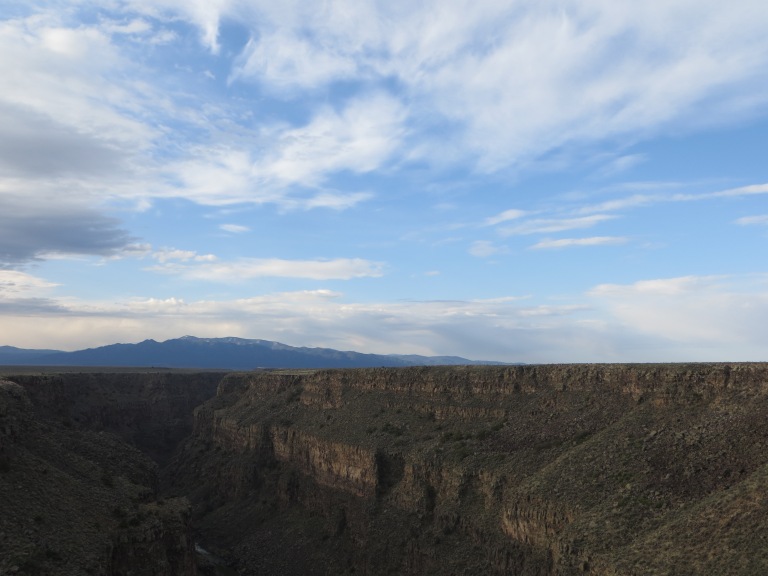 The husband and I were out at the Gorge Bridge the evening before our anniversary for sunset (I think we went out there 3 or 4 times total.  It was only 10 minutes from where we stayed and just kept drawing us back).  We agreed to get up the next morning and go out for sunrise.  I woke up a little after 6 am.  The sun was to rise at 6:25.  I poked the husband and he made groggy noises.  I whispered that I was going to go to the gorge.  It quickly became apparent that he was not going with me.  He came to regret that decision, as did I as I really would have liked to share what I saw with him. 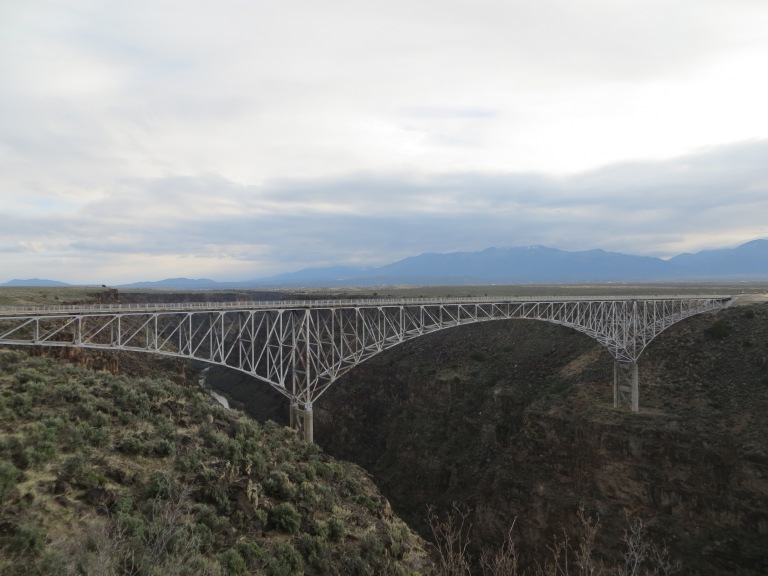 The Rio Grande Gorge Bridge, locally known as the “Gorge Bridge” and the “High Bridge,” is a steel deck arch bridge across the Rio Grande Gorge.  It is located 10 miles northwest of Taos.  At 650 feet above the Rio Grande, it is the seventh highest bridge in the United States.  It is…impressive.  Actually, the entire Gorge is impressive.  In that part of New Mexico you can see for miles and miles, but you don’t notice this gaping tear in the earth until you’re almost upon it. 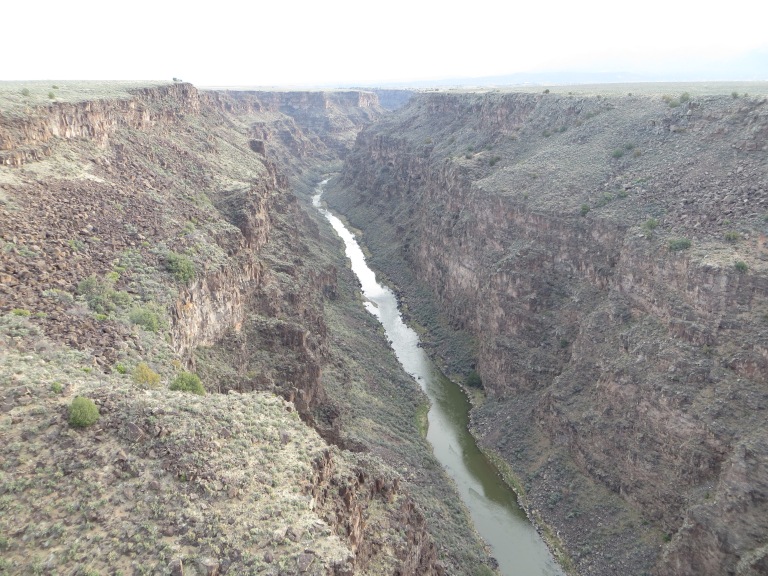 The bridge was dubbed the “bridge to nowhere” while it was being built because the funding did not exist to continue the road on the other side. 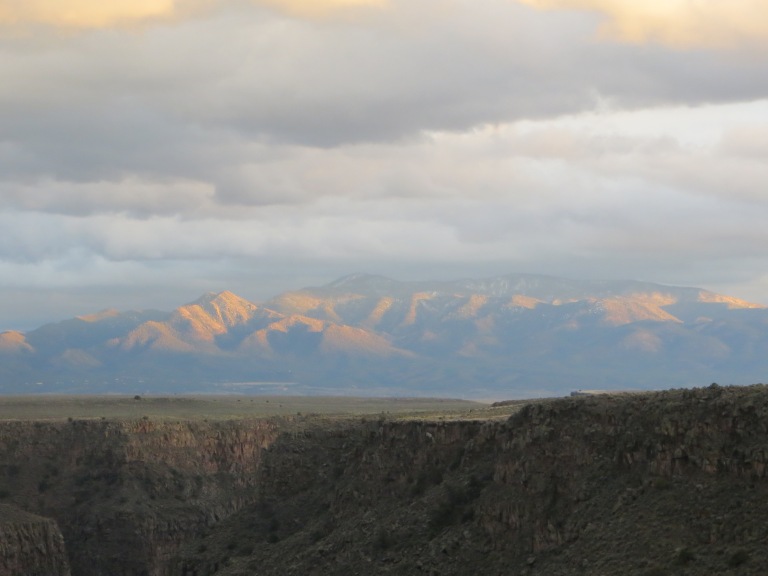 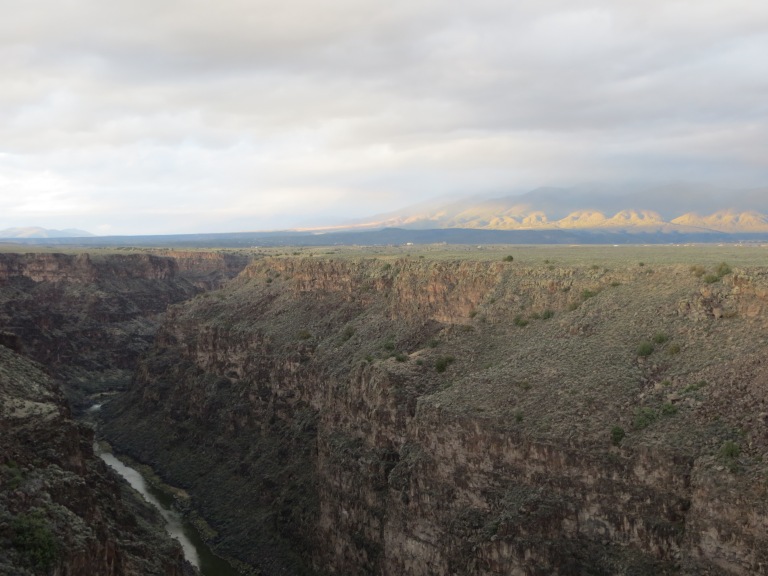 Anyways, I rolled out of bed and bundled up (we awoke to low 30’s every morning).  When I arrived at the bridge I was the only one there.  Not surprising at 6:30 am on a Sunday morning.  I began taking photos, criss-crossing the road from one side of the bridge to the other.  After a while I was joined by another couple.  I heard the woman say, “Are those elk in the gorge?”  I looked.  They looked very…small (it’s a deep gorge).  I pulled up my camera and cursed my little point-and-shoot.  I want a DSLR so I can get big lenses and zooooom to my heart’s content.  But, I digress.  They weren’t elk.  They were big horned sheep.  Now that, my friends, is cool. 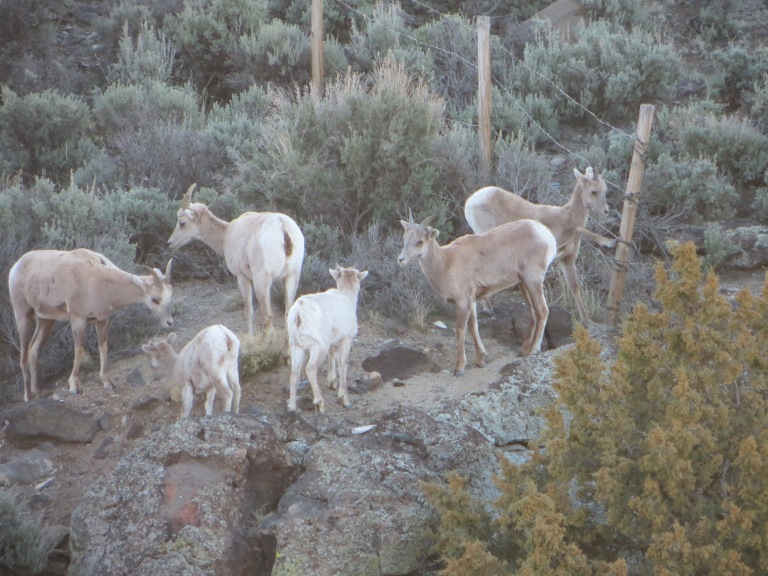 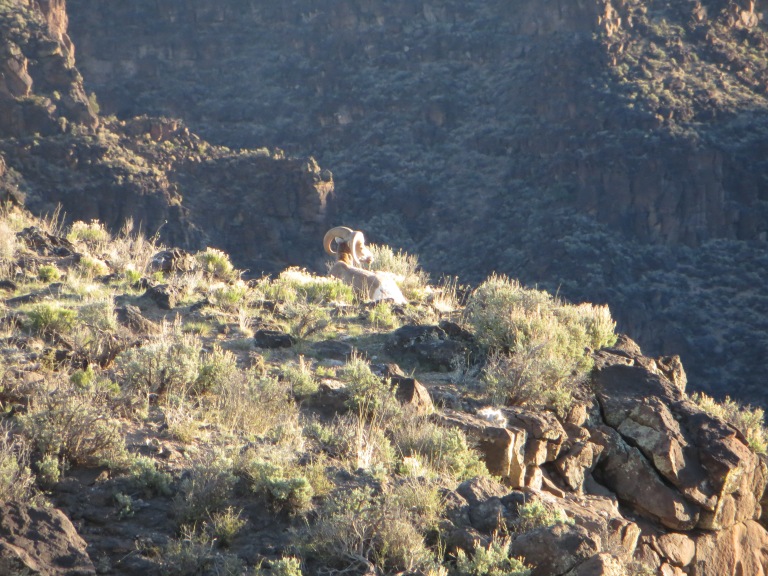 Down in the canyon stood four or five rams, intent upon breakfast.  That meant they didn’t raise their heads much, spoiling my shots.  After a bit I headed to the other side of the bridge and began scanning for other sheep.  Sure enough, saw a number of them on the top of the canyon, too far away to determine male or female.  Then I noticed a number of them near the start of the bridge span.  I approached, zoomed and…ewes and babies!  I was able to get close enough to watch them pretty clearly with the naked eye and it was a treat.  One of the babies was particularly rambunctious, attempting to head butt anyone within range (willing or unwilling). 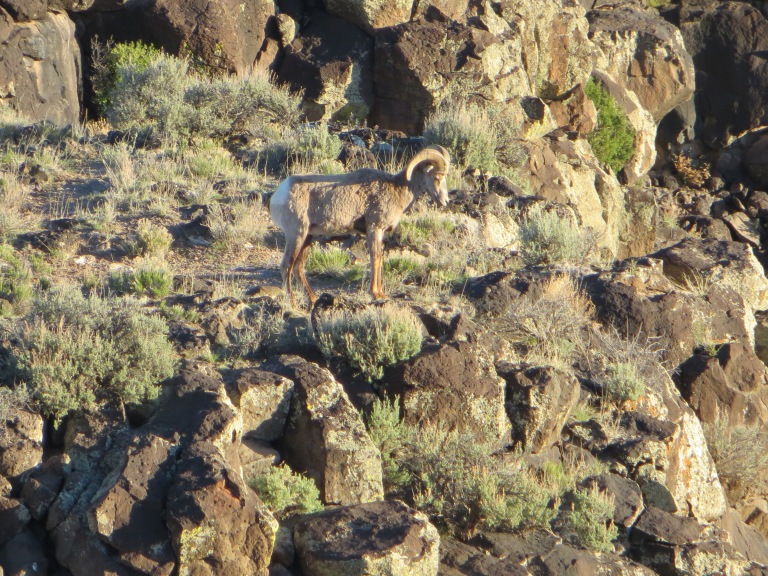 I headed back to where I had seen the rams.  A few had disappeared.  Then I noticed Mr. Ram.  Remember the old Mutual of Omaha commercial where the ram steps onto the edge of the cliff and stands there proudly?  That’s about what Mr. Ram did.  He was standing on the rim of the gorge in all his glory, surveying his domain.  He stood proudly in the morning sunlight (and I think he was eyeing the rams in the gorge below him).  After a bit he apparently tired of his glory because he laid down to catch some rays. 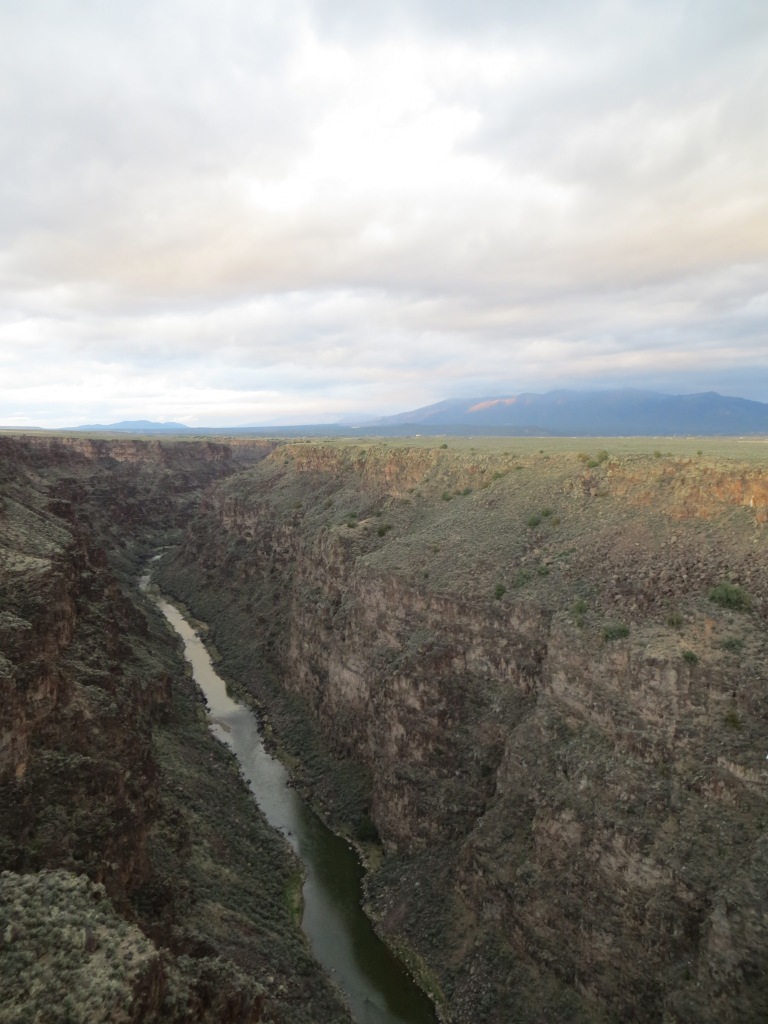 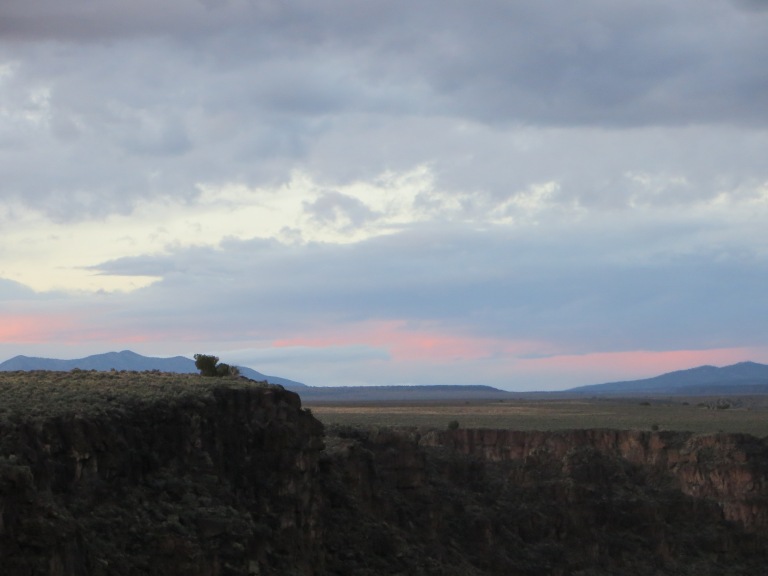 By this time I was cold.  Really cold.  I had two layers on under a down jacket, so my torso was warm.  But, tears were streaming down my face (and I was not crying over Mr. Ram, though he was beautiful) as a result of the cold wind and my fingers ached so badly that I was having difficulty pushing the button on the camera.  I actually considered sticking my fingers in my mouth, but I know that it would just be worse when I pulled them out.  I finally, reluctantly, scampered back to the car, cranked on the heat, and did a quick thaw.  After that, I took a few more pictures of Mr. Ram, then headed to town where I stopped to pick up coffee for my anniversary sweetheart.  It even had a heart on top in the foam (ahhhhhhh!!). 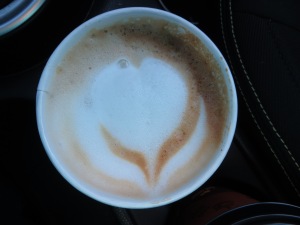