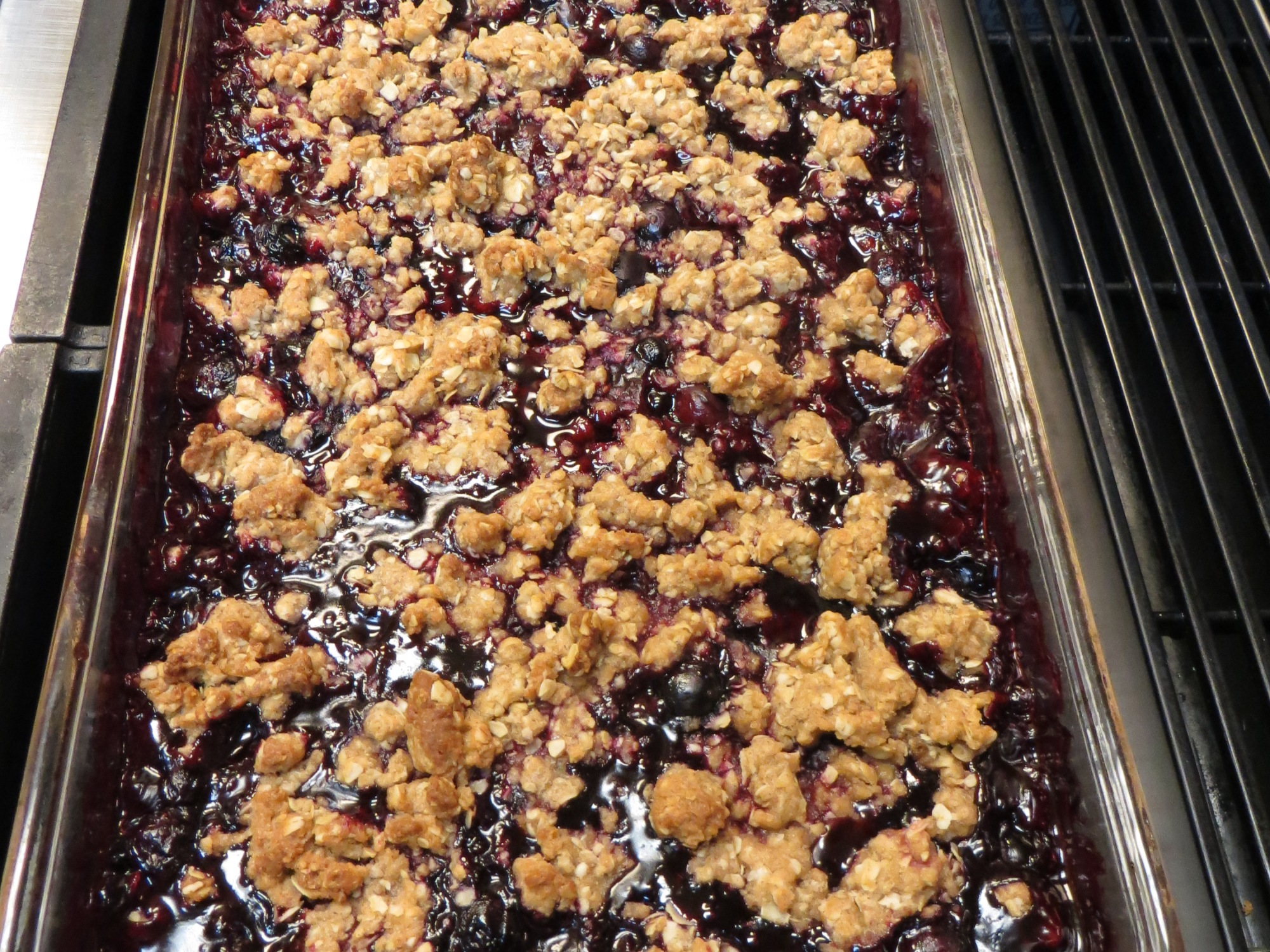 Last month we went to Oregon to visit the family.  Going to Oregon is always a treat because it means my Dad will cook.  He’s a great cook.  Actually, he should be referred to as a chef, at least in my book.
When I told my parents we were coming down my Dad immediately began talking about what he should cook for family dinner.  That’s what my Dad and I do.  We get on the phone and talk about what we’re cooking that night, what we’ve recently cooked and what we intend to cook that week.  It used to be, when they came to visit, that I would ask Dad, “So, what are you cooking?”  More recently I’ve preferred to cook for him…so I can show off a little and prove that I’m a chip off the old block.
Dad does 100% of the cooking.  Mom serves as chief bottle washer.  The husband and I have a similar situation, except it’s reversed.  I cook, he does dishes.  He does not mind.  He is happy, happy, happy that his wife is a good cook.  Because to me, cooking is love.  Every meal I cook for him is me telling him that I Love Him with a capital “L”.  Though he would argue that brussel sprouts, beets and cabbage are forms of love that he can live without.
Dad hasn’t always been a top chef.  When I was young Mom did the cooking.  At some point Dad became interested.  Some of his initial attempts were memorable.  To this day if you say the phrase, “Orange glazed carrots,” in front of my family you’ll see my brother’s face and mine scrunch up in memory and Dad grin.  Mom wasn’t home that night and Dad cooked.  I was young, but I still remember something resembling cooked carrots with a “glaze” that tasted like a thawed can of orange juice concentrate.  We had a dog at the time named Hoss (yes, after the character on Bonanza).  Hoss was a cocker doxen mix.  Black, furry, low to the ground.  Hoss would eat anything.  Well, about anything.  Even he wouldn’t touch those carrots.
Needless to say, Dad’s skills have improved.  Greatly.  He cooks for family dinners and for special occasions at the local Elks club.  Heck, he even put together the menu for my wedding rehearsal dinner and reception.  Not only put them together but organized the whole thing, too.  The day before my wedding it wasn’t the women in the kitchen chopping and prepping…it was my Dad, my Uncle, my Grandpa, my Cousin.  Those are the type of men I have in my family.  Don’t get me wrong, the women in my family can cook, too.  But, it’s cool to be surrounded by a bunch of men who can hold their own.
The whole point of this?  Dad’s a great chef.  We got up Saturday morning and he was already working on dinner.  By 10 am the blueberry huckleberry crisp was out of the oven. 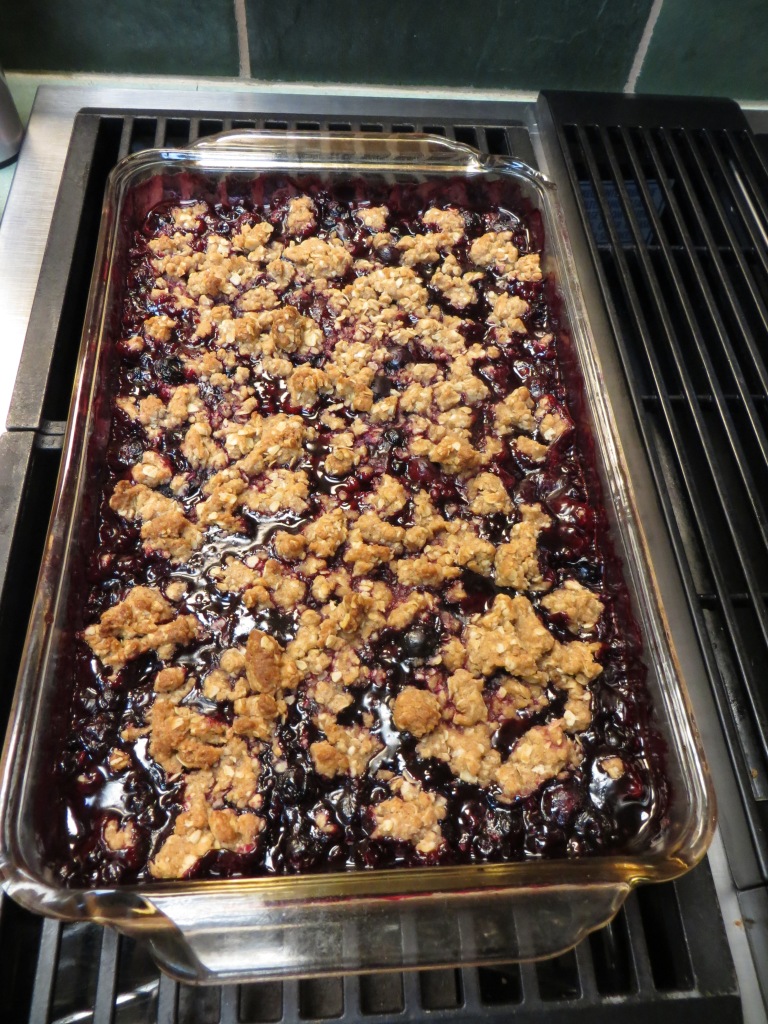 He was also marinating pork and cutting fresh pineapple for the skewers: 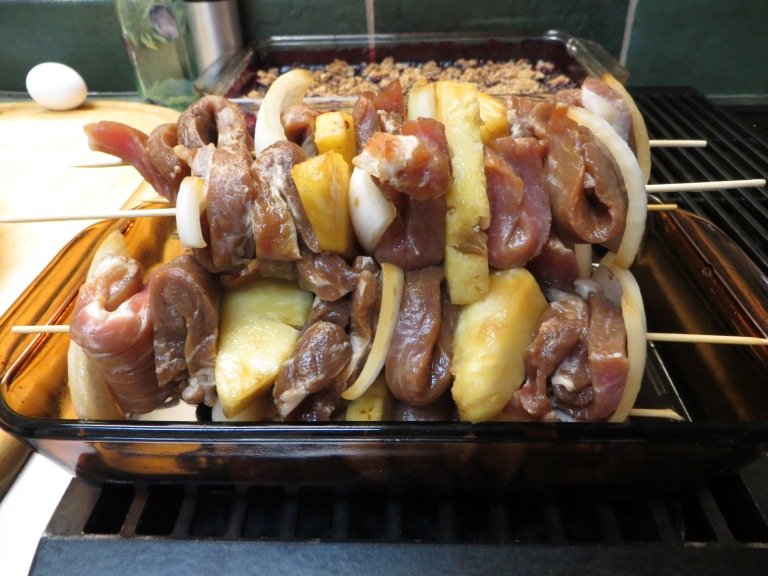 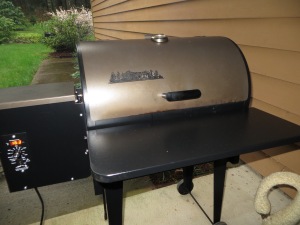 Dinner was also served with a green salad and homemade fried rice (and plenty of beer and wine). 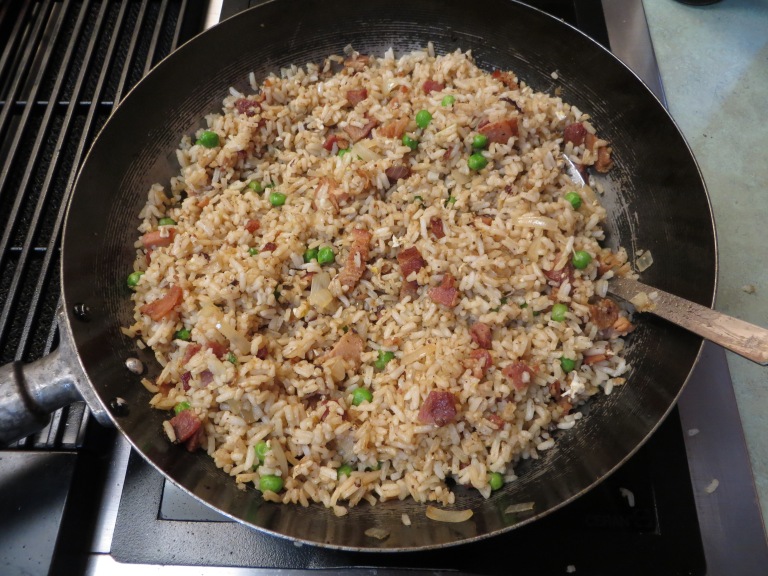 The husband and I sat at the “kid’s table” with my niece.  The kid who said almost nothing until she was 3 years old now, at 8, barely pauses to take a breath.  She’s fantastic.
And, overseeing it all was this little cutie, my parents’ spaniel, Patches: 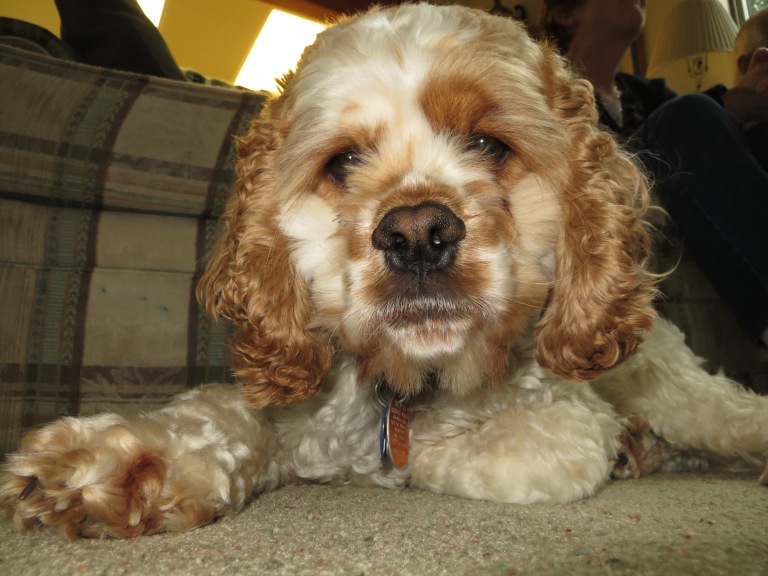 When people ask how I learned to cook I tell them I was pretty much self-taught (with the exception of sweets, I didn’t really start cooking until I lived on my own).  But, I’d like to think that the good cooking gene came from Dad.

4 thoughts on “My Dad the Chef”